Alexandra Hopper Irwin On Pregnancy & Motherhood Through A Rare Condition


When many of us are asked what we wish for our children, the answer is simple: "For them to be happy and healthy."

For Alexandra Hopper Irwin, it was never going to be quite that simple. At her routine 18-week pregnancy check-up, Alexandra discovered that her baby had a rare condition – congenital diaphragmatic hernia – or CDH. Discovering that her baby girl’s heart was on the right side and that a serious diagnosis was imminent, what was originally a standard morphology scan quickly became the worst moment of Alexandra’s life, and understandably, a raft of anxiety. “I see-sawed between blinding rage that this was happening to me and complete devastation,” said Alexandra. “One day I would be furious at anyone who was pregnant or had a healthy baby and the next day I was so sad I couldn’t even get out of bed. I just kept thinking ‘why me?’” After immediate surgery following her birth and a slow but ultimately beautiful recovery, Alexandra kindly her story with us, as well as that of her little miracle, Darcy.

Find out more about CDH.

Can you tell us a bit about yourself?

I’m 33 and grew up in Sydney with my parents and three sisters. My family moved to the US when I was 18 and I followed when I was 23 and lived in Los Angeles for two years working at a boutique investment bank. I returned to Sydney and I now work in funds management as a Corporate Affairs Manager. I live in Darlinghurst with my husband of two years, Luke. I love fashion, movies, reading, cooking and travel.

What did your life look like before welcoming Darcy?

My husband and I are quite social and we loved going out, travelling and trying new restaurants. We both had (and still have) demanding jobs so we would often have quiet nights during the week and I’d cook us dinner and weekends would be spent sleeping in, relaxing, exercising, seeing a movie or going out with friends. 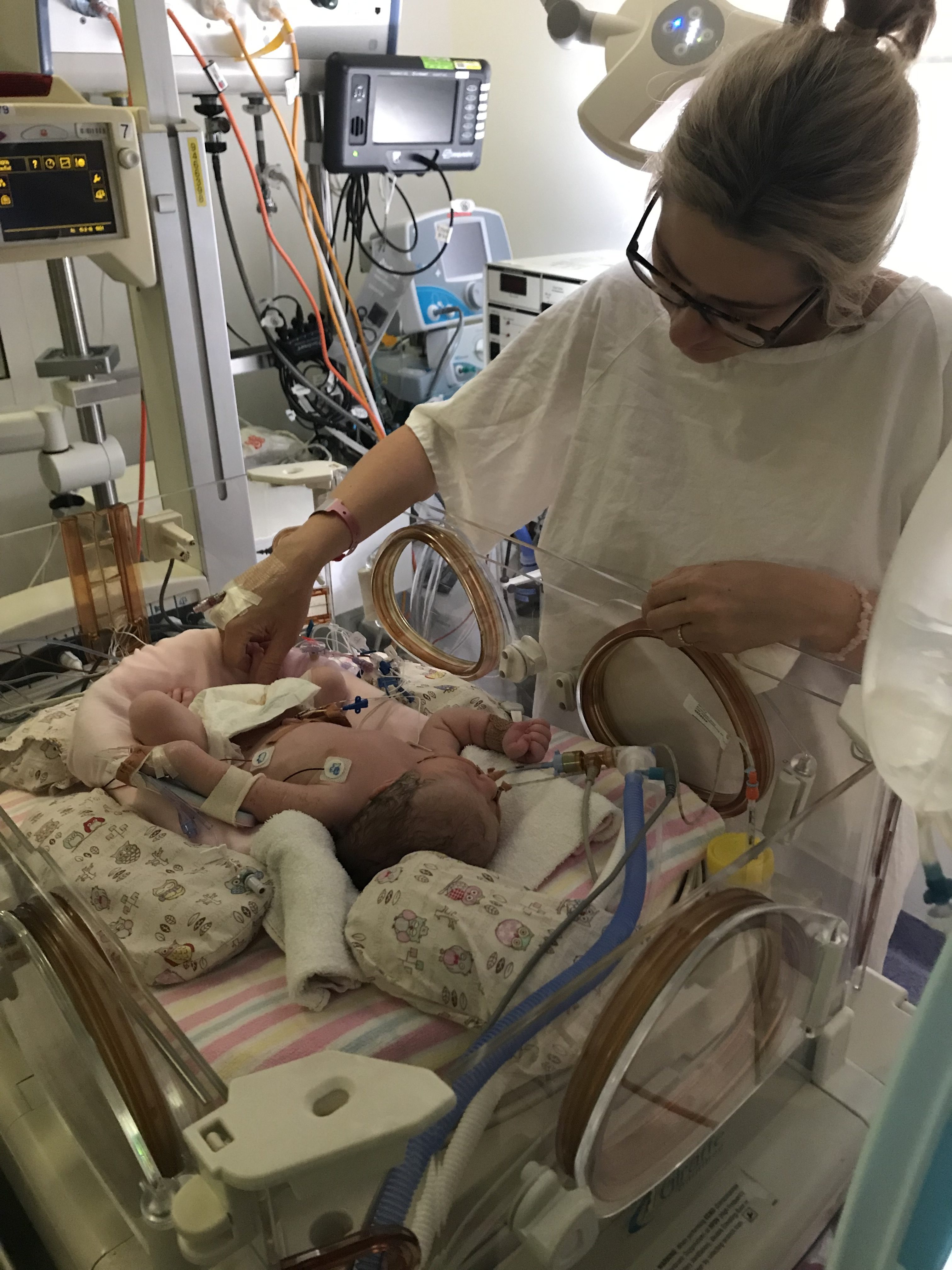 Did you always want to be a mother?

Yes, desperately. Ever since I was a little girl I wanted to be a mother more than anything in the world.

It was relatively easy. We were married three months after getting engaged and I knew I wanted to have a baby straight away. I had already had my eggs tested and was tracking my ovulation and then I fell pregnant the first month we tried.

We went for a standard morphology scan (done at 18-20 weeks) to check the baby’s growth. After an hour the sonographer went silent and then bought in a doctor. She told us that our baby’s heart was on the right and it looked as if she had a condition called CDH and that I would need to have an amniocentesis immediately to check for any chromosomal defects. The doctor explained all of my options depending on the severity of my baby’s condition, which would need to be confirmed by a specialist after an MRI. The whole thing ended up taking four hours. It was the worst day of my life and I was in complete shock. 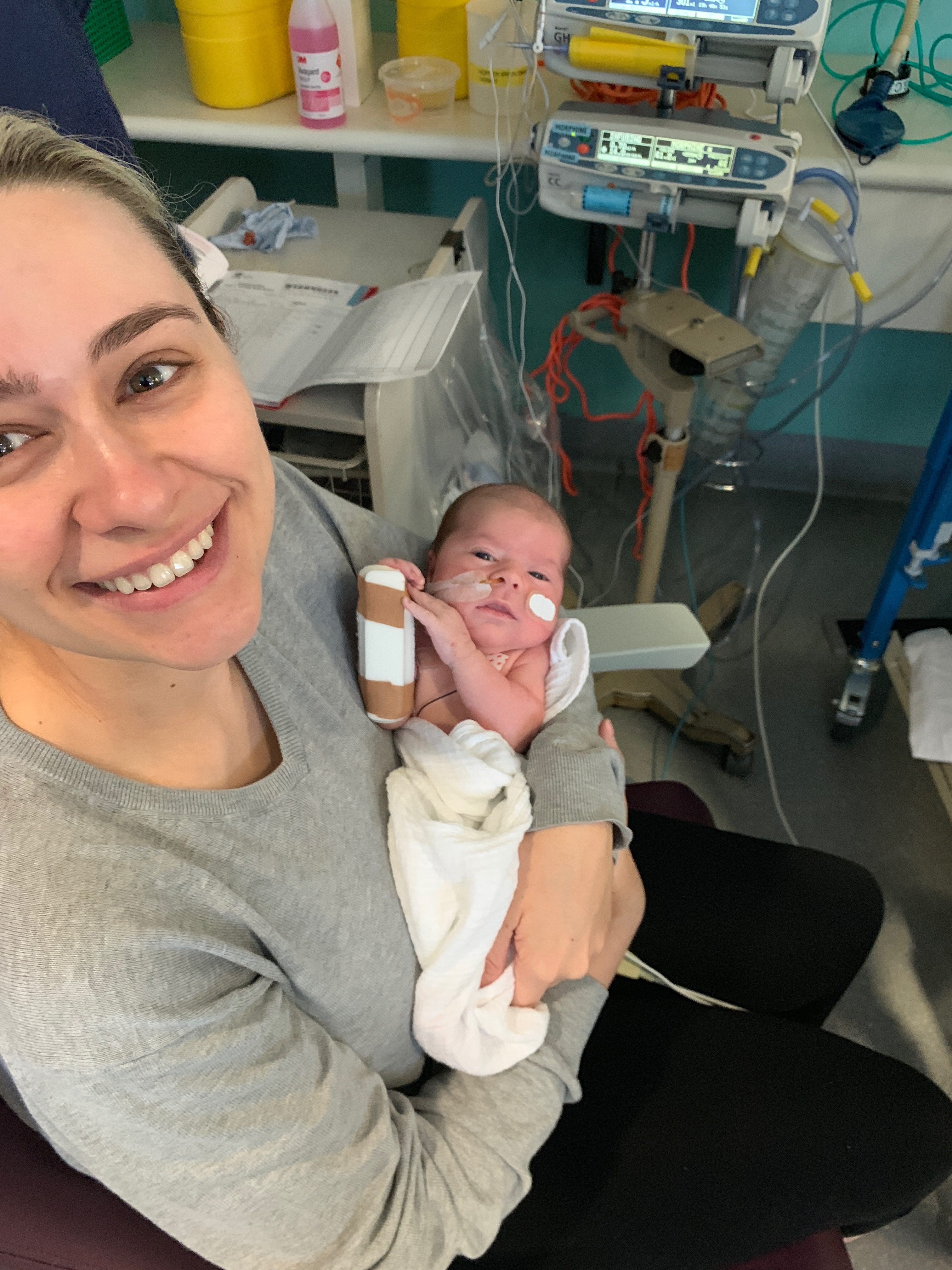 What is CDH? Can you tell us a little bit about the condition...

A congenital diaphragmatic hernia occurs when the diaphragm muscle— the muscle that separates the chest from the abdomen— fails to close during prenatal development, and the contents from the abdomen (stomach, intestines and/or liver) move into the chest through this hole, pushing the heart to the right and stopping the growth of the lungs. The main risk and what determines the severity of CDH is the lung growth (or lack of). CDH is as common as Cystic Fibrosis, affecting 1 in 2000 births, but relatively unknown. The mortality rate is 50%.

How did the rest of your pregnancy pan out?

The rest of my pregnancy was horrible. I had hideous morning sickness that everyone told me would end at 12 weeks (it didn’t!) and then at 18 weeks we found out about the CDH. So I went from feeling horrible physically (which got better at 22 weeks) to being an emotional wreck. I also had a condition called Polyhydramnios which is an excess of fluid in the amniotic sac. Darcy’s intestines and spleen were in her chest so her lungs were squashed and couldn’t process the amniotic fluid properly. My stomach was so tight it felt like my skin would split open- when my water broke it was like something out of a movie!

How did you manage the anxiety?

Not very well to be honest. I see-sawed between blinding rage that this was happening to me and complete devastation. One day I would be furious at anyone who was pregnant or had a healthy baby and the next day I was so sad I couldn’t even get out of bed. I just kept thinking ‘why me?’. I had already been following a lot of mums on Instagram and so many people I knew were having babies at the same time and I made it worse for myself by comparing my situation with theirs. Theodore Roosevelt said ‘comparison is the thief of joy’ and in hindsight nothing was truer for me. My husband said to me early on, “we have each other and whatever happens it will be ok”, and although I didn’t believe things would be ok at the time, just having his reassurance and that person who was there for me no matter what was such a comfort. I also posted about Darcy’s condition on Instagram and Facebook and I was floored by the number of kind messages and comments I received.

It was surprisingly wonderful and calm. I was due to be induced but my water broke two weeks early at 4am. As my pregnancy was high-risk we had already transferred to Westmead Hospital as soon as we found out about Darcy so when she was born she could be taken to Westmead Children’s. I was still induced even though my water had broken and I also had an epidural, so the whole day was very relaxed. Even though there were 10 people in the room, my mum and husband were there and I wasn’t scared and didn’t think about what would happen to Darcy when she was born. She came out crying which is a great sign for a CDH baby and was put on a ventilator straight away and taken to ICU with Luke. My mum stayed with me and I think I was in a bit of shock because I wasn’t scared or upset like I thought I would be.

Darcy went into surgery three days after birth. Can you talk us through what that was like?

We actually didn’t make it to the hospital to see Darcy before her surgery and looking back I think it was better as I was an emotional wreck. We live 45 minutes from Westmead and they moved her surgery three hours ahead so when we arrived she was just coming out. The surgeon told us everything had gone as well as could be expected- Darcy only had her intestines and spleen in her chest and although one of her lungs was tiny, the other looked strong. I burst into tears and cried tears of joy on and off the whole day.

What were some of the most challenging moments?

Sitting in a chair in NICU for 12 hours a day feeling so helpless. Looking at other people’s happy birth stories and feeling isolated and alone. Not being able to hold or comfort her when I could see how much pain she was in following her surgery. The week after her surgery was probably the hardest as she was struggling with her stomach and her whole body had blown up because of all the drugs and fluids being pumped into her- she didn’t even look like my baby; it was incredibly confronting. 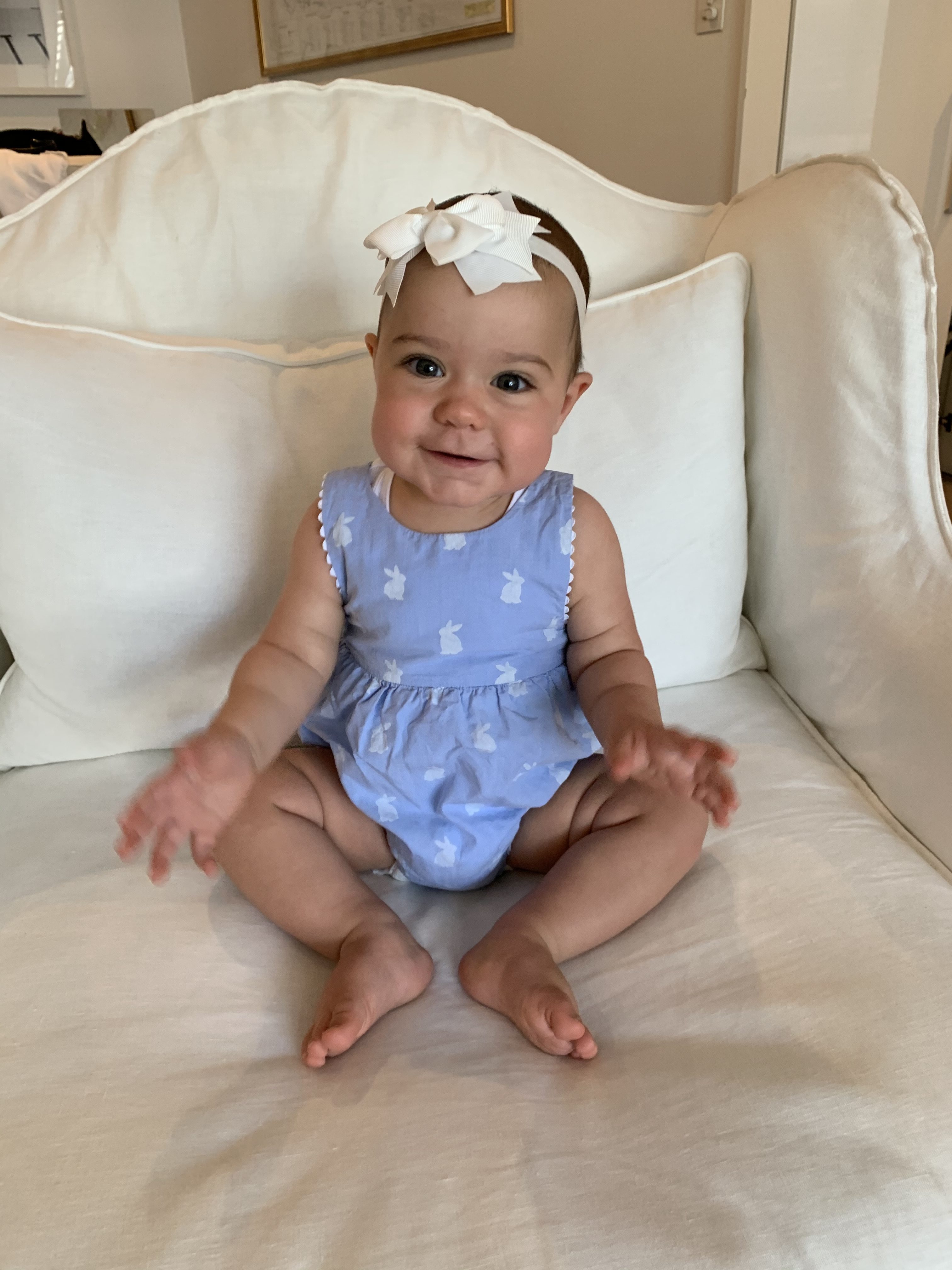 How is Darcy now?

Darcy’s recovery was incredible- she was breathing on her own within two weeks of surgery and we were home in three weeks when her expected stay was four to six weeks. The doctors called her a superstar and when we went back to visit the nurses at the Grace ward they couldn’t believe how big she was! When Darcy is 15 months old she will have an X-ray to check the growth of her lungs but since being discharged from hospital we’ve fortunately had no issues and she should have a healthy, normal childhood.

What does the future hold?

I am passionate about supporting Westmead Children’s Hospital, particularly the Grace Centre for Newborn Care following the wonderful care they gave Darcy. I recently joined the committee for the Grace Gala, a yearly event in which last year they raised over $800,000. Funds raised at the event go towards vital equipment to save sick newborn infants at Westmead and also support research projects with the Cerebral Palsy Alliance Research Foundation who work at the cutting edge of disability prevention. I hope that through my involvement in the committee I can give back in a small way.

How as this experience - or indeed motherhood alone - changed you?

Before having Darcy, I felt a sense of entitlement for what I deserved and what my life should look like and that just went out the window once we found out about the CDH and then Darcy’s surgery and recovery. Following the diagnosis, it was clear my pregnancy, birth and the first few weeks as a new mum were never going to be what I had imagined. As I said, it was very easy to think ‘why me?’, but now I think it’s more ‘why not me?’. I am a lot more relaxed than I used to be and know that things do not always go the way you want them to, but it can be ok.

What helped you to get through the more challenging moments?

The love of my family and friends. The doctors and nurses at Westmead Children’s hospital. Knowing I had to be strong for Darcy.

What advice would you give to parents who might receive the same diagnosis?

There is hope! It’s a horrible, scary diagnosis but there is a lot of support, most of which can be found when you’re in the trenches at NICU. While I dreaded Darcy being in intensive care, there was no better place for her to be and the level of care and support not only your baby, but you, receive there, it’s hard to put into words.

What type of mother do you aspire to be, and what lessons do you hope to impart on Darcy?

I absolutely love being a mother, it’s the greatest joy of my life. I hope I am a fair, loving and interesting mother! I hope that the joy I feel with Darcy passes on to her and that she is compassionate, kind, curious and headstrong.

How do you make time for yourself and what does self-care look like for you?

I am fortunate that I have a large support network and I am able to have some time for myself so I might have a (very occasional!) facial or go out for lunch and dinner with friends. Being back at work three days a week gives me time to have some non-baby thoughts! I also started a book club this year with a group of interesting and intelligent women and so far it’s off to a great start!