Lizi Simms’ daughter Leni is only 10 months old, but Lizi already has a plan for her 21st birthday party. She’s going to show the guests a video of Leni’s conception.

Don’t panic – Leni was conceived via IVF, using Genea Fertility’s revolutionary Geri incubator. It’s an Australian invented and produced medical tool, that takes photos of an embryo’s development every 5 minutes, creating a time-lapse video of the embryo’s development for the first 6 days for patients and scientists to review. Aside from the sentimental factor – it’s both staggering and magical to witness – the Geri incubator is an incredible advance for IVF technology. “The images allow us to leave the embryo undisturbed in the ideal environment, as we no longer need to remove the embryo from the incubator to review its development under the microscope, exposing it to less desirable conditions such as variations in temperature” said Genea Scientific Director, Mr. Steven McArthur.

And the results speak for themselves. “The Geri incubator, combined with an updated version of the fluid embryos develop in, has resulted in a staggering 12.2% increase in the number of live births for those struggling to conceive”, says Dr Cheryl Phua, Genea Fertility specialist. “The cutting-edge technology is the closest yet to emulating what occurs in the mother’s womb, allowing embryos to grow undisturbed, mirroring the journey in the mother’s fallopian tubes prior to implantation.” 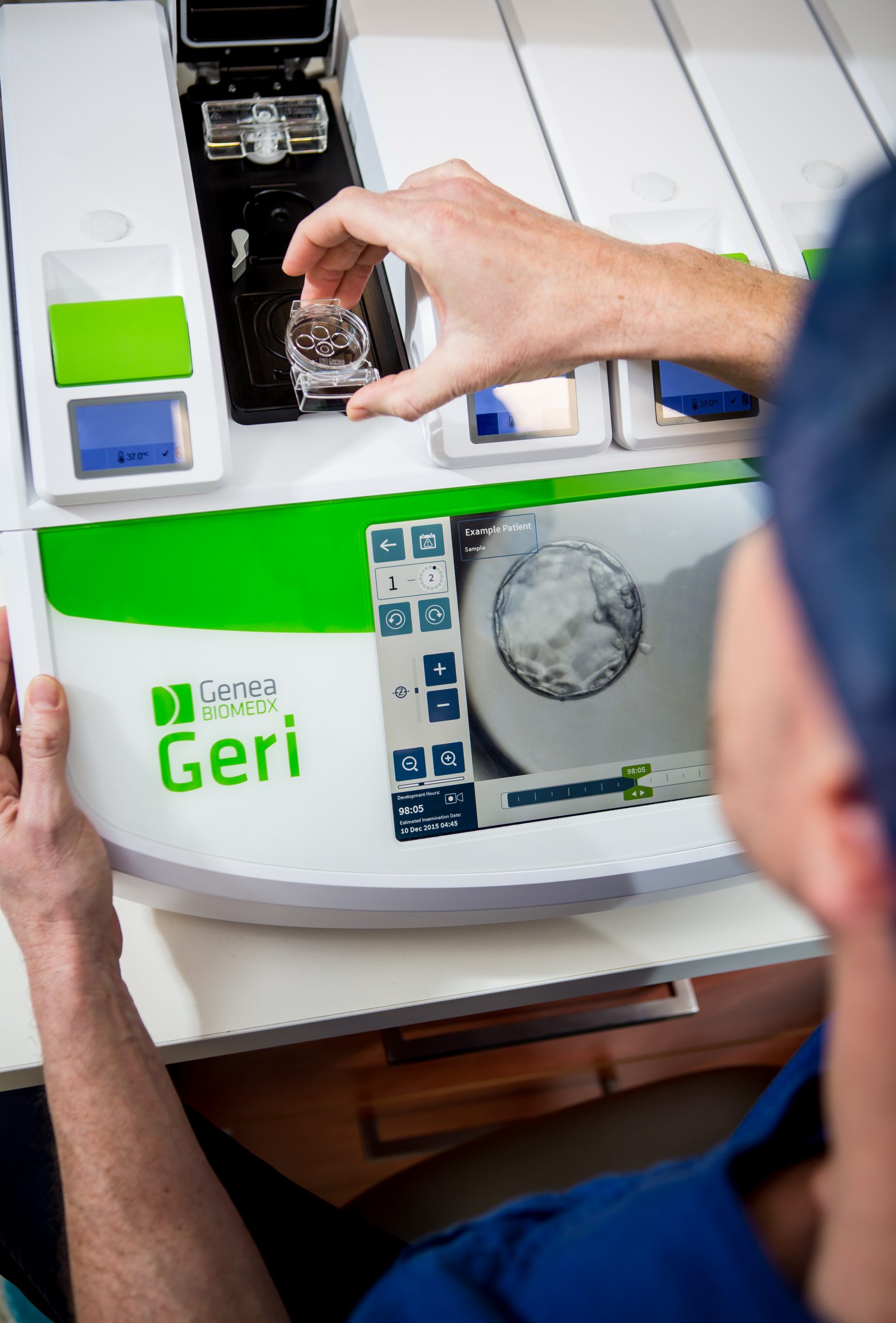 And as she explains, “that’s an increase in babies in arms, not just an increase in embryos or pregnancies”. Meaning ultimately, the Geri incubator is allowing more parents to fulfil their dream of parenthood.

For Lizi Simms, the road to parenthood wasn’t simple. “When I was 35 I had a routine appointment with my GP who asked if I had considered a family one day. I always knew I wanted kids, but I hadn’t met anyone. My GP suggested I consider egg freezing, to provide me with some options in the future. Even the egg freezing process was taboo – I didn’t have any girlfriends who had frozen their eggs. I felt really alone during the process.

In 2015, I attended Genea Horizon and had three eggs frozen.

Two years later, I met Geoff, and we knew we wanted to have a family together. We were so happy. In 2019, we fell pregnant immediately. But sadly we endured a year of heartache. The first miscarriage was the hardest. At the 12 week scan there was no heartbeat, and we were devastated.”

By their third loss, Lizi and Geoff reached out to Dr Cheryl Phua at Genea.

“The eggs I froze five years earlier were warmed and fertilised with Geoff’s sperm”, Lizi says. “I also commenced a stimulated cycle, eggs were collected and fertilised, and all were placed in the Geri incubator together for development in the laboratory.

At the end of the process we had two perfect looking embryos, one from the eggs I had frozen in 2015, the other from the stimulated cycle.

The frozen egg embryo was transferred and on the 10th of August 2020, Leni Marie Smith was born into the arms of two very grateful parents.”

Lizi has the timelapse footage of Leni’s conception, and can watch the incredible process of her daughter’s life beginning, thanks to Genea’s technology. “It’s amazing to think my egg was frozen five years before I met Geoff”, she says, “and yet, here she is.”

And, Lizi says, the footage means a lot to her – for more reasons than you might imagine. “You miss out on a lot when you need to go through fertility treatment”, she explains. “The joy of natural conception is taken away from you, so it’s really special to have something that we wouldn’t have otherwise. I felt very emotional when I first saw Leni developing in the incubator, a life changing, beautiful moment when Geoff and I combined to form such a beautiful girl, and I’m so grateful to Genea and the science we have to support couples like us.

If it hadn’t been for the incredible technology, I wouldn’t have a baby in my arms today. I am so grateful to the doctors, nurses and embryologists – it’s mind boggling the impact science has.”

Ten months in, Lizi is “loving motherhood, it’s all that I ever wanted and more. I was so ready for Len, I feel very balanced and overwhelmingly grateful.”