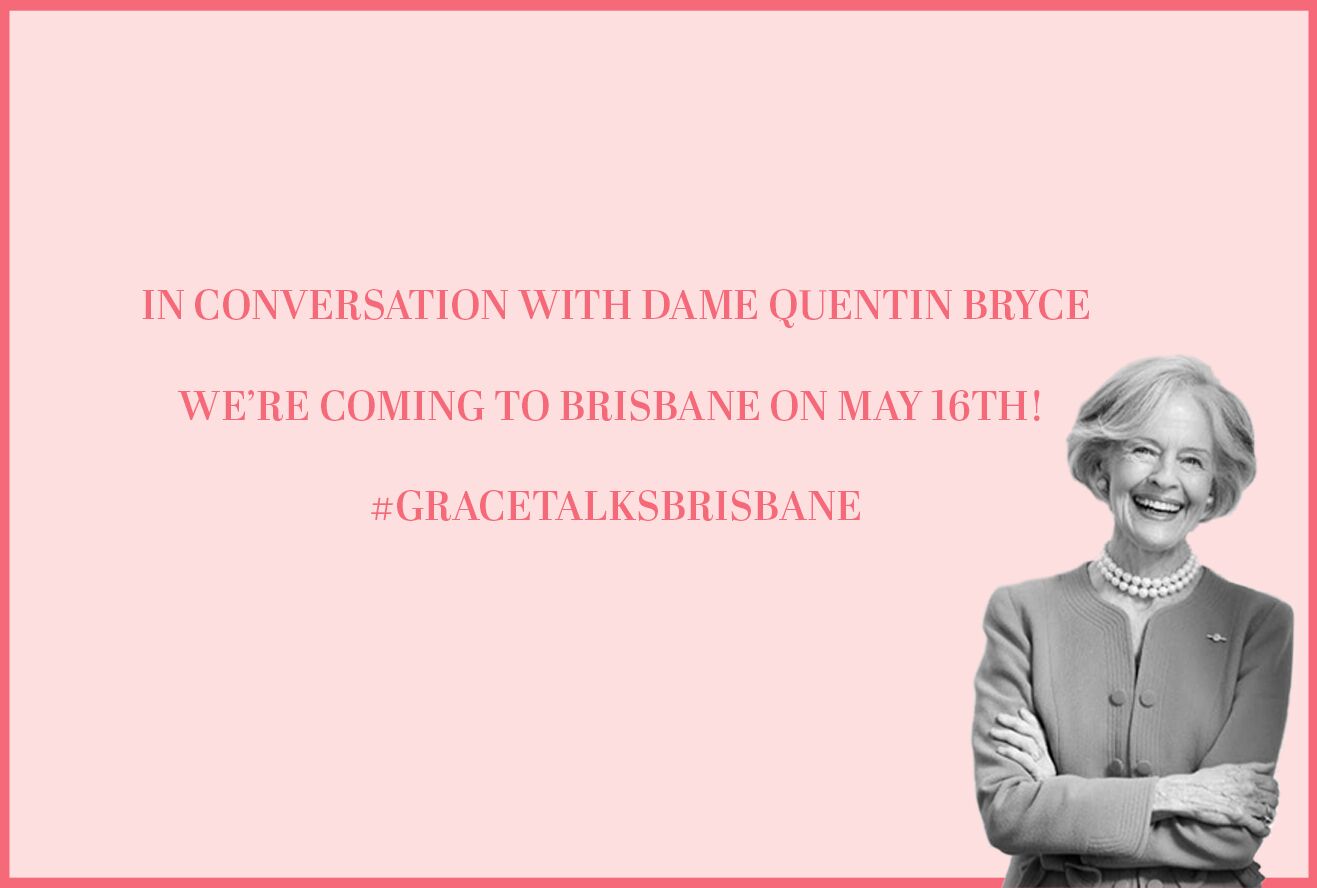 “You can have it all but not all at the same time” - Dame Quentin Bryce.

Ever since I became a mother, I often go back to the words of our former Governor-General, the Honourable Dame Quentin Bryce. I strongly believe we can achieve anything we set our mind to, but we can’t do it all at once. Something has to give. And what’s the rush? I’m guilty of not valuing my role as a mother as highly as I should. Of giving myself a hard time if I haven’t finished my to-do list at the end of the week. But life is too precious – we all need to give ourselves a break. And we all need to be kind of ourselves. We launched our first GRACE TALKS event in July last year. It sold out. The next event sold out too. These events reminded us of how important it is to connect with other mothers. To share stories with other mothers. And to surround yourself with real, honest women who aren’t afraid to admit that while motherhood is the best thing that will ever happen to you, it’s also really, really hard at times. We laughed. We cried. And we connected. So we’re doing it all over again, but this time we’re coming to Brisbane to meet our loyal Queensland readers! When? May 16th at 10am. Where? Victoria Park (you’ll find us in the Garden Marquee). Who? Well you’ve probably guessed given the above quote. I’m thrilled to be interviewing the extraordinary Dame Quentin Bryce – one of the most admired mentors for Australian women – at our next GRACE TALKS. She’ll be sharing her words of wisdom with us on everything from motherhood (she’s a mother of five!) to career and so much more. As a mother and grandmother, Dame Quentin Bryce is a role model and mentor to women at every stage of their lives. She was Australia’s first female Governor-General, holding office from September 2008 until March 2014, and values and encourages women’s capacity to form strong and enduring bonds of friendship, intellectual and emotional enrichment, and mutual support in their roles within the family, workplace and community. Quentin Bryce was Australia’s twenty-fifth Governor-General. As the first woman to take up the office, she remains a pioneer in contemporary Australian society, and yet one who brings more than forty years of experience in reform, community building and leadership to the role. Quentin Bryce and her husband, Michael have two daughters and three sons. Children have always been the focus of her life: “Whatever else I might have been doing, children, not just my own children but all children, have been at the centre.” And she’s passionate about mothers connecting with other mothers: “Through our mothering, it’s the friendships and connections we make, when we’re really depending on each other. We all have ups and downs, worries and anxieties, and all mothers need to be reassured and encouraged.” Bring your mother – this is a great Mother’s Day present – or grab a girlfriend for a fun morning out with like-minded mothers. Brunch will be served and there’s a fantastic goodie bag to take away (let’s just say you won’t be needed new beauty products anytime soon). You’ll also get to meet our friends at Little Kisses who have been creating beautiful baby hampers, clothes and toys for style-savvy mums since 2001 (hint: Prince George received one). Tickets are selling fast so hit the link below and get yours now before they sell out. There are also discounts for bigger groups. Tickets: Single: $109 Double: $185 Group of five: $400 We can’t wait to meet you! Georgie x GET YOUR TICKETS HERE