Dancing With Fire: Yolande Brown On Identity, Racism and Motherhood 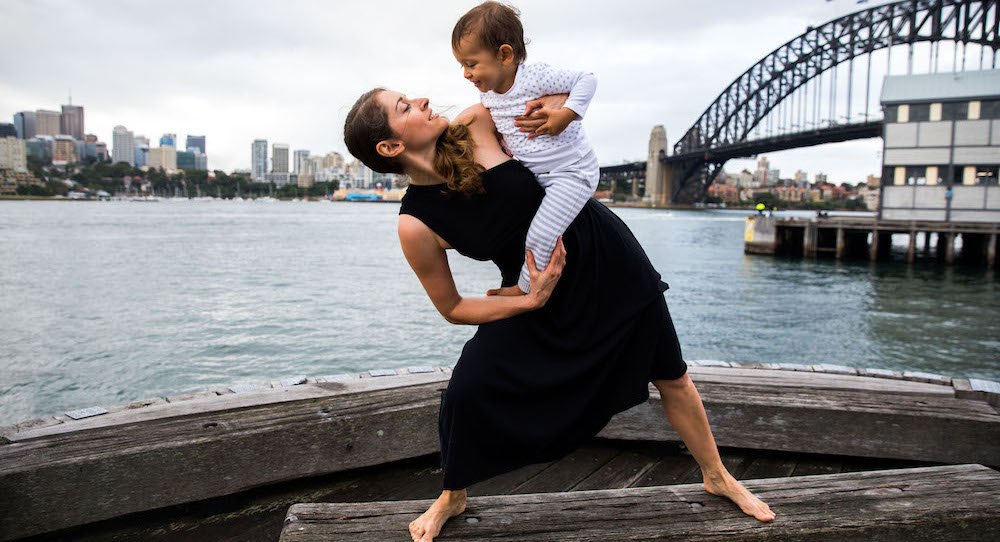 Yolande Brown danced with Bangarra, Australia’s flagship Aboriginal and Torres Strait Islander dance company, from 1999-2015. In an industry where most dancers reach retirement age before they hit their thirties, a 16 year stint on stage is extraordinary.

Then again, there is nothing ordinary about Yolande Brown.

I first met Yolande over ten years ago. I was in my final year of a dance degree at the university where Yolande had trained, and she was invited to return as a guest choreographer.

Bangarra translates from the Wiradjuri word meaning ‘to make fire’, which explains a lot about why Yolande felt so at home there.

There was a rigour to her rehearsal process that was like nothing I’d ever encountered. Her work ethic, and care for the material, was a force. During rehearsals in a particularly gruelling week, I remember simply sitting down in the middle of the studio floor – akin to lying down under your desk and taking a nap. No prizes for guessing why my performance career fell a touch short of the 16 year mark.

It’s no surprise, then, that it took the seismic shift that is motherhood to signal Yolande’s transition from on-stage to off. The birth of her son Xavier, in 2015, saw Yolande focus on choreography and on the creation of Bangarra’s newest platform, Knowledge Ground.

In motherhood, still, Yolande approaches her role with the same deep thoughtfulness and integrity as she did her performing roles – which is how she found herself running a cultural dance workshop at her son’s daycare (suddenly book week doesn’t seem quite as much effort as it felt).

Yolande spoke to us about her experience grappling with her identity as a fair-skinned Aboriginal woman, and how culture and parenting collide for her today.

Working with Bangarra you're obviously very connected to culture. Has your Indigenous heritage always been a big part of your life? Did your parents have a big influence on how you connected with your culture?

From as young as I can recall, I remember my grandparents telling me I have Aboriginal blood running through my veins. I was drawn to this – it was something I have always been proud of, though as a young person I was conflicted by what it meant for me. Being fair skinned, I felt that I wouldn’t be accepted as being Aboriginal by First Nations people nor other Australians, so I kind of kept this to myself.

I often encountered people being openly racist against Aboriginal people in front of me – I felt I had no voice to stand up against this as a youngster but I still felt saddened and angry. I remember the courage it took me to tell a fellow Aboriginal classmate that I was Aboriginal too. This was when I was in grade 2. I was worried he’d say ‘no you’re not’, but he looked at me and went ‘ah, yeah … cool!’. That made my day! I also recall when I was in grade 4 getting my mum to write a note to my teacher excusing me from religious instruction. I’d been highly offended when the teacher had stated that the missionaries worked hard to civilise the savages, pointing to a book with stereotypical images of traditional people in their lap laps.

I also felt a sad lacking that I had no connection to my mob and my traditional culture. My grandmother left her homelands near Augathella – Bidjara land – when she was 16 years old. She didn’t like talking about her Aboriginality. I guess she’d had shame drummed into her from a young age. Our family was also fractured by some who vehemently denied being Aboriginal – family who were racist and looked down on blackfullas.

Now I understand all this is a common story for many. I am proud that through my creative practice I am able to contribute to a shift in attitudes through generating understanding and also learn more about our deep and wonderful Australian First Nations cultures. 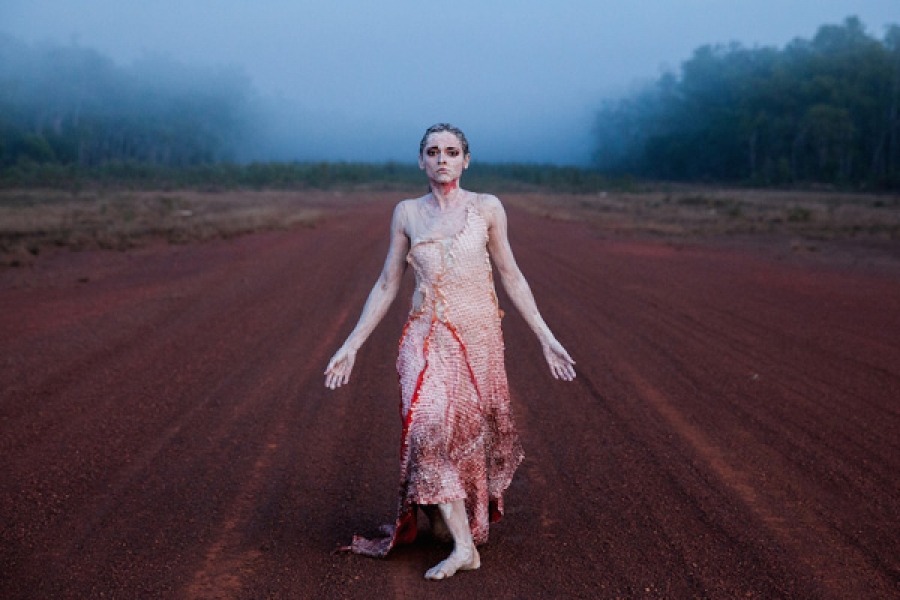 Your son was born in 2015. Did you talk to him about his Aboriginality from a young age? How do you engage him with his culture?

My son, Xavier, is super proud of his Aboriginal heritage. Xavier is yet to step foot on his Bidjara Country but his second name, Warrego, speaks of my Grandma’s story – how she’d ride her horse to school and on the way she’d cross the Warrego river by hopping off her horse and swimming the full river’s breadth, holding onto her horse’s tail.

Also, we have been adopted into a Yolngu family (North East Arnhem Land), part of the Wanguri clan. Xavier is extremely proud of the Yolngu name he has been given: Gurramindi. Gurramindi means ‘wind’; a particular kind of wind that comes in a certain season, when the Brolga swamp areas dry out and the crocodiles retreat. The Brolgas feel safe to do their courtship dancing and the little willy willy Gurramindi lifts them up into the air as they dance.

One day, Xavier came home from day care telling me adamantly “my name is not Gurramindi”. I was taken aback by this and wondered what had happened and how I could make him feel proud of his name again. I shared a dance and cultural workshop at his centre, revolving around the Gurramindi story. The children painted up in ochre, learned about the coolamun and the clapsticks and I brought in a dance prop – a huge sheet of blue, stretchy lycra with holes cut into it – so the children could use it as the rising and falling swamp waters and take turns as crocodiles snapping out from the water. As the fabric settled down, the children became the Brolgas and the Gurramindi breeze. And through sharing this story, Xavier went back to being super proud of his name!

Do you worry about Xavier seeing or hearing negative stereotypes? Has this ever happened and if so how do you deal with it?

Of course I’d like to shield my son from these bad experiences. He doesn’t yet understand the difference between skin colours and I don’t want to point this difference out as I feel it’s not something that should be significant in life. When he asks me about this we’ll have the conversation and I’m sure that day will come. I will certainly try my hardest to instill a pride and a confidence within him so he knows and is proud of who he is – all his heritage – and to hopefully have the ability and stamina to rise above this kind of negative conditioning.

What’s been your experience of daycare and the way they incorporate education around First Nations culture and practices into activities?

Within Bangarra I help to facilitate and deliver a course for teachers called Winhanga’rra. I have spent time working with teachers (primary and secondary) and gaining an understanding of the challenges they have and the gaps in knowledge when it comes to engaging with First Nations cultural content and understandings. There is a lot of room for improvement across the board and I understand that this is due to the recent post-colonial history of this country. Educators are doing their best with what information they have been given, however there is so much more to learn.

Once teachers start this journey it can be truly inspiring for them. I often think the best place to begin is by starting where your feet are planted – engaging with Elders and Indigenous people within your community – and making sure that the parents of your Indigenous children are not the sole First Nations resource for your centre. I want my son to be able to learn from local elders through incursions – not just through me and my connections. Yes, this requires some funding as knowledge keepers should be paid for their contribution – but the results can be and are amazing!

When you think about your son's future, what do you worry about? What are you excited about?

I am truly concerned by the current state of our natural environment. It has taken the blink of an eye – just over 200 years – to bring catastrophic changes to our precious country’s health. Our river systems are dying. Ecocide is permitted as mining companies are granted water rights over and above the rights of nature and the rights of people living on Country. River ecosystems that have never run dry are now almost dead. Billabongs are parched, springs are running dry. And this is a breeding ground for fire – along with the neglect of caring for country through traditional cool burning practices. We are a mirror to the earth and if our greed as a civilisation stands paramount to the earth that sustains us, I am truly concerned about our children’s future.

I am, however, constantly inspired by the resilience of nature and humanity and the ability to innovate through creativity. I firmly believe we need to rethink how we live, rethink the importance of the GDP and perhaps examine the GDH (Gross Domestic Happiness) and allow human ingenuity and spirit to create a new pathway forward. One that heeds the wisdom of millenia, working in reciprocation with nature and fellow beings. 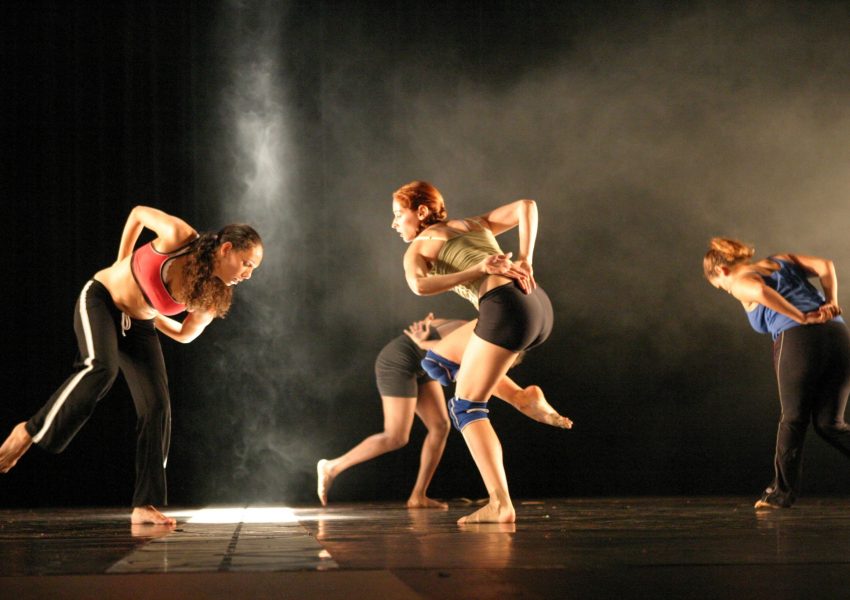 What does Australia Day represent for you?

It represents a day that should be a day of celebration for all but, sadly, how can this be the case when Terra Nullius is the legal fiction underpinning this country’s constitution. There is a lot of work to be done and until we get there, I will be drawn to contemplating the last 200 years of the neglect – neglect of nature, of Country and neglect of this country’s First Peoples, the wheels for which were set spinning on January 26th 1788.

You're now working as Bangarra's Knowledge Ground Coordinator - can you tell us a bit about the role and what it entails?

Knowledge Ground is a great place for anyone, anywhere to freely engage with the history of Bangarra Dance Theatre, Australia’s premiere Indigenous Dance Company. Through dancing your fingertips across a device, you can explore the company’s 30 year history and learn more about the productions, the people, the places and the journeys and also our incredibly rich First Nations history.

Having danced as a senior dance artist with the company for 16 years, I returned from maternity leave and was offered the opportunity to coordinate this site. There were a few stepping stones to developing the site which I helped coordinate and I have since worked part time over the last 2 years carefully and respectfully curate the platform – digging through archives, entering standard content, interviewing people, producing interesting articles … and where we’re at now is only the beginning. I have many more exciting ideas to work into the site! Please feel free to hop online and choose your own adventure through Knowledge Ground.