Here we go, my very first editor’s letter for The Grace Tales. I meant to start writing editor’s letters, oh, about two years ago. Around the same time I told myself to start exercising and stop eating Magnums. But like a lot of things in my life, it got pushed to the bottom of the pile while Magnums stayed at the top...

I’ve had nappies to change. Books to read. Sleep to catch up on (still working on that one). Nightly negotiations with toddlers over broccoli. And a lot of content to write. But I’ve decided it’s finally time to say hello. I want to get to know my readers a little better, connect with all the mamas that read The Grace Tales and thank you for your support. For visiting The Grace Tales as much as you do, because without you, it simply wouldn’t exist. Leaving my career in magazines behind was a big move for me. I’d spent over a decade working in fashion magazines, finally landing my dream job at VOGUE magazine where I eventually became the deputy editor. Who leaves their dream job at VOGUE? Me. It was a big call. But it was the right one. I launched the site while I was still at VOGUE and developed a loyal following. Over the months, I had a feeling that I might be able to make a modest income from doing it full time, so I took the plunge. After my second daughter arrived, I made the decision. I couldn’t do both jobs well, so I quit the VOGUE job and became a digital publisher. I live by the former Governor-General of Australia Quentin Bryce’s words: “You can have it all, but not all at the same time”. I hear you, Quentin. To change your career is daunting, especially one which you’ve worked so hard on. But it was either see my kids for a couple of hours a day, or throw my career in a totally new direction. I chose the latter. Life is precious and I want to see my girls grow up. I missed Arabella walking for the first time. Our nanny texted me to tell me. Thanks for letting me know, #devastated. But I was there when Lottie first walked. Your career is important (as is earning an income!) but family is everything. So here’s where I’ve ended up. And so far, so good. There are still seemingly endless meltdowns, days when it all goes pear-shaped and those moments where I wish I had an IT department. Running your own business takes dedication and hours and hours of hard work. It’s not the easy option but it’s the one that works for me. It has been an incredible two years for The Grace Tales and things are only just getting started. Each week, I’ll be updating you on the week’s content, what’s coming up and giving you a little insight into my life as the editor/founder of The Grace Tales. I often get asked how I juggle everything. I give the same answer every time: it’s far easier now I’m running my own business. I often work late into the night (it’s 11pm as I write this) to make up for the time spent with the girls during the day. They both attending a pre-school three days a week and then we have a lovely au pair who helps me on the other two days. Usually, I try not to work on Fridays. Oh, and I wear my pyjamas during the day which saves time. It’s true. In this picture I’m wearing a Masini & Chern pyjama top so I only needed to add jeans and I was out the door this morning. Luckily, Masini & Chern make PJs so cool you can wear them all day. Genius. My three-year-old Arabella often comes on shoots with me (Lottie would destroy the lovely homes we photograph so she’s not quite ready to come along yet) and I have a gorgeous husband who cooks most nights (I’m better at cleaning than cooking so everyone’s happy with this arrangement). I am getting better at fitting in as much as I can when they are at pre-school then calling it a day until they’ve gone to bed. We’re all happier when I do this. What I wouldn’t give up while the girls are so young is the flexible working arrangement I’ve created. I still work as hard as I did in magazines, but I pick which hours I work. My own mother ran her own interior decorating business from home while we were growing up. I remember driving around with her visiting clients or dropping off fabric samples. We never went from A to B. There were always stops along the way for her work and I remember her working each night in her office. But more than anything, I remember her being present. She was there for us. Every afternoon she was at the school gate with afternoon tea ready. She was and is an exceptionally amazing mama – I feel very lucky for the love both my parents gave me growing up. 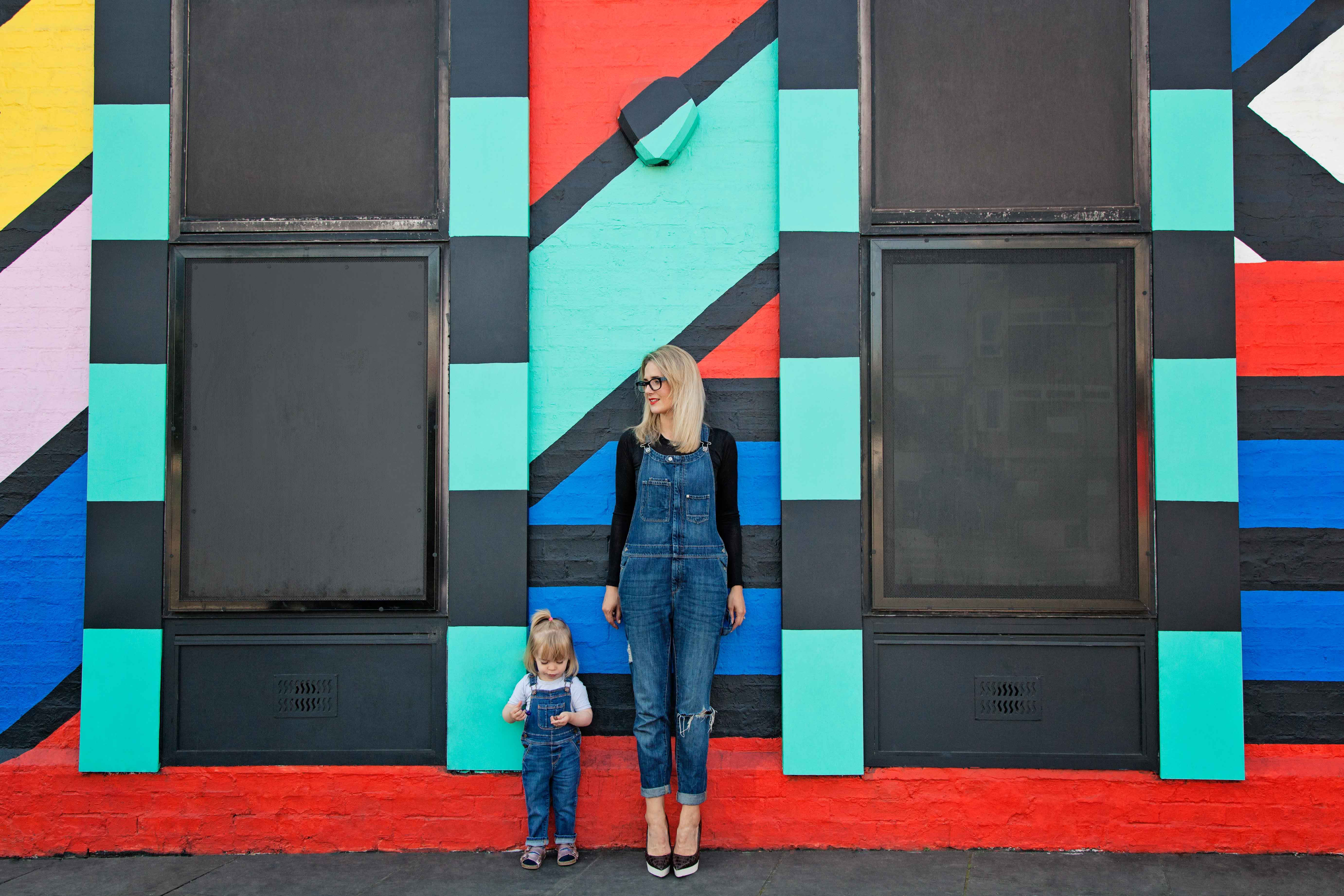 Anna Whitehouse from Mother Pukka with her daughter Mae

So, that’s enough rambling from me. Here’s all the exciting things happening this week. Have a read of our interview with London based Anna Whitehouse from Mother Pukka. She’s HILARIOUS. Anna and I became great friends when we were both living in Dubai many years ago. I adore her and not only because she’s bloody funny (and British – I love all British people). She’s recently left her copywriter job at L’Oreal behind to focus on her new business Mother Pukka and spend more time with her daughter Mae. She’s extremely passionate about flexible working: “Pushing it, shouting about it and asking big companies why they can’t see through all the red tape to let talented mamas and papas continue to do their jobs in a more flexible working environment. With the Internet and stuff, there’s no excuse. That’s why I launched our ‘flex appeal’ campaign to hammer home the message,” she says. Read her story here. I’m also in awe of mother of five (yes, FIVE), Celia Muñoz who is the founder of charming childrenswear label La Coqueta. Two years ago my second daughter arrived and for us, two is the magic number. We’re unable to have more children due to health complications, but honestly, I’m so content with two and not sure I could cope with anymore. I’ve reached my limit. So I think it’s incredible that Celia is not only raising five children, but has also created such a beautiful brand, #girlboss. Her home is beautiful (and neat, how can it be so tidy?!). We’re also wishing we had more wallpaper in our house after writing her profile. Beauty writer Sarah Brooks-Wilson also gives us the lowdown on pigmentation, and how to finally get rid of it (for real!). 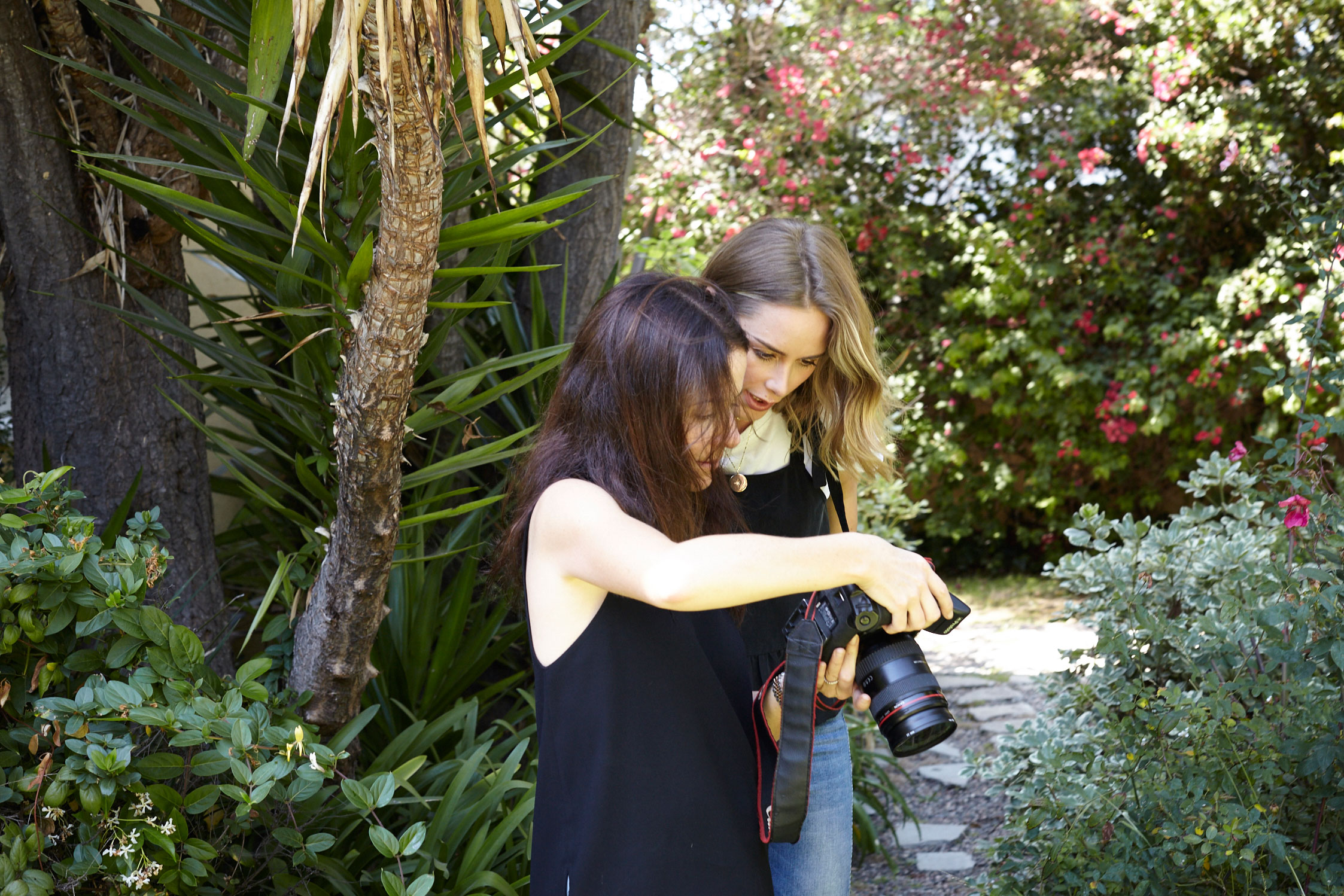 We’re also shooting new stories like crazy this week. In LA, photographer Julie Adams photographed Anine Bing, founder of her namesake fashion line, blogger, former model and singer for The Grace Tales. Meanwhile, in Sydney, photographer Grace Alyssa Kyo and I visited the spectacular, newly renovated Sydney home of Stephanie Conley, the mama of two behind stylish food website The Hostess, which focuses on home-style cooking and sharing with family and friends. 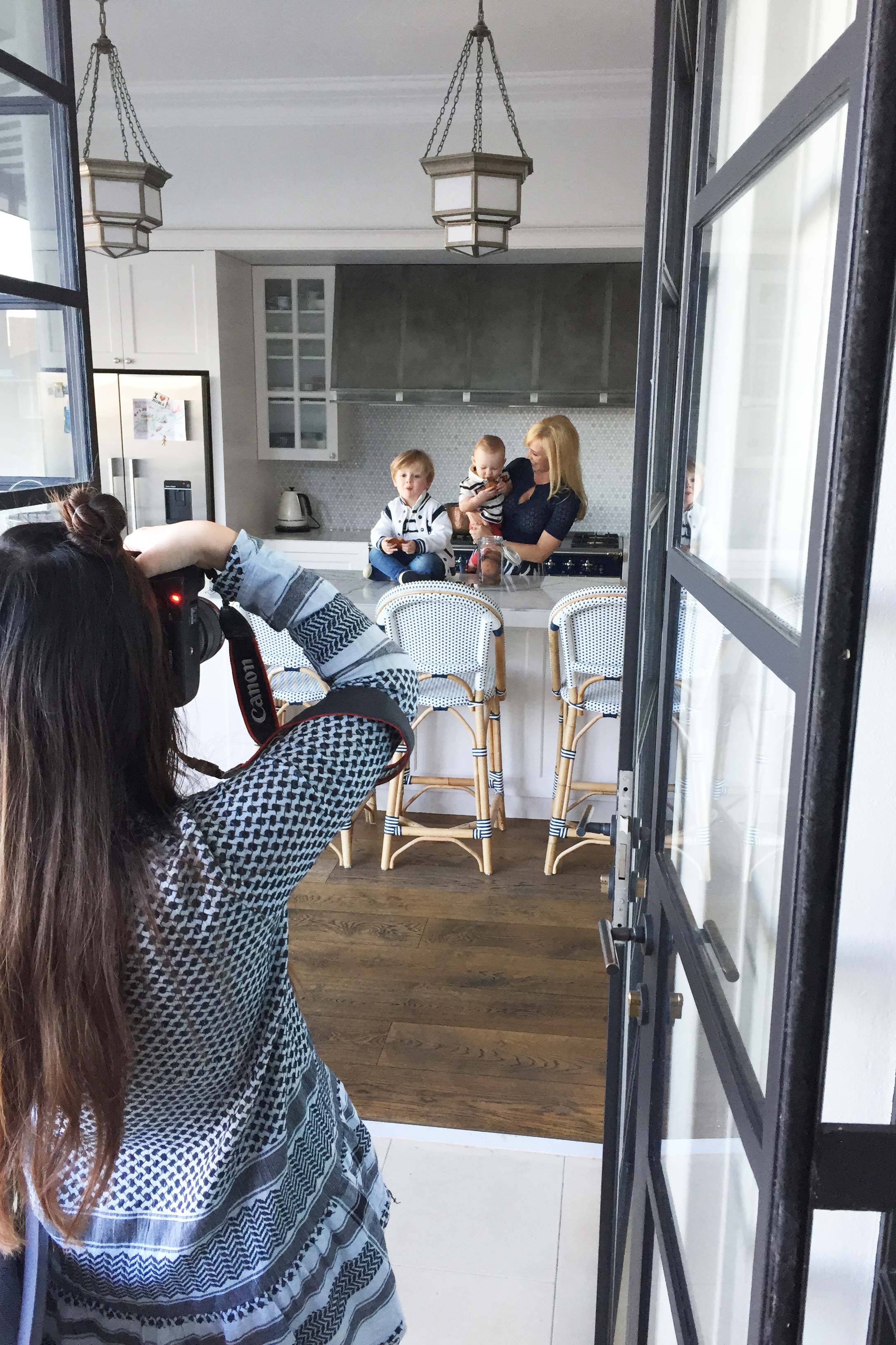 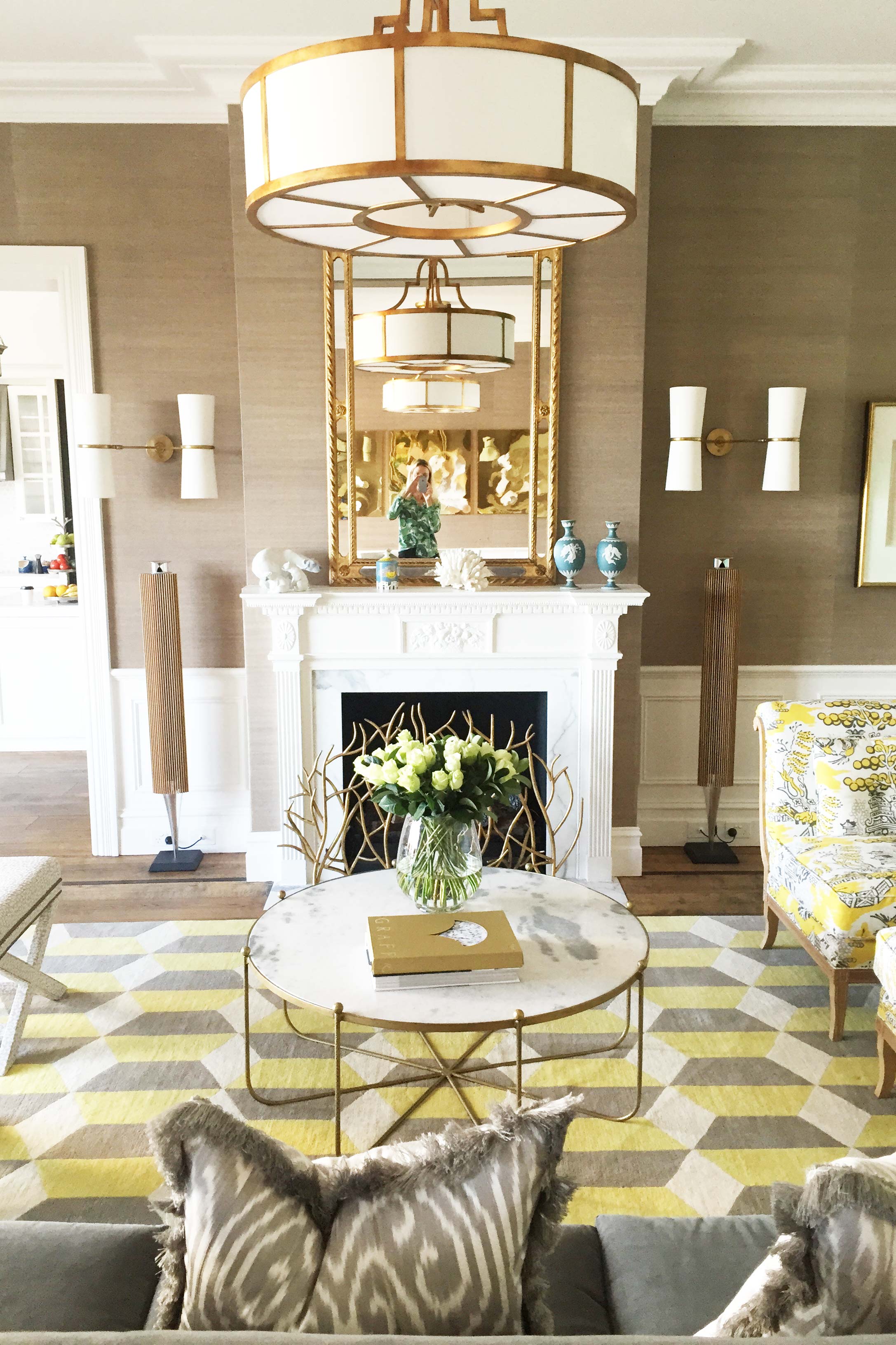 Photographer Grace Alyssa Kyo shooting The Hostess’s Stephanie Conley at home in Sydney with her sons.

I also got together with one of my dear friends Camille to do the ELLE Mystery Box Challenge and make a Pinky Promise to each other to support Pink Hope. Camille and I have known each other for about eight years and she kind of doubles as my career-coach, psychologist as well as a beautiful friend. As it turns out, during the challenge (see our video here) where we answered ‘mystery’ questions about each other, I discovered I don’t know when her first kiss was or what fragrance she wears, but what I do know is I’m always in fits of laughter when we speak (which is pretty much daily). I’d never survive this whole motherhood thing without my incredible friends who keep me sane. I also adore meeting so many wonderful women through The Grace Tales. We’re all in this together and I’m a big believer in women supporting women. You’ll get nowhere being nasty or unkind. Fact. 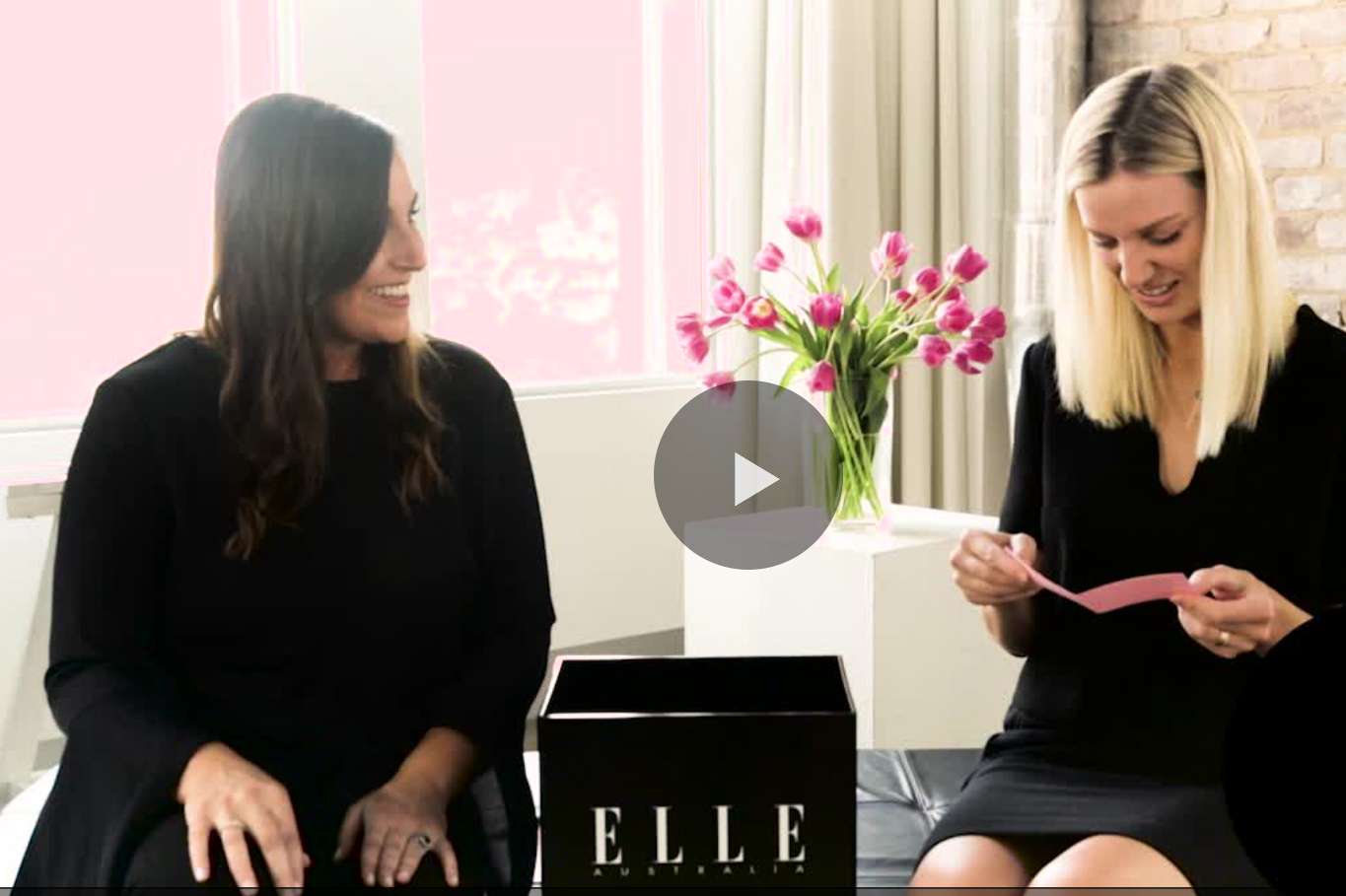 Ok, that’s enough from me. It’s nearly midnight and I need to get to sleep before one of the girls wakes up, ends up in our bed and kicks me in the face or throws a bottle at me. I’d love to hear your thoughts or suggestions for the site. Content you loved. Or want to see more of. Or less of. Or anything really. I just love hearing from you. Thank you for reading The Grace Tales, I’m so incredibly grateful. Georgie xx Holding image: Grace Alyssa Kyo

Love this! It’s great to get to know you a little better. I love The Grace Tales and look forward to sharing the working/motherhood/family life with you!

Thanks Michaela! We’re all in this motherhood thing together and I’m looking forward to getting to know my readers a little better too 🙂 xx

Absolutely LOVED this – and I’m not even a mother. So honestly written, loved, loved it.

Thanks so much Alisha 🙂 XX

LOVE THIS. Did nearly cry when you wrote about your mum being at the school gate. Hoping to do the same one day! x

You will darling xxxxx

I’m also a big fan of The Grace Tales despite not being a mother yet. Thank you for all the lovely content you create and the fantastic women you introduce us too (can’t wait to read Anine Bing).

Thank you so much Karen! Such lovely feedback. We’re so excited to have Anine Bing on the site too!! And lots of other great profiles coming up 🙂

I have only just got around to reading this but what a lovely post. I applaud your courage in giving up your ‘dream job’ to take a huge risk and am glad it has paid off. I too have taken the GG’s advice and resigned from my job after baby number 4. It is the best decision I have made. I wanted to be a present mother to my children and not regret spending the early years in a fog of drop offs and pick ups rushing to work and feeling in a whirlwind. I am taking time out from… Read more »