I can't recall a recent catch-up with friends that didn't involve some percentage of the conversation that revolved around our husbands.

Who was pulling their weight with housework? Who shared the load with childcare pick-ups and drop-offs? Who actually had an equitable share of ‘me-time’ as their husband? (The answer to that: no one.) The reality of modern life – particularly a life that involves children – is that marriage is a constantly evolving, particularly challenging institution. Between finances, raising children, managing careers and keeping the infamous spark alive … It’s a relationship that needs work. That’s why we were so pleased to interview Eli J. Finkel – a social psychology professor focuses on interpersonal attraction, marriage, conflict resolution, and how our social relationships influence our goal achievement. With a wife (and two children) as well as a new book – The All-Or-Nothing Marriage – Eli was well placed to answer some of our most pressing questions about marriage. From how to make time for each other post-children, to when we should be hearing the d-word alarm bells … Eli had insightful and thought-provoking responses that showed there are many more anthropological and cultural factors at play when it comes to marriage than we may have been led to believe. Visit Eli J. Finkel 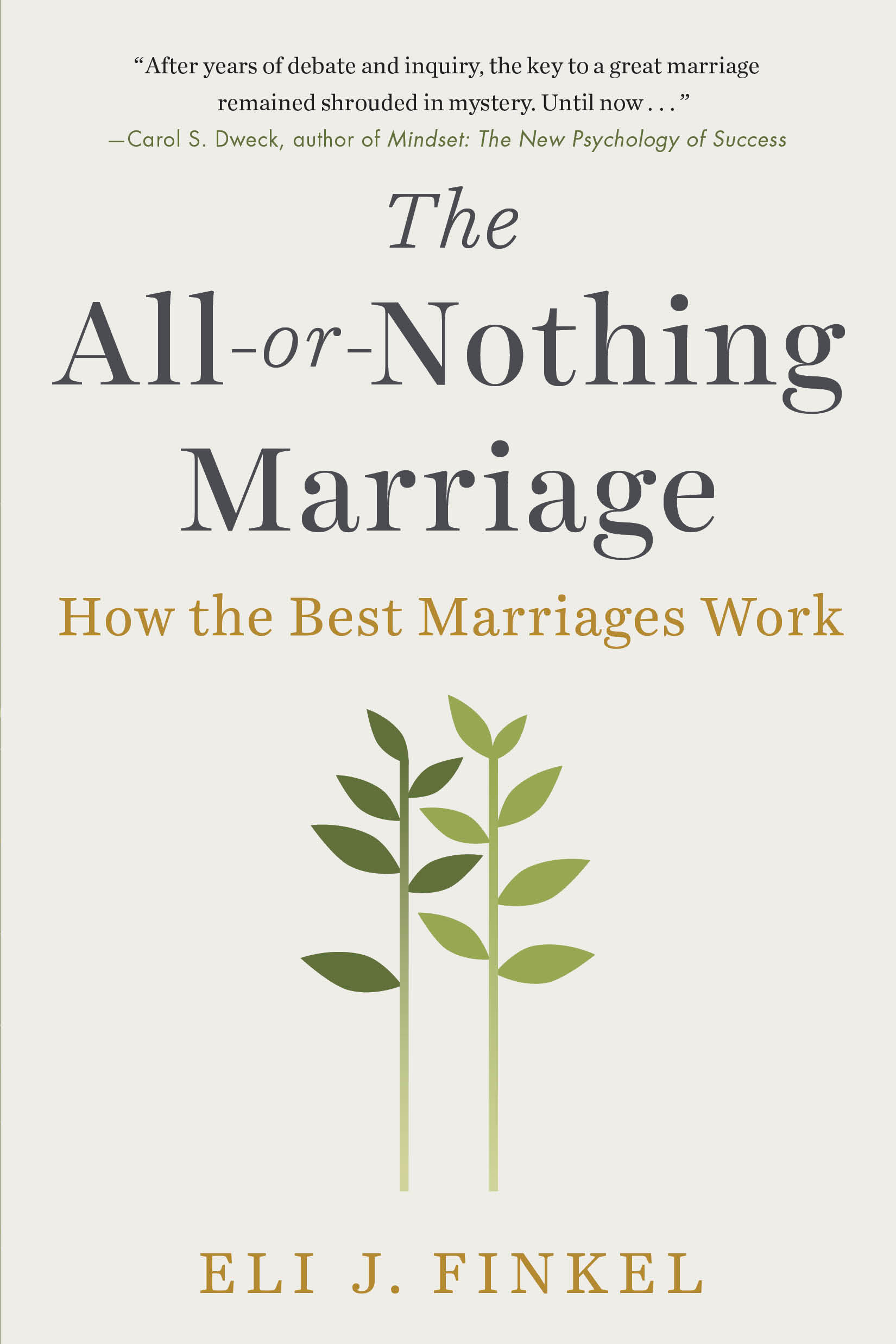 How has marriage shifted over the past few hundred years?

Since the colonial era, middle-class marriage has gone through three major eras. The first, which lasted from the 1600s until around 1850, was a pragmatic era in which life was precarious and spouses looked to each other for help with fulfilling basic survival needs—literally things like food, clothing, and shelter. The second, which lasted from 1850 until around 1965, was a loved-based era in which people began to view marriage as fundamentally oriented toward the emotional fulfilment of the spouses—with a particular emphasis on love. The third, which began in around 1965 and persists today, is a self-expressive era in which people continue to seek love, but love is no longer sufficient—we increasingly require that the marriage also help to fulfil our pursuit of personal growth and self-expression.

Over the past 70 years, the average age of marriage in the western world has shifted from early twenties to late twenties. What impact do you think this has had on marriages?

This tendency toward marrying at later ages is more of a consequence than a cause of changes in marriage. As we increasingly look to marriage to serve self-expressive functions, and as marriage has become increasingly optional as both men and women can support themselves as singles, marriage shifted from the first to the last stage of the transition to adulthood. These days, we like to establish ourselves as independent adults before we tie the knot, which is the primary reason why today’s Americans are much older on their (first) wedding day than their grandparents were.

We don’t need marriage today. Economic security, parenting … All of this can essentially be done without a partner. So what do you think draws us to making these life-long commitments?

Yeah, it’s surprising, right? The vast majority of people who aren’t religious—and therefore don’t view marriage as a sacrament before God—and who are financially secure get married. I doubt it’s for tax reasons. The truth is that Americans continue to value the institution of marriage—more so than western Europeans, for example—and believe that getting married is a key element of living a fully satisfying life.

These days, we’re spending much more time with our family units - particularly our children - rather than our broader network of friends and family. What impact does this have on our marriages?

Yes, it’s remarkable how much more time we spend engaged in active play with our children than our grandparents did with their children, a trend that’s especially strong among the highly educated. This trend has many benefits, but it also has costs, particularly because the intensive parenting time comes at the expense of time we could spend in other ways. As a marriage researcher, one concern I have is that this intensive parenting time comes at the expense of the cultivation of the marital relationship. And the fact is that sustaining a strong marital bond is one of the best things we can do for our children, which makes it important to recognize not only that our children need dedicated attention, but also that one of the kind things we can do for them is take enough time away from them to ensure that our marriage stays strong.

There are many ways to achieve a good marriage. Indeed, that’s one of the central lessons of my book. But the marriages that are flourishing the most are those in which the two spouses bring high expectations to the marriage and then invest enough in the relationship to ensure that the marriage actually meets those lofty expectations.

Do we expect too much from our husbands/wives?

I know this is a question that many people are asking today, but I believe that it’s the wrong question. The question is whether our expectations are appropriately calibrated in light of what the marriage can realistically provide. Assuming we’re compatible with our spouse, and that both of us are willing and able to invest a great deal in the marriage, then having high expectations can help to push us to have a profoundly fulfilling relationship. In contrast, if compatibility is lower, or if we lack the motivation or ability right now to invest heavily in the relationship, then we should try to lower our expectations. Ideally, we’ll calibrate our expectations upward and downward as circumstances require such shifts.

How do we know when our marriage is in trouble?

Unfortunately, there’s no hard and fast rule here. The only thing I would say is that it’s sad when an otherwise-strong relationship fails because the spouses lacked the skills or insight to endure and grow through the hard times and savour the good times. For many people, reading a good book on marriage — ideally one based on scientific findings rather than just intuition—will do the trick. For others, seeking out couples therapy will do the trick.

With the challenges that come with modern life and parenting, how do you suggest we cultivate time for our husband/wife in a meaningful way?

It depends what, in particular, we’re trying to cultivate. For example, if we’re trying to rekindle a sense of passion, one good option is to pursue novel, exciting activities together. Engaging in comfortable, relaxing activities can make us feel close to our partner, but they’re less likely to promote passion.

In your research, what characteristics have you found that make for a great marriage?

I wrote a whole book on this topic! But one idea that helps is to try to approach conflict from the perspective of a neutral person who wants the best for everybody. This straightforward perspective-taking task doesn’t require much work, but it makes us feel less distressed during conflict. More importantly, it helps us sustain higher levels of satisfaction over time.

Can you share 3 quick tips for maintaining (or indeed, creating) a strong marriage?

One is the neutral-perspective tip I mentioned in response to the previous question. A second is to try to adopt a key piece of Dan Savage advice for the bedroom—to try to be GGG (Good, Giving, and “Game”) to keep the sexual spark alive. And a third is to focus not only on ways we can deepen our connection to our spouse, but also on ways we can take pressure off the marriage in domains where we experience chronic frustration or disappointment. Again, they key idea is to calibrate our expectations to what the marriage can actually provide, doubling down on the strengths of the relationship and lowering expectations regarding the weaknesses.