Feeling Overwhelmed? You Need To Listen to Dr Libby Weaver on Episode 4 of The Grace Tales Podcast

I’m about to confess to something I’m not very proud of. When the announcement came last week that the first of the social distancing restrictions would begin to lift, my initial response was not relief. It wasn’t excitement, or anticipation, either. My immediate reaction was somewhere between anxiety, worry, and stress...

Yes, part of that was pretty understandable – were we ready? Would it really be ‘safe’? Was this going to send us packing straight into a second wave of coronavirus infections? But as my breath became a little shorter and a familiar feeling settled in my chest, I realised that what I was feeling had less to do with my concern for public health and more to do the feeling I’ve lived with ever since I first became a mother: overwhelm. While I long for the day when weekend brunches, cocktail catch ups, and communal celebrations are the norm again, ‘normal’ life also stresses me out. The constant planning and orchestration. The “I wrote it on the calendar 3 weeks ago!” arguments. The frantic washing of clothes at 10pm that you’ll need for 6am, the never ending packing and unpacking of lunchboxes, the 237 text messages it takes to coordinate one half hour coffee date with three friends on that one Saturday you’re all free in 6 weeks time. Yes, these are luxuries – small ‘problems’ to have in a world where people are losing their jobs, their livelihoods, and even their lives. But it’s made me realise that I have been living in a state of relentless overwhelm for years. So listening to this week’s podcast episode, featuring Dr Libby Weaver, set off so many lightbulbs in my head I could have been mistaken for a Christmas tree. Dr Libby is an expert on all things health and wellness, in both the physical and mental sense. She’s a nutritional biochemist, author, and speaker, and her latest book The Invisible Load – a guide to overcoming stress and overwhelm – tackles exactly why and how so many of us wind up feeling like this. More importantly, she gives us the tools to stop it. 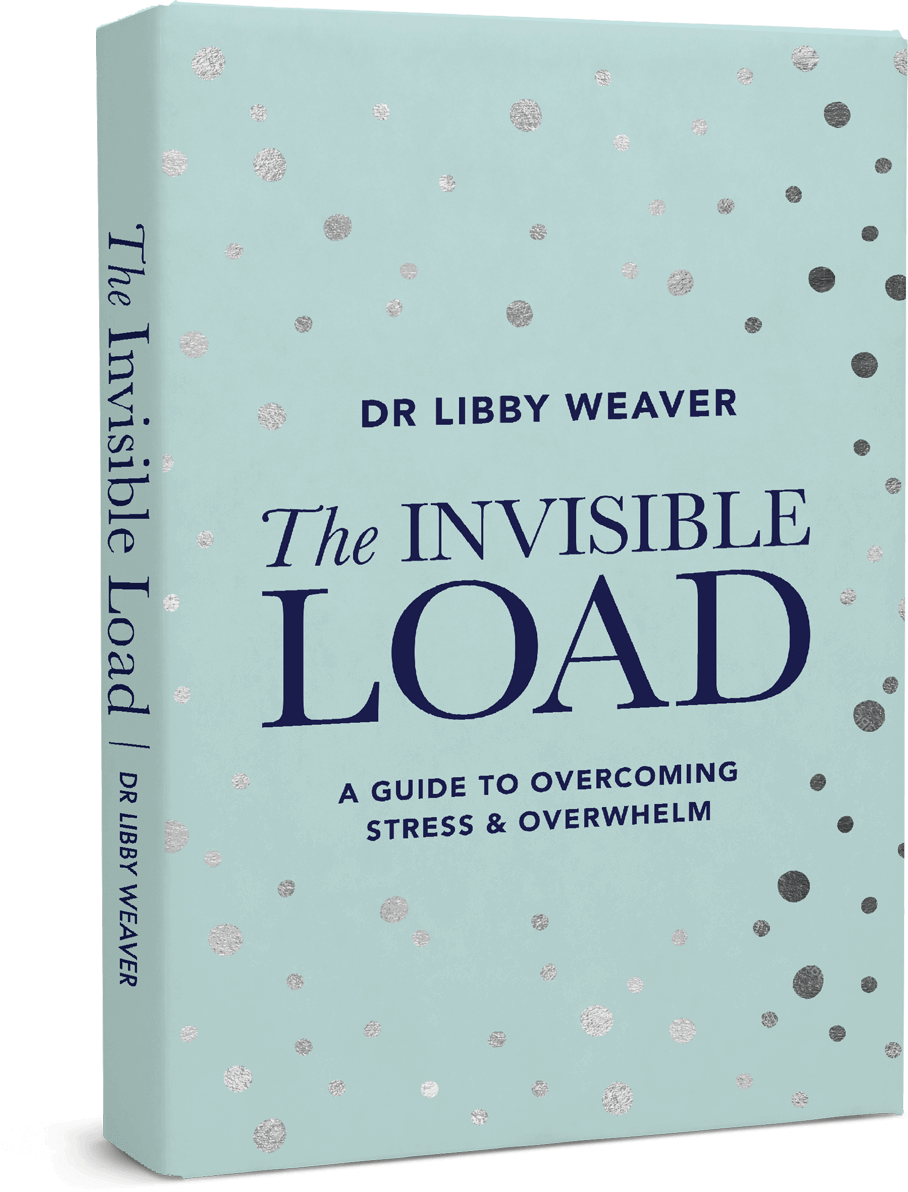 “Let’s say you’re working from home”, Dr Libby tells our founder Georgie, “and a colleague rings you up and says ‘Where’s that work? I needed it yesterday.’ Now we don’t always just hear what someone says. We hear what we think they meant. So sure, they’ve asked for work, but also what we think we’ve heard is that they are criticising us in some way, that they disapprove of us in some way. They think we’re not a hard worker, that we’re inefficient, that we’re lazy, that we don’t value our jobs. Something along those lines. And that’s what makes their request for work stressful. It’s what we imagine they’ve said, but they didn’t say that…that’s where so much stress comes from, and that’s the stress we can do something about, and that’s the part I’m interested in.” Sound familiar? Me too. If you’re guilty of reading between the lines, then you’re probably used to these imaginary conflicts, which build up as we internalise them and carry them around. Dr Libby calls it the ‘backpack’ we wear, which grows heavier as we load it up with stresses. And as for that overwhelm, according to Dr Libby, it’s a matter of boundaries. “It’s incredibly important, I think, that we identify what our priorities are”, she explains. “When you’re asked to do something and you’re feeling overloaded already – your days are already jam-packed, and then someone asked you to do something – every bone in your body is screaming to you, ‘please say no.’ And then what you find comes out of your mouth is ‘sure, yes of course I’ll help you.’” But how do we actually go about saying no, when it feels so awful? Dr Libby says it’s key to let go of trying control how other people see us. “When we want to say no, but we find ourselves saying yes to something that we don’t want to be part of, ultimately what we’re frightened of is what that other person is going to think of us. And we’re worried that they’re going to think that we are a dreadful person, that we’re thoughtless or that we’re not kind or we’re really selfish. And yet, they’re not going to think that at all.”

Stress has very real, very physical, effects on our bodies, as Dr Libby explains. So saying ‘yes’, when what you want to say is ‘no’, isn’t always as trivial as it may seem. On the podcast, Dr Libby breaks down how stress hormones impact everything from our weight, to our fertility, to our metabolism. It’s a wake up call if you’ve been telling yourself stress is just a side effect of being a grown up. As predicted, after over a month of radio silence, this week I’ve been thrown back into a whirlwind of scheduling. I’ve missed friends and family during isolation, so “yes, of course!” I say to every proposed visit. ‘Nothing is more important than the people we love’, I think, knowing a long lunch catch up will mean I’m working at 10pm after my daughter goes to bed, food prepping at midnight and setting reminders in my phone at 3am when they occur to me. And while I am VERY ready for that first post-quarantine Margarita, Dr Libby has convinced me that there are some isolation-habits I should hold on to. An empty calendar – at least some days – is priority number one. Listen to our podcast episode with Dr Libby here.