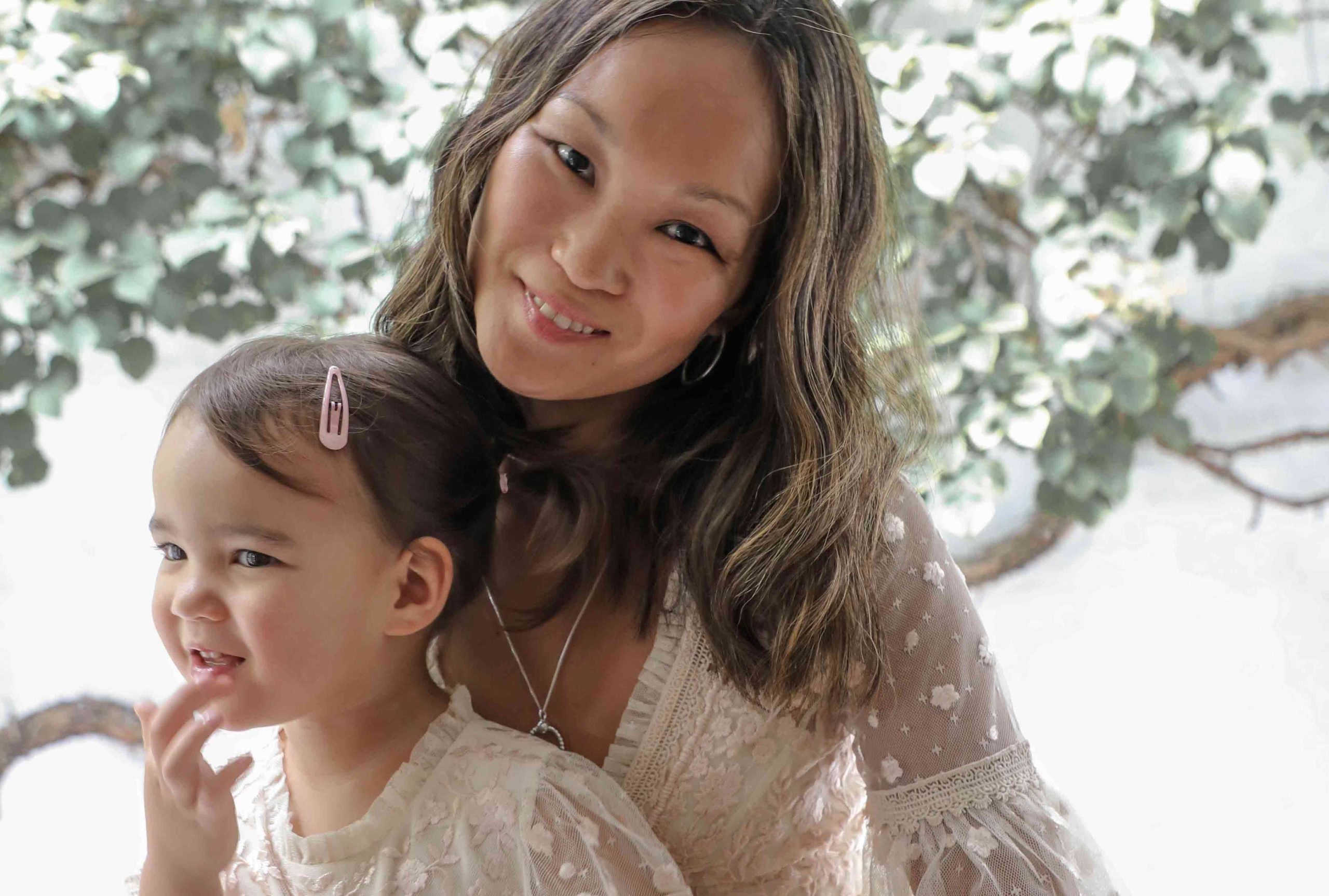 Japanese-Londoner Mariko Kuo might run a hugely successful fashion, travel and lifestyle blog but day-to-day, she’s a lawyer, and, as you’ll have discovered if you’re one of her 96K followers on Instagram, a doting mother to daughter Ayame....

Her blog began, simply, as a place of self-expression away from her corporate world (she struggled with the fact that she was the only woman in the room on many occasions and the perceived pressure to dress like those in the room). There’s her lawyer side, her creative side, and then there’s her role as a mother, which despite a straight-forward pregnancy, ended with a birth which she describes as “one of the most challenging experiences I have ever had.” Those blurry new days of motherhood are now behind her, and here she shares the ups and downs of motherhood, her love for fashion and why the daily cuddles and kisses are the most rewarding part of motherhood. 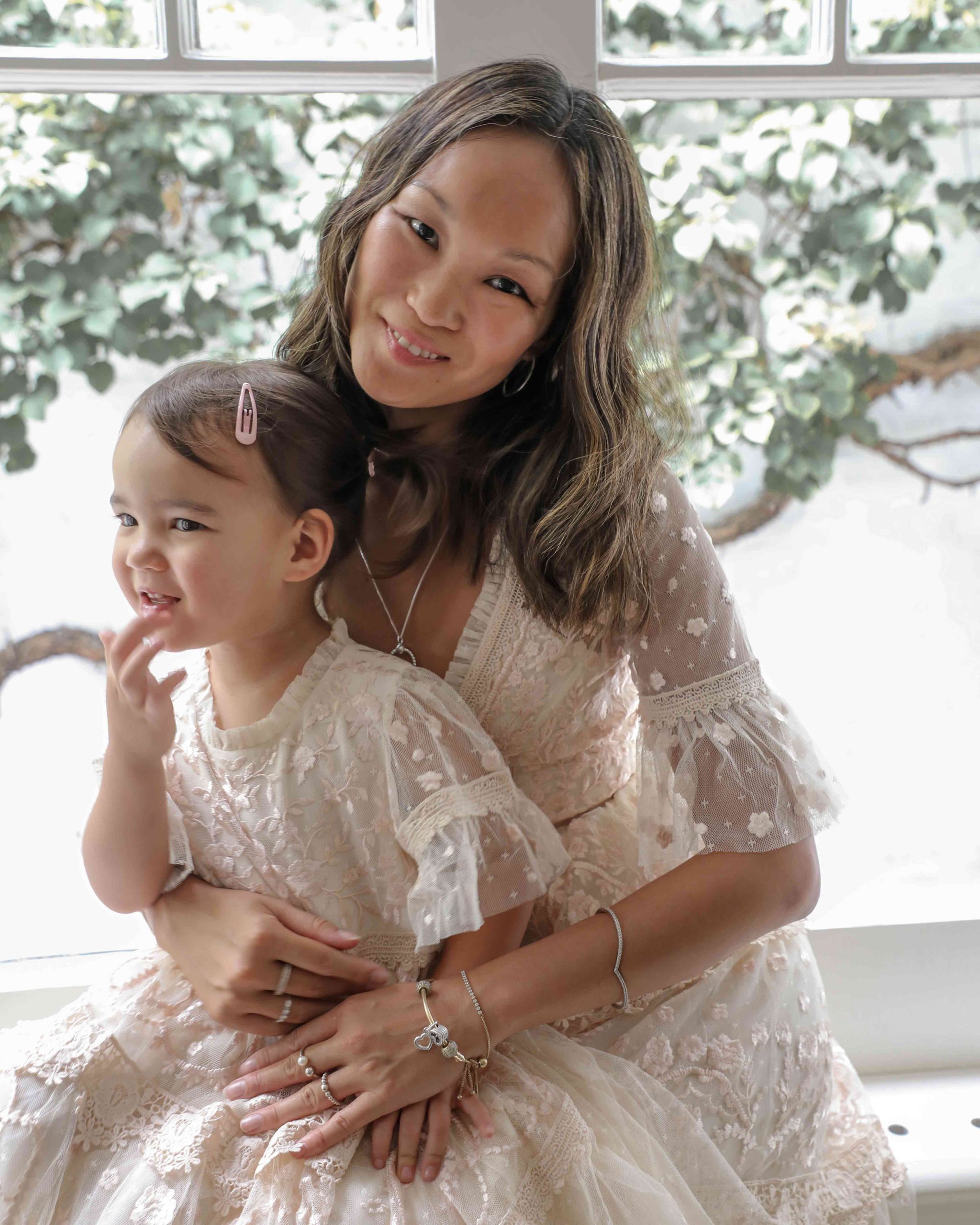 You were born in Japan – what are some of your earliest memories of Japan?

One of my first memory is going to the Ueno Zoo in Tokyo when I was around two years old with my family.  After an exciting day spotting pandas, elephants and gorillas, I was so excited to have my first ice cream ever.  As I was severely lactose intolerant as a baby, I couldn’t have anything sweet for a long time and so I remember that ice cream was such a special treat. I do feel for my poor parents though as I’m sure they had to deal with my upset stomach afterward.

You moved to London when you were 18 – what are your most vivid memories of arriving in London?

I was so excited when I first saw a double-decker bus. I managed to get a seat at the front of the top floor and so I rode the bus until the final stop watching the city pass me by.

Tell me about your journey to motherhood – what were the ups and downs?

I was diagnosed with endometriosis and my doctor had warned me that getting pregnant might not be straight forward. We were therefore bracing ourselves for a long process so was really surprised and felt extremely lucky when I got pregnant very soon after we started trying. I think my partner being very supportive and making sure that I wasn’t anxious worked the magic. Due to my endometriosis, I was initially categorised as higher risk, but I found my pregnancy to be generally smooth sailing. I became lactose intolerant again, but once I knew that was the issue, it wasn’t a difficulty cutting out dairy out of my diet. Ayame’s birth, however, was one of the most challenging experiences I have ever had. Because I found my pregnancy straight forward, I wasn’t prepared for the birth process to be so difficult. After being in labour for over 50 hours, my consultant tried forceps but still couldn’t get her out. I ended up having an emergency C-section in the end and both Ayame and I had to spend some time in the ICU.

How were the early days of motherhood for you – what do you remember about them?

The immediate days after giving birth were very difficult for me mentally as I hadn’t prepared myself for the physical implications of having a C-section. I found it really upsetting that I couldn’t stand up, carry my baby or do simple things like go to the bathroom myself. I remember bursting into tears the first time I was outside trying to push the pram and only managed to get to the end of our building. On the other hand, I was so lucky with Ayame being such a great baby. She was a great eater and managed to latch on to me immediately. I think breastfeeding helped with her sleeping too. I loved how we bonded over breastfeeding sessions and I remember matching my sleeping patterns with hers really helped with everyone’s sleep. 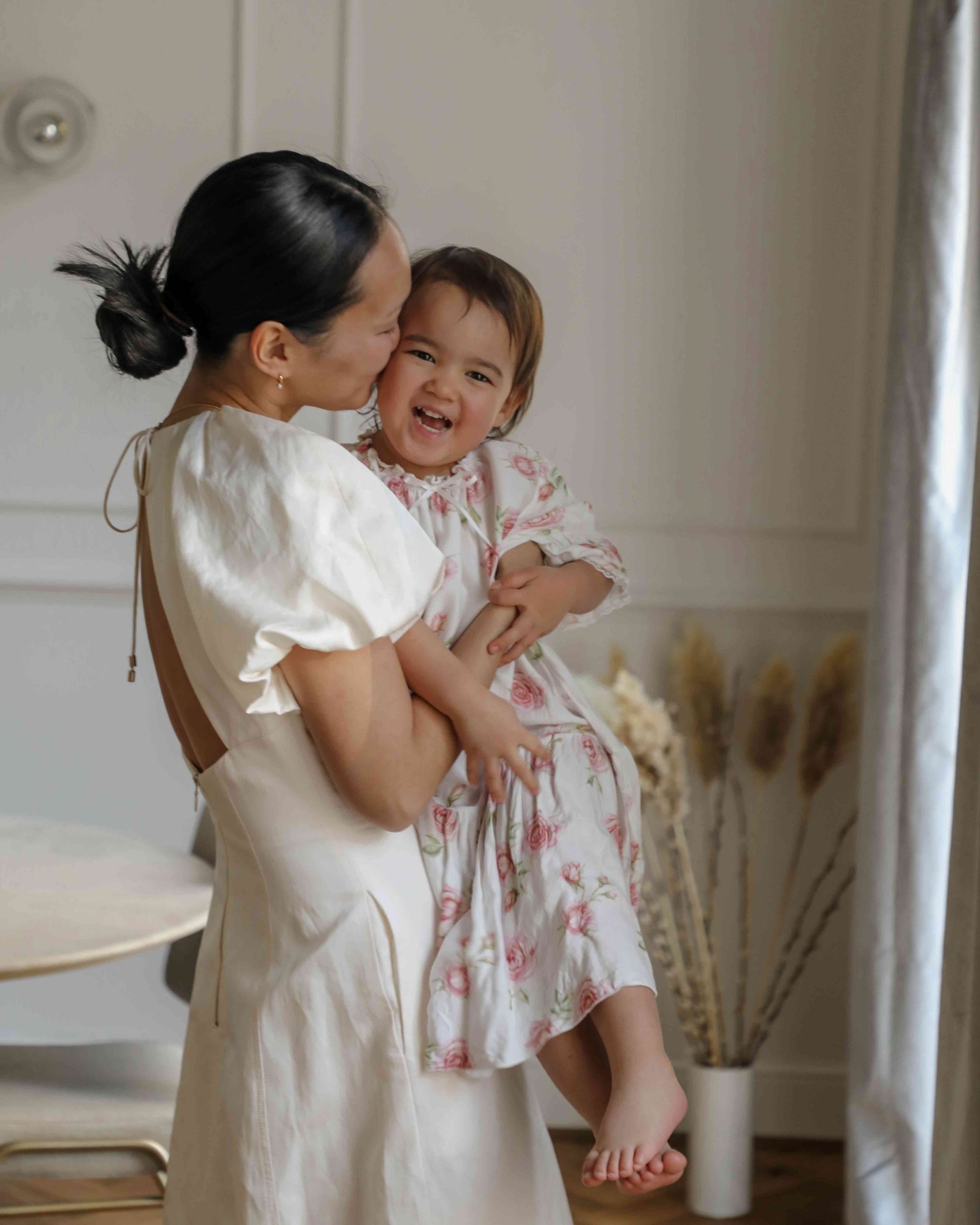 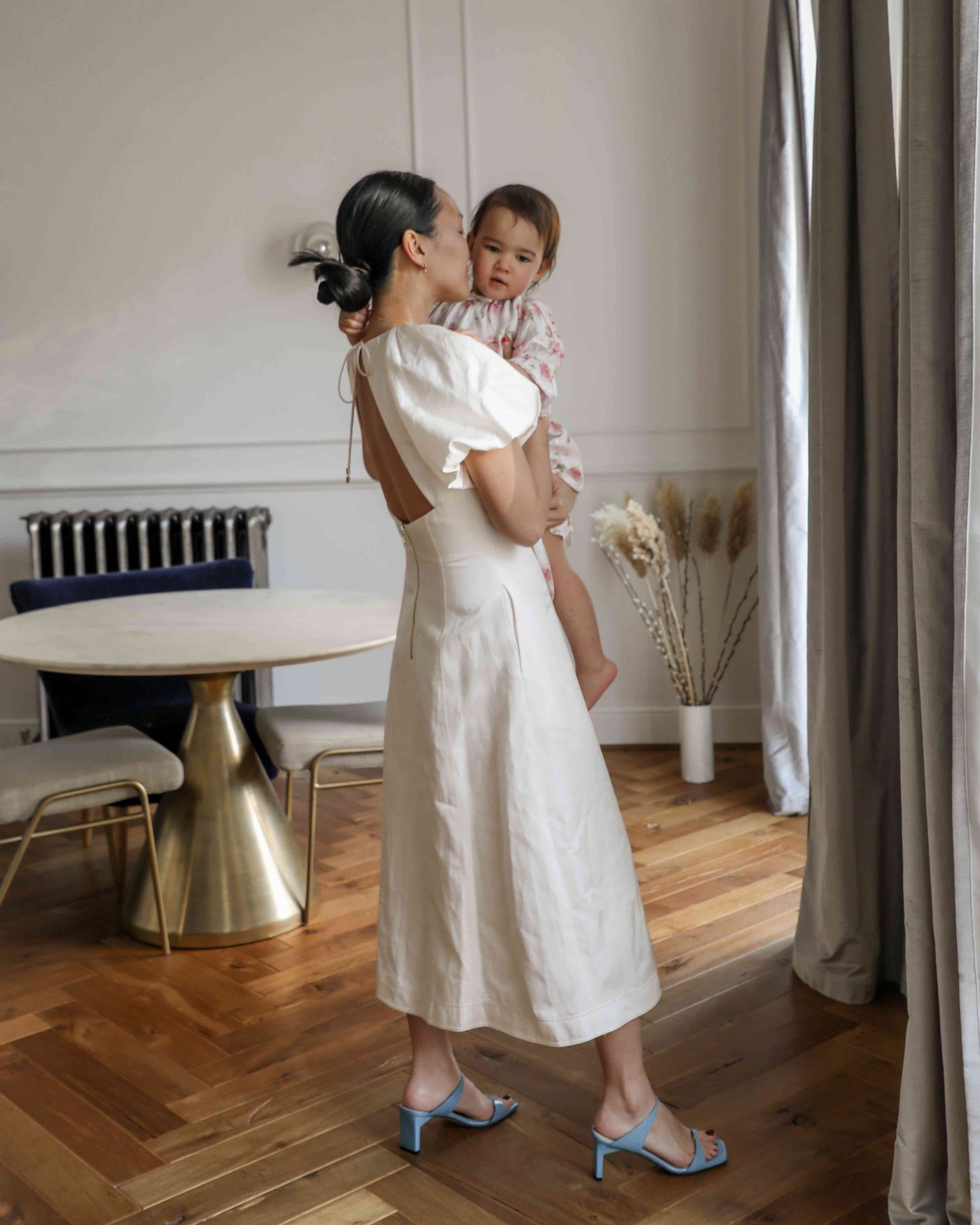 In Japan, even very young children are expected to be independent and self-reliant. Is this something you teach your daughter?

You’re a lawyer – did you always want to be a lawyer? And what do you love most about the profession? Did you take maternity leave?

In the typical Asian tiger mother way, my mother suggested that I become a lawyer initially. I love the professionalism involved in being a lawyer and the breadth of knowledge I have assimilated through the various deals I have worked on. I was very lucky and took 18 months off for my maternity leave.

Do you ever feel mother’s guilt?

I felt an enormous amount of mother’s guilt when I put Ayame into nursery when my maternity leave was coming to an end. She had trouble adjusting initially and would cry at every drop-off. That really broke my heart and got me questioning whether I am doing the right thing. Now, I think it was the best decision I made as Ayame absolutely loves her nursery and I feel like my confidence as a woman (and not just a mother) has come back.

“ She had trouble adjusting initially and would cry at every drop-off. That really broke my heart and got me questioning whether I am doing the right thing. Now, I think it was the best decision I made as Ayame absolutely loves her nursery and I feel like my confidence as a woman (and not just a mother) has come back ”

When did you begin blogging – and when do you make time for your content creation?

I started blogging when I was a trainee lawyer. My law firm then had a lot of strict rules about how women in the office should dress which I thought was quite sexist and also not particularly helpful. The guidance included things like women should always wear high heels, never wear floral prints or bright coloured outfits. They all seemed to suggest that women in the city had to conform to a conventional look and blend into the background.  I, therefore, started blogging to try and break through these misconceptions by talking about ways to bring out our inner confidence by the way we dress for the day. I love talking about workwear fashion and it’s been great to see how even in the short span of my legal career, I think the way women dress for work has transformed dramatically from grey suits to any type of garment – the key is wearing things that make you feel good about yourself and looks professional.

What are your favourite kidswear brands?

I’ve quite a spontaneous dresser so I usually dress according to my mood in the morning. I do try and wear outfits that are versatile if I know it will have to go from day-to-night.

What are your favourite brands to wear personally and how often do you shop?

My favourite brands are Bottega Veneta, Jacquemus, Joseph, Sandro and Me+Em. We’re trying to renovate our new house at the moment so unfortunately, my partner has put me on a no shopping ban!

How much time do you spend on social media?

A couple of hours (max) per day. I find myself getting lost in the social media wormhole very easily so I now only allow myself a few hours a day to respond to my DMs and comments.

What are the biggest misconceptions about digital influencers?

I think social media allows influencers to tell a story of their lives, but in sharing their lives, people seem to think that they are also open to constant criticism.

How has your family adjusted during COVID-19? How do you create work/life boundaries working from home?

I’ve found lockdown quite challenging particularly because of the lack of work/life boundaries. As Ayame’s nursery was closed, having to work around her needs whilst juggling the countless number of work calls and deadlines was really challenging.

What has been the most challenging stage of motherhood for you?

Going back to work after my maternity leave was a very big challenge for me. It was the first time I was spending time apart from Ayame, which I found very difficult to cope with. Mama had a lot of separation anxiety to deal with!

And what is the most rewarding part of motherhood for you?

The daily cuddles and kisses, the unconditional, everlasting love I feel for my daughter, the special mother and daughter bond between us.