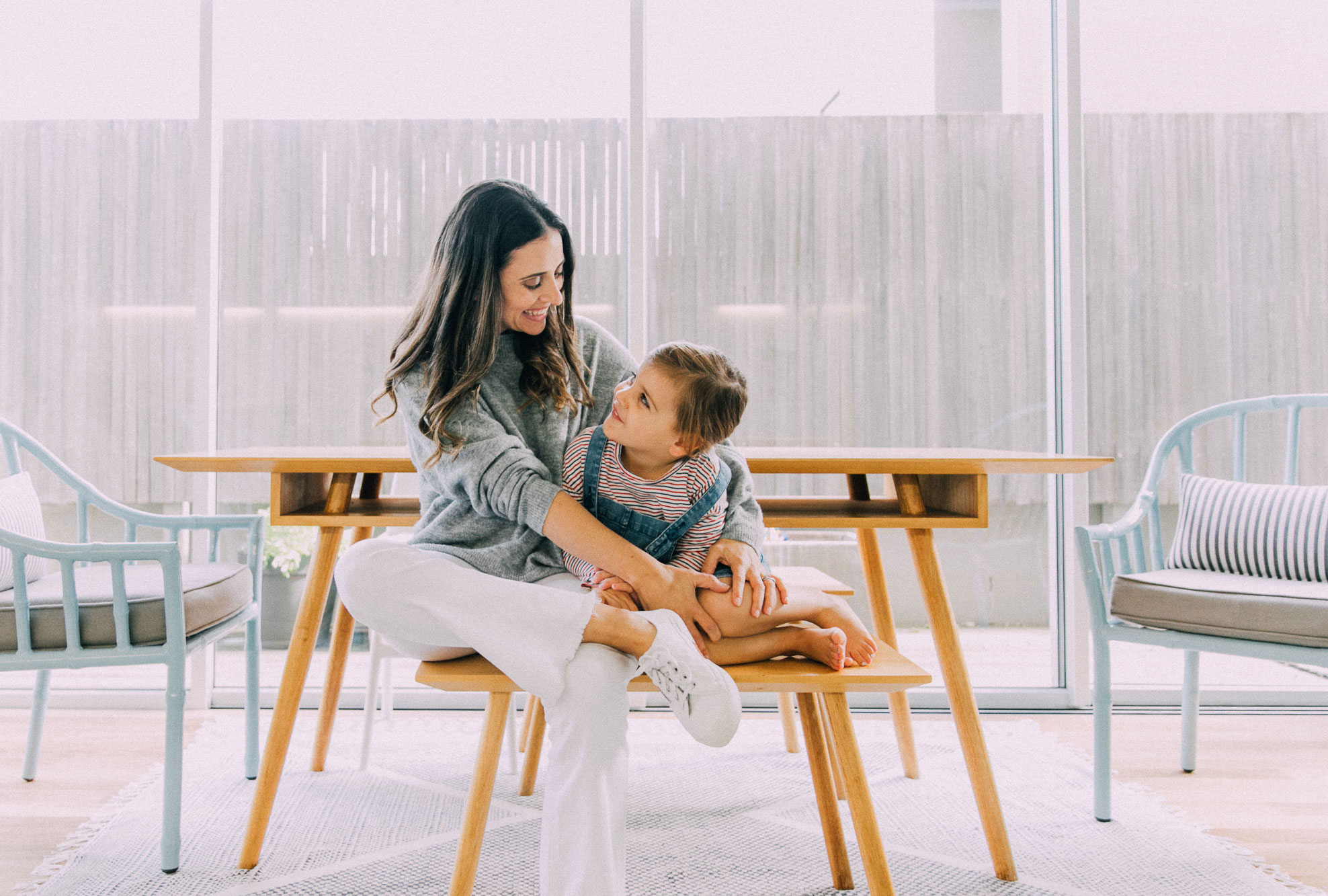 Here I am, almost one month into life as a “school mum” and as expected, it’s been a whirlwind of emotions...

The lead up to get here (also known as the world’s longest break – was it 457 weeks of Christmas holidays?) was filled with anticipation – how would we cope with the daily drop-off? How on earth was I going to fill a lunchbox with enticing foods five days a week? Would my daughter make friends? Would I make friends? I’m happy to report that the entire experience so far has been pretty positive. All the things that seemed scary and daunting to someone who was used to the luxury of long daycare hours and a week filled with as many activities as babycinos have actually been ok, and I’m relishing in the fact that our family has the familiarity of a predictable routine back in our lives. But it’s certainly a work-in-progress, and as the days turn into weeks, I’m still fine-tuning our new normal. There are a few systems I’ve put in place to allow for a more stress-free and enjoyable time at the school gates come 8:55 every morning, so in the spirit of sharing, here’s what I’ve learnt as a brand new “big school” mum…

1. Lunchbox stress is so not worth it

I love and care about food. A lot. I also love to feed my kids nutritious and delicious meals, but when I lost my head a little (ok, a lot) over the appropriate lunchbox storage and contents to buy for my daughter’s first week, I knew I had to calm-the-heck down. The clincher? Following a handful of new Instagram accounts with the words “lunchbox” in the handle. Here’s a tip: if they’re showing images of cut-out sandwiches shaped as puzzle pieces or rice moulded into pandas, simply unfollow. Yes, it’s adorable to make such an effort with food, but it’s also totally not necessary and makes zero difference to what they actually eat at the end of the day. In my experience, it takes a while for kindergarteners to get used to the whole lunch/snack/fruit-break routine, so if your child brings home an almost-full lunchbox at the end of the first few weeks, don’t panic.
I’ve found keeping things simple works best with our daughter, and also involving her with the weekly meal plan so she knows what to expect really helps. We stick to a pretty standard carbohydrate/veggies/fruit/dairy scenario but I always throw in an unexpected twist to keep things interesting, e.g. a homemade muffin, a new fruit or some form of dark chocolate product from the health food aisle that seems healthy but probably isn’t. As soon as I took a step back and simplified her lunch and snacks, the lunchbox came back empty. The takeaway here? Don’t freak out if you send your kid to school with a square-shaped sandwich, last I heard it still tastes the same.

2. It’s a period of adjustment for everyone

I’ve learnt pretty quickly that having a new kindergartener in the house means a change in routine for everyone in the family. The daily pick up and drop off could mean a change in work hours for one or both parents, while the commute to school can affect older or younger siblings and their usual schedules.
For us, the main difference has been in the afternoons and evenings. Our daughter is usually exhausted and starved at the end of a school day, so I’m combatting the two with a slight tweak in our usual routine. Straight after school, I give her a small snack to keep her going until my son’s daycare pick up, which is then closely followed by an early dinner for both of them – I’m talking 4:30 pm right now. I’ve found giving them dinner earlier helps curb any ratty behaviour and sugar cravings they may have after a long day, and it’s actually also done wonders for their eating habits. If they are still hungry and want a snack later, I’m pretty chilled about it, as I know their main meal has been eaten well. We usually eat breakfast together as a family most days and have meals together all weekend, so I don’t worry about the separate mealtimes during the week. It’s a system that works for us right now and seems to solve the overtired/ravenous mood that hits school kids come 3 pm most days.
My point here is that in the early days, you may have to adjust your usual schedule to accommodate for your child who is experiencing a whole new world right now. There is no right or wrong, so once you find a system that works for you, stick to it, even if that means having to prep dinner straight after lunch (my life right now).

3. Get involved, but also don’t

I think it was at school orientation that I quickly realised I’d never be a P&C, class-parent type-of-mum, but that doesn’t mean I don’t want to be involved. Instead of putting my hand up for every activity and volunteering opportunity, I’m trying to take a more balanced approach. As much as my daughter would love me to be around at school when possible, I actually think she flourishes more when I’m not around so often, as it’s during these times where she gains confidence and builds resilience.
In the first few weeks of school, you’ll be inundated with invitations, emails and information and it’s only natural to feel like you have to participate and be actively involved in all the things, but I’m here to tell you, you don’t. Firstly, it’s not always realistic for parents to be so available during the week, and feeling guilty about it gets you nowhere. Secondly, I’ve always believed that having a little separation actually goes a long way when it comes to letting your kids grow and thrive. While I’ll be helping out at reading time and attending any relevant parent meetings, I’m going to put the brakes on being the mum that’s always the last to leave after morning drop off. I guess the best way to describe this is to have faith in the system – your child will be fine, and schools are more than equipped to handle kids, even in tricky times. If you don’t want your child’s school schedule to become your own full-time job, then don’t let it. And a great tip I got from our interview with Jamila Rizvi last year – remember to add your partner’s name and email on all the school files so he or she can receive all the correspondence, too. Sharing the load is imperative when it comes to the constant (and I mean constant!) school communication.

During pre-school, you may have been used to a jam-packed week full of activities, play dates and excursions, but we’ve pared that right back in kindergarten, allowing a little breathing space for the period of adjustment in term one. Every child is undoubtedly different, but I know that rushing to gymnastics/ballet/soccer/etc. after school a few days a week would have been too much for our daughter both mentally and physically. Instead, we’re taking things really slowly and taking advantage of warm summer afternoons hanging at home, early dinners and simple playtime. It’s really taken the edge off the often-hectic evenings filled with rushing from one activity to another, and I’ve even noticed a closer bond between my daughter and son as a result of, well, doing nothing. If you have the luxury of time and can afford a few afternoons at home to just chill out, I highly recommend it for new school starters in the early days. If it avoids over-tired meltdowns at home and in the classroom, then slowing down can only be a good thing for everyone.

5. It’s Kindergarten, not the HSC

And, breathe… Even before our daughter started school, there was a frantic feeling in the air amongst other pre-school parents surrounding the idea of “school readiness”. Discreetly and often not-so-discreetly, you’d be quizzed on what stage your child was at in terms of learning. Was she reading? Writing? Concentrating for long periods of time? Asking the right questions? Reading the right books? Could she open a lunchbox? Lock and unlock a bathroom door? Buckle her own shoes? I could go on (and on, and on, and on…), but I won’t, because it’s all absolutely ridiculous.
As much as everyone may have the best of intentions, can we all just relax for a minute and remember that these kids are starting kindergarten, not university. It’s totally normal for all children to be at different stages of learning, even when they’re the same age, and that it’s often best left to the experts to teach the basics of reading and writing following the guides of the school and curriculum. This, to put very simply, is what school is for – to teach your child, so why pressure them at home? My husband and I have made a very conscious decision to avoid the comparison and competitive talk amongst other parents, as we don’t want to remember the first years of her school life as being fraught with feelings of anxiety and inadequacy. I mean, when did it all get so serious?
Which brings me to my last point… when it comes to school life, I’m following in the wise words of the Urban Dictionary and parting with this sentiment – “you do you,” because thankfully, there are no school rules when it comes to being a good mum.
Image: Grace Alyssa Kyo