One Inspiring Mother Shares Her Journey Of Adoption

“My husband and I moved to the United Arab Emirates in 2013. He is a partner in a law firm, and back then he had been spending increasing amounts of time in the Middle East for work. We decided that moving to Dubai would lead to more time together and so I quit the job I adored, PR at Christie’s auction house in London, we rented out the riverside apartment we had only just finished refurbishing, and we packed our bags for the desert. I took his career opportunity as a sign: perhaps a new start, not working, not stressing, spending time getting fit and healthy, would be exactly what I needed, and we would finally become a family...

As the story goes, when I was five years old I gate-crashed my parents’ dinner party and was asked what I wanted to be when I grew up, and apparently, without hesitation, I replied, ‘A Mummy’. There was never any doubt in my mind that I was meant to be a mother one day, I saw it as my destiny, but I also believed that every woman deserved to be a mother. I never expected it to be so difficult to achieve. I would have had children as a teenager if I could have. My broodiness kicked in almost as soon as I hit puberty. But I’m a hopeless romantic and waited to find the right man first (that’s a whole other story!). Within three years of meeting each other, we had our idyllic English country wedding, and we started trying to conceive immediately. I look back now and smile at how naïve we were, excitedly walking around Rome on our mini-moon thinking how we may have made a baby and be on the cusp of starting the family life we had always talked about. We bought a flat, and I occupied myself with doing the place up, nesting, but months passed and still nothing to report on the baby front. I spoke with my doctor, but the standard response was that unless you had been trying for a year then you hadn’t been trying long enough for your fertility to be deemed an issue. So we continued as we were. By the next Summer, my husband was in talks to move to the Middle East. The whole process dragged on for months and we didn’t actually move until the following February. But it kept us busy and it didn’t feel like the right time to be having fertility tests if we were about to emigrate, besides, he had enough on his plate to be dealing with. When we arrived in Dubai, having holidayed there years previously with family I thought I had an idea of what I was getting myself into. But I hated it. My husband travelled a lot. And I knew one family friend who lived in Dubai, but I didn’t feel I knew her well enough to burden her with all of my worries, which left me with no-one around to talk to. From an external perspective I had a pretty perfect life, but in actual fact, I hated spending lonely days by the communal pool working on the best tan I’ve ever had. I’ve no idea what I would have done if every day hadn’t been sunny. 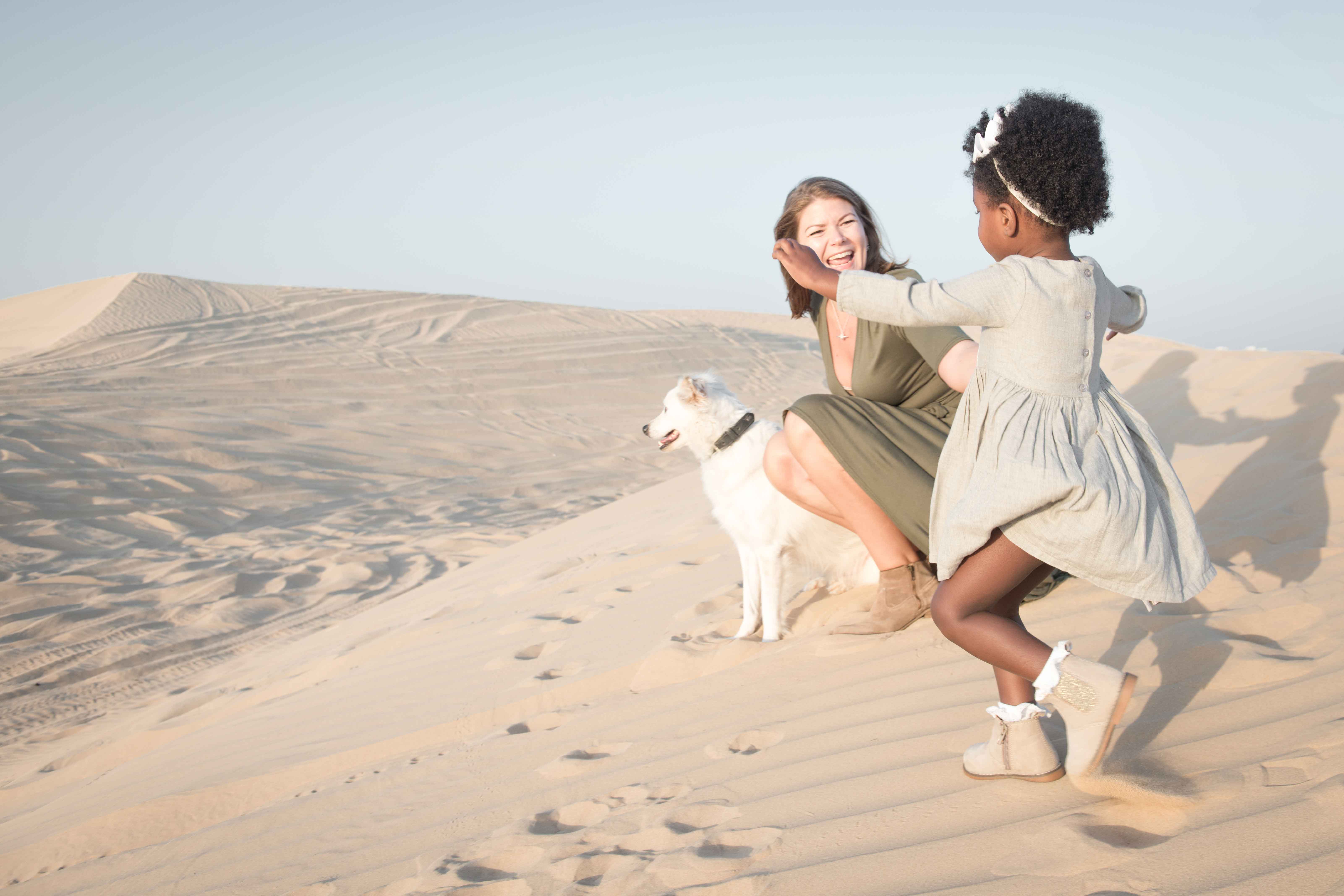 Soon, I became closer with the family friend (she is now one of my best friends, in fact) and confided in her that our struggle to conceive was getting me down. Sure enough the following month she had news that she was pregnant. It was the first time I’d experienced that joy tinged with envy and sadness, but I took it as a training run for me, and went through the whole pregnancy with her, almost pretending to myself that it was my own. I asked a million questions, planned her baby shower, and once the baby was born I hit a bit of a low point. She had a perfect little boy and I was still was no closer to becoming a mother. Sadly, from my experience and that of friends, I have seen that fertility issues can both make and break a couple. We were very fortunate that it brought us even closer together. Although it wasn’t all so straightforward, and as a couple who never usually argues, the years of trying were awful and tear-stained behind closed doors. All the while I put on my bravest face for the outside world when constantly questioned regarding when we would procreate – why do people feel the need to know such intimate details of other people’s life plans?! I’m fairly certain I was a hideous hormonal mess throughout our trying years, particularly during IVF, and my husband did all he could to put a smile on my face. It was important that we were both as desperate as each other to become parents and it wasn’t one-sided in any way. Sadly we both blamed ourselves too, but we never did get to the bottom of why we never got pregnant. After years of tests with no real answers, and two failed IVF attempts we came to the realisation that we had been going about it all the wrong way, perhaps we were never destined to have a biological child.

Adoption may not have been our first instinct when it came to becoming parents, but once we had found the right path it was the brightest light at the end of a very dark tunnel. It felt as though we had gone from ‘will we ever become parents?’ to ‘when will we become parents?’ with the added benefit of being able to give a loving home to a child that really needed one. To be honest, we couldn’t believe we hadn’t thought to follow that path sooner, and when we met our baby at nine months old a large part of me was sad that we hadn’t begun the process sooner and met her earlier. But it’s much more complicated than that, and that’s just not how it works. Had anything been timed differently along our journey to parenthood, we would not have met and fallen head over heels with our amazing daughter, and I honestly believe that we were always intended to become her parents. Every adoption is different, but as an expat living in Dubai and adopting from Ethiopia we were required to put together a dossier and home study consisting of documents from our home country, our country of residence and the chosen adoptive country, as well as taking psychology tests, undergoing a home inspection, and completing hours of counselling with a social worker. Once all this, we travelled to Addis Ababa to meet with facilitators and handover our paperwork – personal and family history, police checks, character references, bank account details, and more. By this point, we thought we had been waiting long enough to become parents, but this was when the real waiting began, and it was agonising. We waited three months for what you call ‘a match’, and then one day we got a message that made all of our dreams come true. It was followed by a couple of photographs of the most beautiful person I’d ever laid eyes on. We had to get things in order before travelling, and that’s when we chose to tell our closest friends what we had been preparing for over the last 12 months. Up until that point, only family had any idea. It was a hugely exciting and emotional time. We then flew to meet her the following week and discovered the true meaning of love at first sight. The videos I have from that day, 20th May 2016, are my most precious possessions. We then spent a week in Ethiopia going back and forth to the orphanage, spending every minute with her that we could. And in the evenings we watched and re-watched all the footage we had from the day, and proudly shared it with family and close friends.

Based upon previous adoption stories from Ethiopia to Dubai we expected to have our baby home within a couple of months. However, paperwork and bureaucracy led to delay after delay, and each week the finish line moved further from our reach. I’ve always been a real planner and found it so tough to wait and watch Bea growing up without us, although we did visit as much as we could, every couple of weeks. We were optimistic to have her home by the end of July, then perhaps just before summer court closures in early August, in time for her first birthday. Missing that deadline was a huge blow, leading to a couple of months without hope as no court cases would be heard again until October, but we hoped we would then at least be near the top of the list. In October, Bea took her first steps unaided, walking towards us as we entered the orphanage gates. But there was still no news on our (or anyone else’s) paperwork, the country’s adoption system was in deadlock. November came and our patience was dwindling and our anxieties were mounting. Our whole life was on hold so that we could drop everything at a moment’s notice to go and pick her up as soon as possible. December came and we decided we could wait no more. We made plans to go to Ethiopia and stay for as long as was needed. We had a nursery ready and we had our pram parked in the hall. We booked our beloved dog into kennels indefinitely. We put a baby seat into the car. We had her Christmas presents all wrapped up and waiting under the tree. We didn’t tell anyone our plans, but we were going to stay for as long as it took. Christmas could be postponed. But we couldn’t have a piece of our hearts living thousands of miles away anymore. Finally, on December 8th, we got our miracle, and our paperwork came through. On December 13th, we went to court and legally became parents. And the following day we returned to the orphanage for the very last time, leaving as a family. Then we were racing against the system to try and get all the further documents we needed ready in order to be home to celebrate Christmas. We eventually landed back in Dubai on December 21st; Bea was the greatest gift ever. 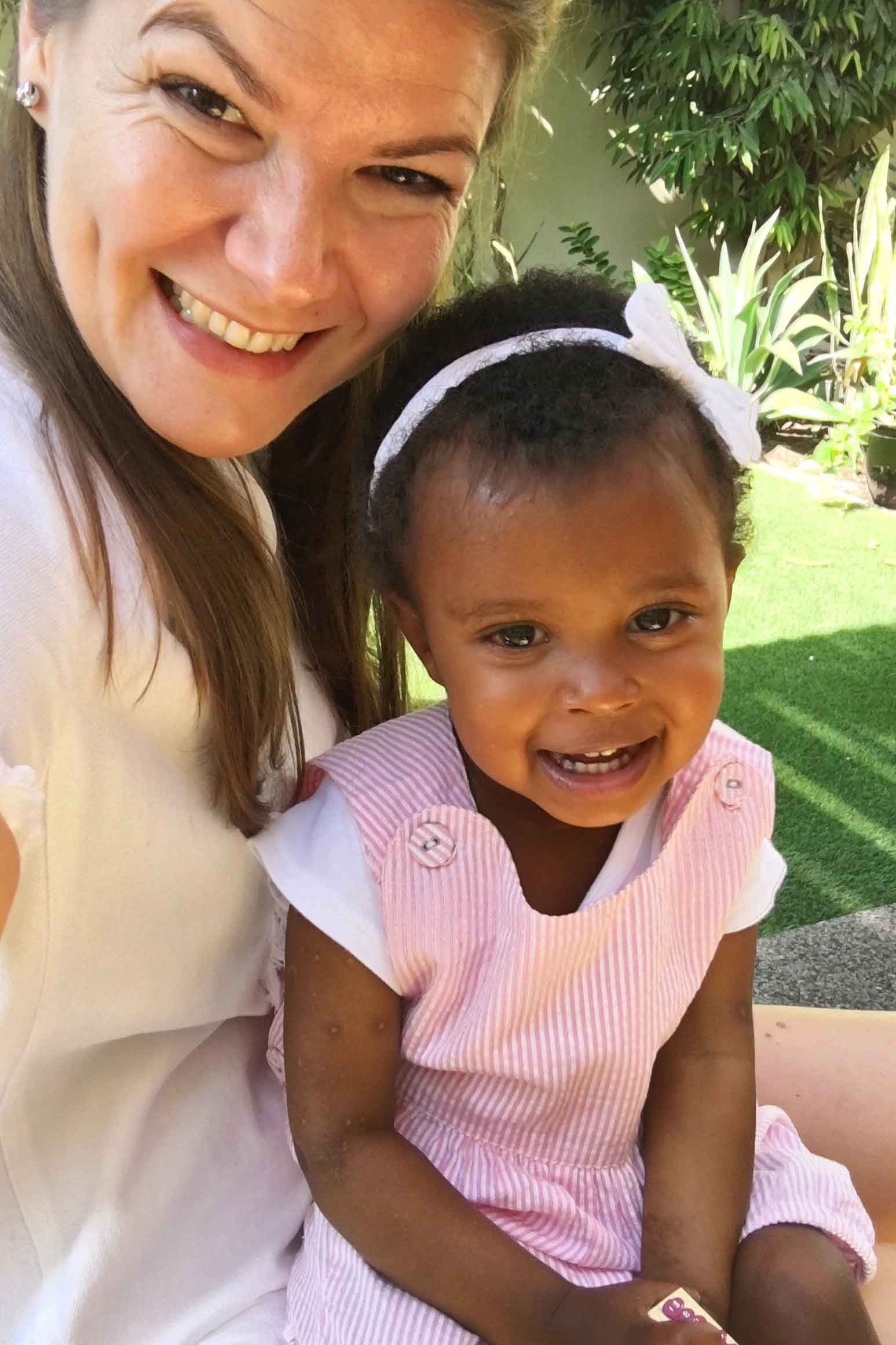 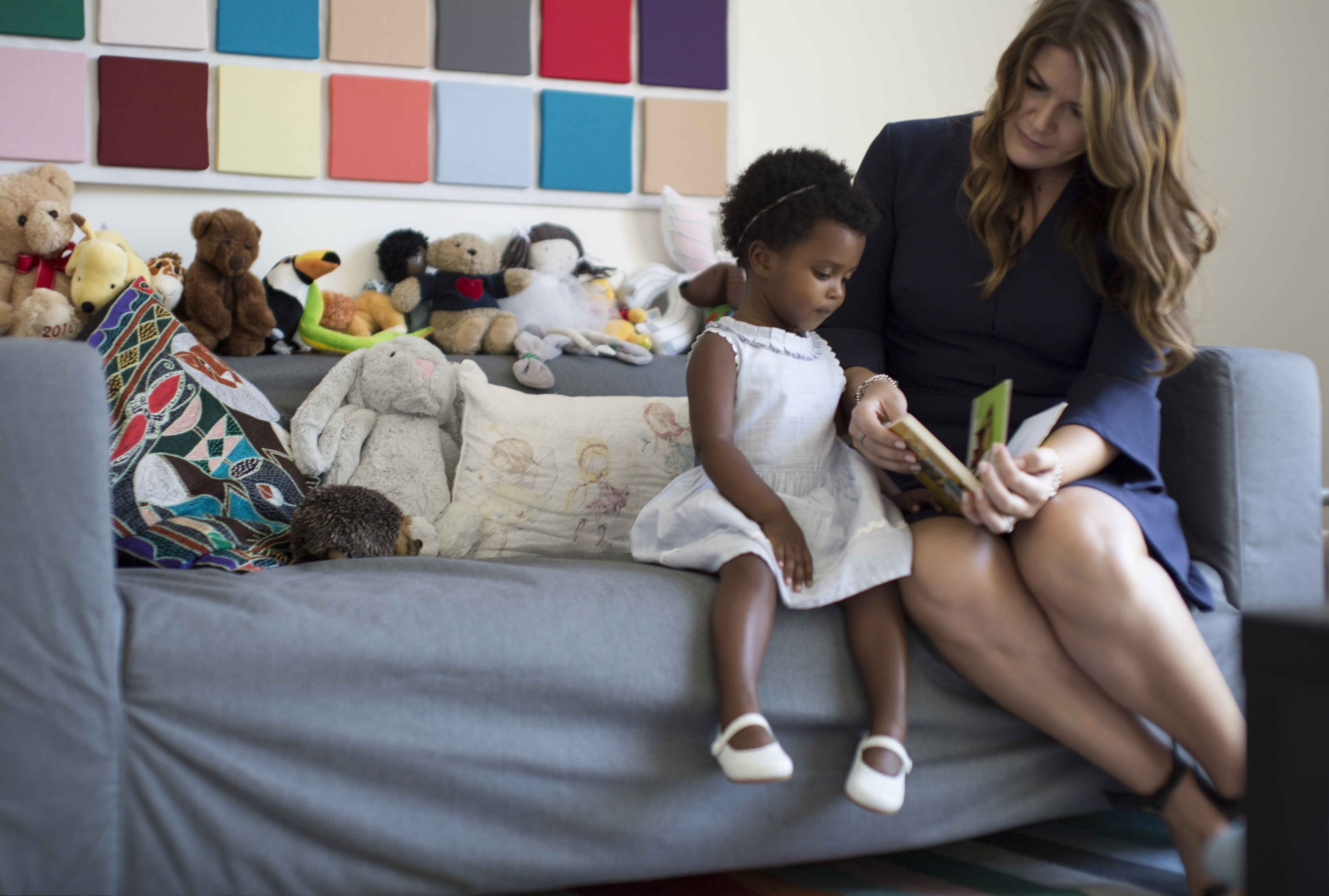 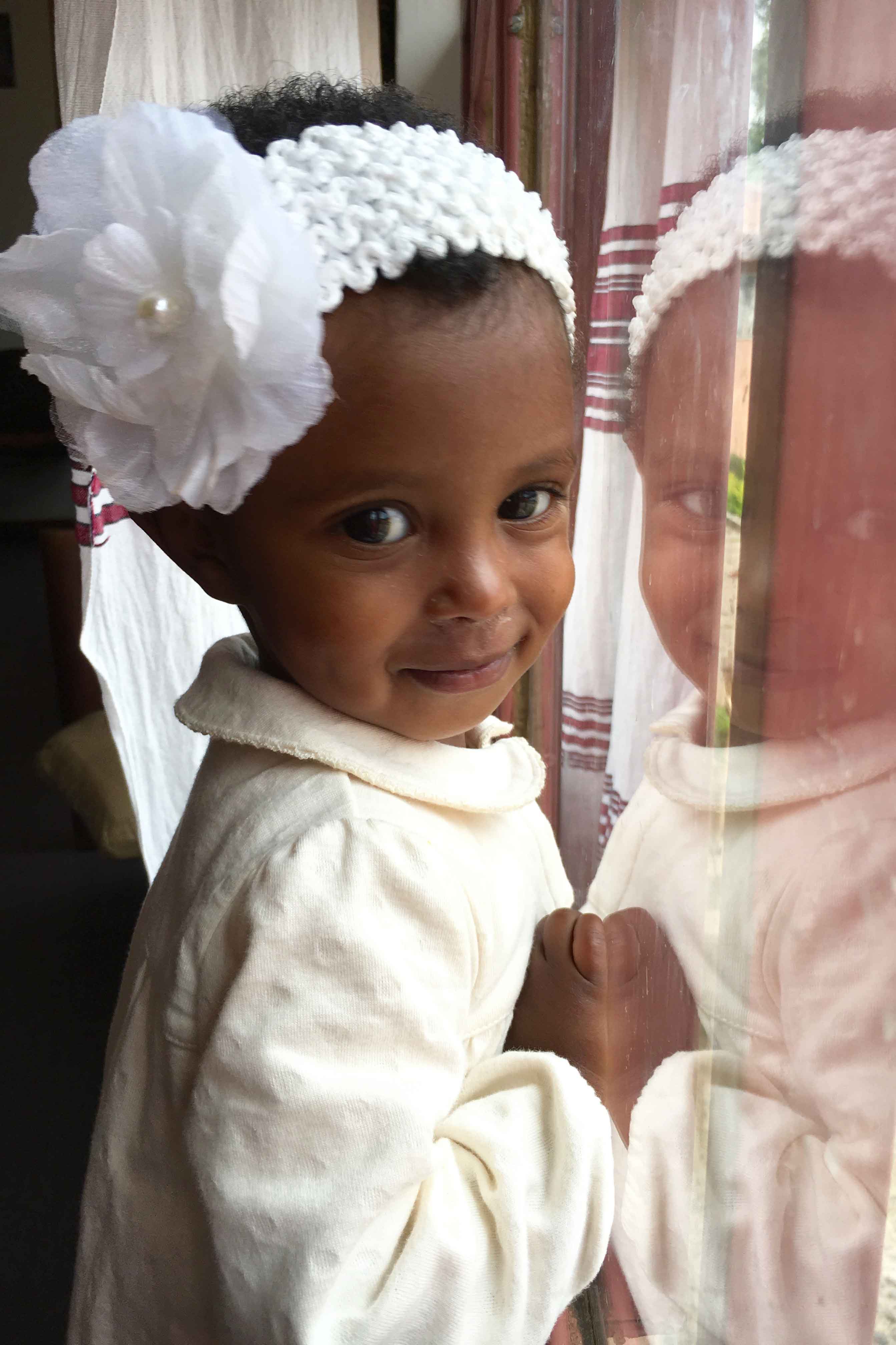