“IVF is a bumpy road. But the bruises you get along the way fade once you have that baby in your arms” 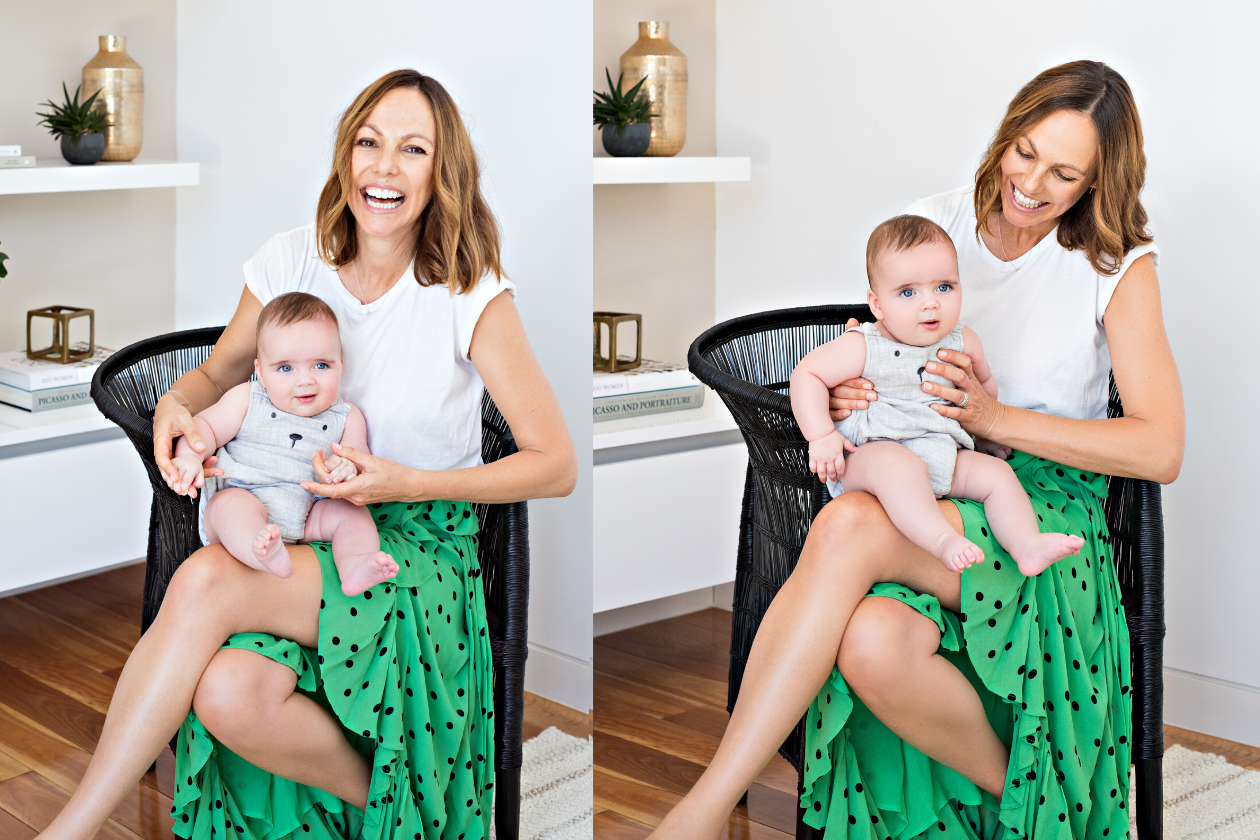 Here, entrepreneur and mother Linda Smyth shares her road to motherhood with a journal she wrote when, after seven years of trying to conceive, she first fell pregnant back in 2018. Spoiler alert: her son has just turned three. Her story is full of hope, love and compassion – and we could all do with more of that in our lives...

For the last two years [my business] bon has been my baby. I’ve devoted all my time and energy to it and it’s growing beautifully. Behind the scenes, and for the last seven years, my husband and I have been trying for another kind of baby – the human kind. Like so many other couples we’ve been on the IVF bandwagon of highs and lows. Countless rounds, countless fails, four pregnancies and four miscarriages. In December last year, it was finally our turn. We had a positive result and the pregnancy looked really good. I started feeling beautifully tired and nauseous and we were quietly hopeful this would be the one.

We were so excited for our week seven scan, and then shocked to learn our little bean’s heartbeat was frighteningly low, with a 2% chance of viable pregnancy. It didn’t make sense, I was feeling pregnant like I hadn’t felt before, and we just sensed this was the one. We were booked in for a follow-up scan a week later and I had seven days to reconcile the development. By day seven, I’d made peace with it and was determined to try again. I told my husband he didn’t need to come with me. We’d been down this road many times before, I could cope.

I had a different sonographer this time and was absolutely astonished when she saw a perfect little eight-week-old foetus with a perfect little heartbeat. It turns out the 1st sonographer had measured the heartbeat incorrectly. WTF. I knew my husband was in a meeting, so I sent him a message – the best text I’ve ever sent him and went back to work with a giant spring in my step. Later that night, he came home with a giant smile on his face. It was awesome.

The pregnancy continued well – I was nauseous 24/7 and tired like I’d never felt tired before – it made me feel amazing. Being pregnant is an absolute privilege. Physically it’s astonishing. This tiny little being knows exactly what to do and works so perfectly in sync with my own body. It really is a miracle. I felt like a real woman for the first time in my life, and also found I connected with other women more easily and on a deeper level. It’s an incredibly bonding experience for women to go through and that’s a huge bonus I hadn’t anticipated. I love it.

“ I knew my husband was in a meeting, so I sent him a message - the best text I've ever sent him and went back to work with a giant spring in my step. Later that night, he came home with a giant smile on his face. It was awesome ”

But after so long trying and with every previous pregnancy ending in miscarriage, I was pretty paranoid about this one. Even though I knew in my gut it was right, my head kept replaying bad scenarios. I saw a counselor and she really helped. I got out of my head and into my gut and felt incredibly connected to my now 15-week-old baby. Life as a pregnant woman was humming along.

At 17 weeks, I bumped into an acquaintance. She knew I was pregnant through a mutual friend. As soon as she saw me told me she dreamt about me the night before and warned me that my baby was in desperate need of certain foods. She said it with such conviction and foreboding I literally ran to the nearest cafe and bought a giant breakfast (my second breakfast that morning, I’d already eaten). In the space of that short conversation, my baby bubble exploded and all my quiet confidence evaporated.

I know it came from a good place, but you can’t say that to a woman you haven’t seen in over 12 months, and whose diet you know zero about. I freaked out quietly for days until I burst into uncontrollable sobs over something totally trivial. In between tears, I told my husband, worried I had damaged our precious baby and was doing everything wrong. He set me straight, as did my mum, and my best friend. I calmed down and continued with my healthy, balanced, pregnancy-friendly diet. In hindsight, how would she know?! I’m a lean person and being nauseous 24/7 for the 1st 14 weeks meant my diet consisted largely of butter and vegemite on toast – the only thing I could keep down; so I had put on very little weight by then. Not that unusual for the first trimester. But as soon as I was able to eat without throwing up, I was following pregnancy eating guidelines to the letter – my god, I’d been waiting seven years for this (truth be told, 20 years), so the thought of doing anything that was not in the best interest of my developing child was simply outrageous. Her comments made me question everything though, she was so earnest and compelling, I really believed I had starved and damaged my baby – even though deep down I knew I hadn’t.

This was compounded by weird conversations with women I knew who took an unusually negative view on my pregnancy. Comments around how hard it would be (I may not have been a mum yet, but I don’t live in a vacuum – and you just cope!), how awful being pregnant is (it’s not), how much older than the average mum I was (I am, but I don’t want to be average!), and questioning how I would manage running my business at the same time as running my household and taking care of a newborn (f*&k me, it’s 2018. And let me just focus on growing my baby first!). My counselor helped a lot and for the next few weeks, I was pretty much able to stick to my strategy of staying positive and sending only good, calm energy to my baby.

Fast forward to 20 weeks and our big scan. Our growing baby was perfect but then the sonographer checked my cervix. Rather than a lovely solid 3-4cm wall of closed cervix keeping my baby safe and snug, mine was barely 1cm long. We didn’t appreciate the gravity of the situation until an hour later when we understood how close to labour I was, and the implications of a 20-week premature birth (it’s not a happy outcome). I was admitted to hospital in preparation for surgery the next morning. The shoot I had booked for that afternoon was cancelled and my husband cleared his calendar for the day to be with me.

Saturday morning was confronting. A general anesthetic is not an option when you’re 20 weeks pregnant. I had a spinal tap to numb the lower half of my body but other than that was completely alert. Alert enough to note the delivery table at the foot of my surgery bed and the tiny nappy and instruments which lay on it. To be used in case of emergency.

I closed my eyes and took myself to Byron Bay. Swimming and playing in the ocean with my beautiful smiling husband, my absolute happiest place. I spoke to my baby the whole way through and practiced the breathing technique I’d learned, blissfully unaware of what lay ahead, in my antenatal yoga class the week before.

My obstetrician is a legend and the operation went really well. My nurse in recovery was wonderful and while the feeling came back to my lower body we chatted about coffee groups and the friendships formed there. Four days later I left the hospital, confined to bed rest for the next seven days and home (as much as possible) rest until at least 28 weeks. Once you’ve reached 28 weeks gestation your baby has a much greater chance of healthy survival.

I’m now 24 weeks pregnant and in 2 days we have another scan to check the success of the surgery and the health of our baby. I can feel him kick as I type – he’s a pretty strong little guy, but it’s hard not to worry.

Our immediate goal is to get to 28 weeks but secretly (or not so secretly now) I’m aiming for 34. And, if I do get to 34, why not just go the whole way!? We take each day at a time and our network of friends and family has been amazing. It’s amazing the perspective and clarity you get from a life curveball. To anyone who’s having a tough time with pregnancy, or anything really – just follow your gut. I’ve learned so much through this process and one thing it’s consistently shown me is that only your gut knows. Trust your own instincts. Listen to what your gut is telling you
and always, always, do what’s right for you. And one last thing – never crumble at life’s challenges, because there’s always a pot of gold at the bottom.

Update 1
The day after this I was admitted back to the hospital for bed rest. I’ll keep you all updated with my adventure!

Update 2
I’m a mum! And I love it so much. I ended up being induced at 39 weeks. We did have one more obstacle to overcome at birth, but we overcame it and that’s for another day. For now, I’m prepping for a lockdown third birthday and our son is just so wonderful that I’m teary again. I’m the luckiest woman alive. IVF is a bumpy road. But the bruises you get along the way fade once you have that baby in your arms. And by the time he’s a toddler, you’ll look back at that rollercoaster and be so grateful that science enabled it and you had the strength to ride it.