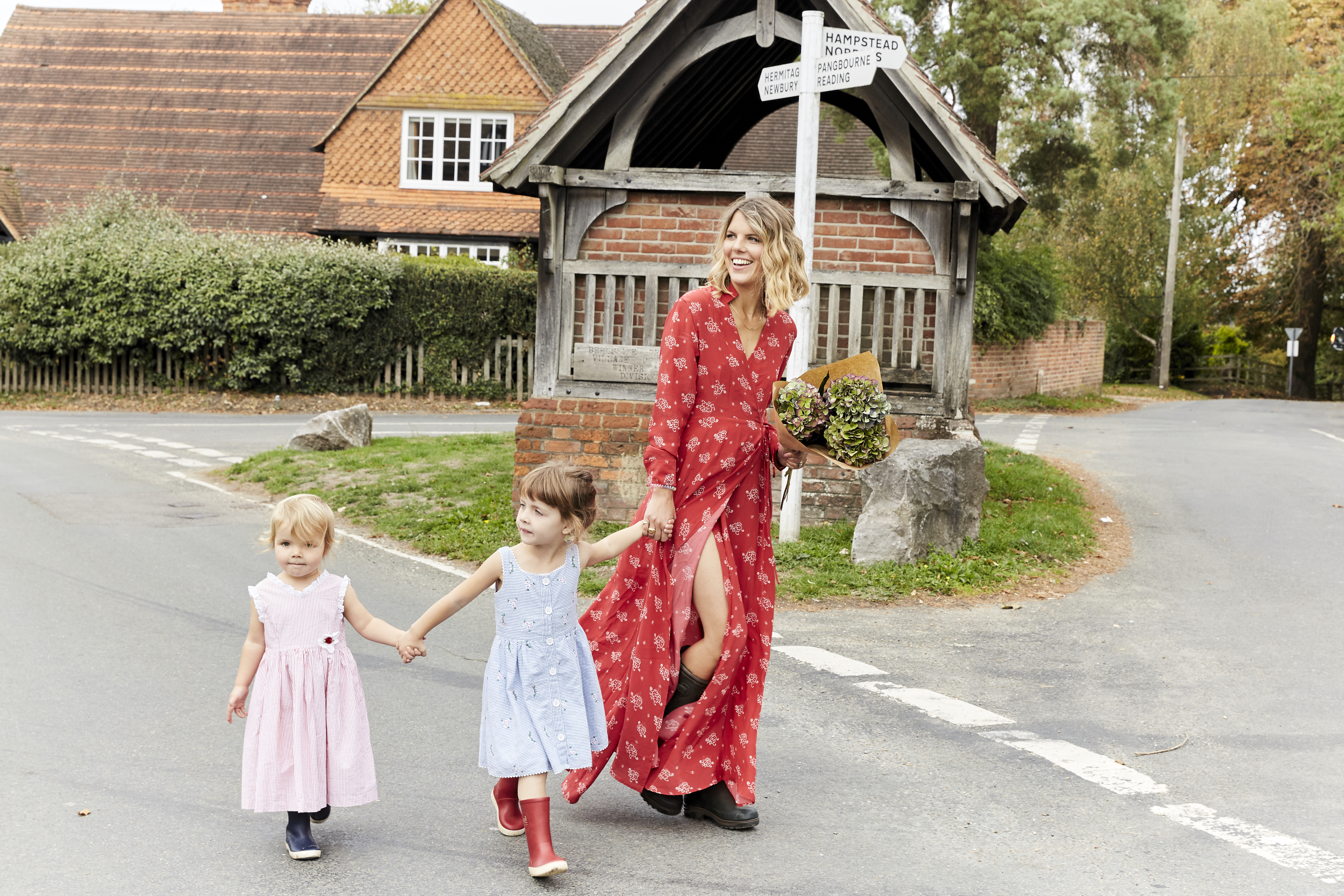 Our newest columnist, the wonderful Ginnie Chadwyck-Healey, shares her thoughts on this role we call motherhood. You know the one - the job requiring (greater than) full-time hours and absolutely no pay.

Ginnie says, “Why do we beat ourselves up and differentiate between those mothers who ‘work’ and those who don’t? Live within your means, take joy from the simple things and be proud of the mother you are.” Here here, Ginnie. Words: Ginnie Chadwyck-Healey Image: Helene Sandburg

‘A mother’s work is never done’… So the saying goes, and after the chaos and tantrums of Christmas, I’m sure you are all thinking ‘And that was meant to be a ‘holiday?!’.

As we enter the new year with all the self-imposed restrictions and resolutions I can’t help but wonder how many mothers are also considering their approach to work. A new job, the impending return from maternity leave, the search for the next step up the career ladder, the aim to set up a business, or the ‘give it one last shot’ in the job that you detest.…

In December, the writer and fashion consultant Pandora Sykes caused a stir on social media with her brilliant and direct poem, ‘An Ode to (her nanny) Mimi’.

She introduced it with ‘A lot of women work hard and can’t afford a nanny; I’m lucky that working at my full capacity means I can. Mimi helped me put myself back together.’ I admired Pandora for addressing the fact that many women cannot afford to go back to work. My point here is, that’s okay.  It’s okay to ‘just’ be a mother. Not demeaning, nothing to be ashamed of. The very act of being a Mother (yes that is a capital M) is the most underrated and least remunerated ‘work’ in the world. We just need to remember it is also a job that many many women long for but will never manage to have.

I can remember my own sister in law once being asked ‘So what do you do?’ at a lunch, and I heard her say ‘Oh I’m just a mum’. It was as if she thought that the (male) recipient of the reply would instantly think that wasn’t enough. There was a defensive, ‘I’m going to undermine myself before you do’, tone to her reply. I interjected: ‘You do realise that is the hardest job in the world?’ but she seemed to convey the role of a ‘Mum’ as second-rate, telling herself that anyone who went into an office to do a job was somehow better than her because they brought in some kind of financial reward. (I have since berated her!)

Many women who work don’t realise it is a luxury. With childcare taking up at least a third of the average income, many mothers really really cannot afford to go back to work.

Mothers I know who earn six figure salaries complain how tired they are and how out of kilter their work-life balance. Well let’s be honest here, I’m afraid if we are going to fight for women to have their place at the top, and ensure any kind of gender pay gap dissipates (even just a little), then we need you women to keep going. If you are reading this as a higher rate tax payer then I’m also guessing you actually like your job, just a little, even if you hate that it takes you away from your children or the school gate catch ups. It’s okay to like the fact that you work! One mother I interviewed for this piece had chosen to give up work and guess what she learnt? By being at home each evening as her daughter tackled her homework, she noticed significant learning difficulties and behaviour (which had been overlooked by the school). ‘If I had been working full time, which involved many evenings, I would absolutely not have noticed anywhere near as quickly that my child was struggling, as she was naturally bright and articulate. Being with her full time meant I spotted issues and was able to approach the school with absolute confidence that what I had noticed was her struggling rather than me just being difficult… Now with the right tools in place she is in the top 10% of her class. I don’t regret giving up work. It’s the best decision I made.’ There is a pride in this response that we rarely get to hear from non-working mothers. Another mother told me how she was judged for not having a job when she was at the school-gate. It was immediately assumed her husband brought home enough income to warrant her not having to work. ‘They thought I just got my nails done and went to yoga, and they genuinely cut me off at the school gate’. There is a division that seems to arise between those who do (work) and those who don’t.  We are all guilty of this.  We need to take pride in whatever we do, and how much time we canspend with our children rather than the amount of time we can’t.

I was brought up by a mother who didn’t work in an office. She gave her three children (and my father) the love and attention, nurture and direction I only hope I can give mine as they grow and develop.

That doesn’t mean I didn’t see my mother hard at work. Instead she gave her time to charity, and to the local community- and then my grandparents fell ill and that created another element of work for her. All unpaid, but done with passion and energy, and every kind of work she did created real results. She installed in me the ability to talk to anyone and to approach charity work with all the fight and vigour of a ‘normal’ job. That’s as good a lesson to a child as any. So many women say ‘I think it’s very important for my children to see that I work’ but my point here is you work every single day of your life even if it’s always at home, sorting washing and putting away school bags. Don’t ever underestimate that, just because it is seemingly mundane or not remunerated. The pressure to find a husband or partner, have a career, fit a few pregnancies, births and maternity leaves in, then find the right childcare, pay for that, oh and then climb the career ladder is a new norm of today. It’s how you approach that pressure that differentiates us all. Personally, I now know I am a happier person because I see my children more. The guilt of not seeing them enough never goes away (I can sometimes hear my youngest crying when I am just a room away because I work from home) but I also took back control of my life when I left 9-5 employment at Vogue . Of course I don’t earn a six figure salary, I never did and I don’t think I ever will, but I’m happy with that. (And by the way nor does my husband – because that is always the assumption, again see Pandora’s poem if you haven’t already).  The point is we, as a family, live within our means. We enjoy life but we don’t go crazy. We realise when we have to say no, and we are fine with that. We know what’s important and what’s just  plain ridiculous. We recognise that as you earn more, so your aspirations and spending patterns grow; the better school, the bigger house, the swankier handbag, the fancier car. But ultimately at the end of the month we all feel the pinch – however crazy that might seem to someone who is genuinely at the lower end of the earning spectrum.

Mostly, my mind has been struck by a friend who’s daughter was diagnosed with leukaemia just before Christmas.

She is living every parent’s worst nightmare. She is tired, she is in shock, she is scared, she is rarely with her husband because someone needs to look after their other children, she is quite frankly an inspiration to anyone who knows her. I say this because it is quite clear she will have to give up her job for the foreseeable future. This will bring a new financial pressure she will have to navigate.  Ultimately, our children come first and having a child who is unwell is the biggest proof of that.  Her ‘work’ will entirely be devoted to her family for as long as it takes, until she can reintroduce her clients back into her life.  We would all do the same if we were in that position. And that’s the sacrifice you make when you become a parent. Motherhood is a total Rubix Cube, the pieces rarely fit seamlessly, but often, simply being a mother who cares for her children is the most important path to choose.  We often forget that simply because we live in a society where there is a pressure to have an identity other than motherhood; we also have to have a career or to be entrepreneurial, we feel we need to be ‘liked’ by social media, not just by our friends, we feel we should have holidays or we should wear a certain brand. Turn down that noise for now (I’m just as guilty as you by the way).

If you make just one resolution this year, it should be to allow yourself sacred time to be with your children; whatever you can realistically fit in and wholeheartedly relish.

It might be a day a month, a few hours at a weekend, anything, so that you can enjoy and grow in the most significant job on your entire CV, being a mother.