The Tale Of Louella Tuckey 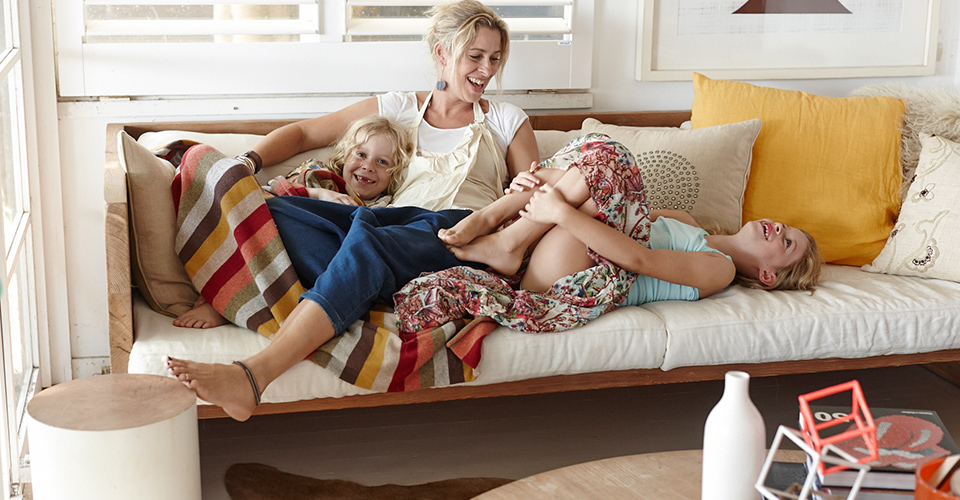 If you were asked to picture your dream home, it’s possible you might imagine something like this. Paradise. Perfection. Heaven. Bliss. The Tuckey home is all of the above and more, not to mention an extraordinary place to raise two young children. Of course, mother, stylist and designer Louella Tuckey is as creative as they come. Her home, which she shares with her husband Mark and two girls, Chilli, eight, and Indigo, six, is brimming with a perfectly curated miscellany of objects, art and furniture, which is all so artfully thrown together, that it could only be designed by someone whose imagination is as vivid as hers.

Theres also the mind-blowing location. Situated on Sydneys Northern Beaches, its right on Clareville beach. As in, step outside the front gate and your feet instantly hit the sand, a minute later youre in the ocean. There are even ducks  Isla and Lisla  in the garden, a swimming pool with a long slippery slide and an idyllic view of boats bobbing up and down on the sparkling blue water. Its also wonderfully homely, warm and inviting.

Mark and Louella are behind Mark Tuckey, a bespoke Australian furniture and interior company who make solid timber furniture from recycled timber and sustainably managed forestry sources. They’re the dream team: he founded the company 25 years ago and focuses on all aspects of it, while she focuses specifically on the design and the look and feel of the business. Within the collection is the covetable MT Junior range for children, which theyre looking to expand in the future.

Tuckey became a mother for the first time eight years ago. I was 36 when I met Tuckey, she recalls. Id been married, Id been through a few less than perfect relationships and Id just decided that I was never going to meet that right person that Id have a family with. Id let go. And then bingo, it was on. Two beautiful children later and she hasnt looked back. Motherhood has taught me that its SO much harder than I thought it would be, but SO much more rewarding and full of love than I could have ever imagined. That motherhood involves being very organised if you want to achieve anything. That your children become this shining light in your life that you cant take your eyes off. That almost every conversation with their father (when its not work talk) is about them and only them. That they become your reason for being even when your life is so full of so many other beautiful elements, she says.

Originally from England, Tuckey initially settled in Melbourne. Five years ago, she and her husband moved to Sydney to bring their children up by the beach. We still pinch ourselves, we feel grateful every day that we live where we do. Its not a big house, but its a friendly house with masses of character, says Tuckey.

Like a lot of artistic types, work is her creative outlet. “Im a much better mother when Im being busy and creative, than when Im just being a mother, which took me by surprise. I thought Id be this mother earth super chilled mum who just loved hanging out with the kids and being at home, she says. When she moved to Sydney, Chilli was two and Indi was six months old. Without her support network, she couldnt work. I went MAD. I found it really challenging, harder than any job Id ever done and Ive had jobs with extreme stress, super tight deadlines and difficult clients! Things looked up when I gave in and found a nanny, just to be there when the girls were sleeping, so I could work without feeling the guilt of missing out on time with them. Tuckey says it has taken almost seven years to get to a point where she doesnt feel guilty. I realise how much better I am working and feeling fulfilled, and I now absorb myself in the beautiful quality time I have with them après work.

Louellas little list of loves:
Sticky chai tea from Harvest in Newport  Im addicted to it and its all Jo Yeldhams fault!
Elle Decoration’s large format quarterly  soooo divine, full bleed images from the best of the shoots in their normal publications.
Our great big farmhouse refectory table in American oak  I want one at home so badly, but its just too big (on the list to go home when we renovate).
Running the headland in Newport followed by a swim  it makes me feel alive, its why we live here.
My little Citroën 2CV car. Tuckey bought it for me as a surprise two Christmases ago, after Id gone on and on about it for months.
Our ducks Isla and Lisla. They make me laugh and theyre soooo chatty. I do love the dogs a lot too, Scribble and Lily.
My new very baggy pants from Bassike in indigo fleece denim, theyre awesome and Im living in them.
Swimming at the ocean beach with Tuckey and the girls now theyre old enough to handle the surf. Heaven.
I really, really love home.