The Tale of Megan Hess 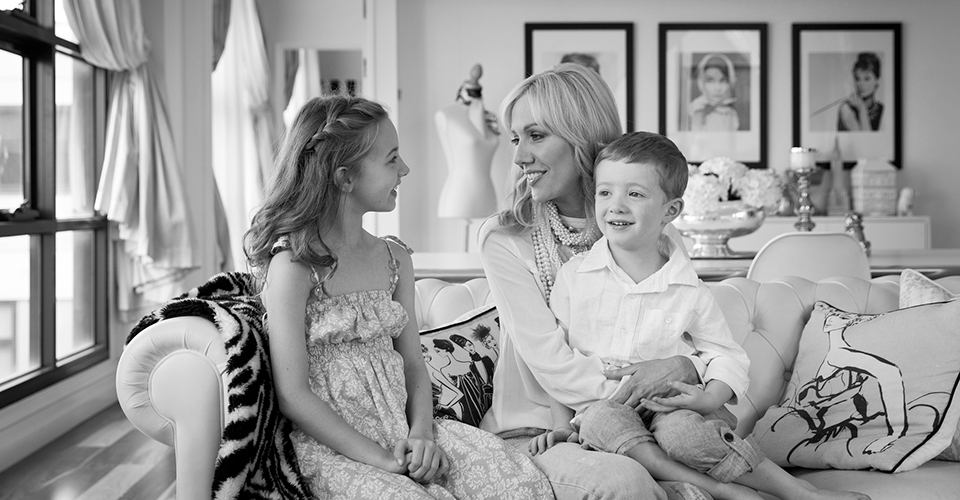 Megan Hess still remembers the first time she held her daughter Gwyn. It was like life was frozen in time and all I could hear was her little breathing. It was the most beautiful moment that Id ever felt, she lovingly reminisces over that moment that every mother can relate to. Her baby girl is now eight, and she also has a son, Will, four (incredibly her children were both born on the same day, at exactly the same time, four years apart).
The elegant Melbourne-based blonde is one of Australias most stylish  not to mention busy  women. A world-renowned fashion illustrator, shes warm, uplifting and also refreshingly down-to-earth for someone who flies around the world working with clients such as Tiffany & Co. and Chanel.
Hess lives in the roof of a converted 18th century church in Port Melbourne with her architect husband, Craig Yelland, and their two children. The chic, sprawling space is filled with all the things the couple have collected over the years from their travels. Theres also lots of my artwork, the pieces that are special to me. We wanted our home to feel elegant and chic, but also be tough. We wanted the kids to be kids and run free through the house, she says.
Her career-defining moment happened back in 2006. Hess got a call in the middle of the night from author Candace Bushnells publisher asking if she would illustrate her next novel One Fifth Avenue. Bushnell loved the cover so much that she was asked to illustrate all her previous books including the cover of Sex and The City. Once Sex and the City was released, I was contacted by TIME magazine in New York to create portraits for them. This was a dream come true and I still cant believe I work for them. From there, Hess began illustrating for clients such as Tiffany & Co, Chanel, Dior, Cartier, Vanity Fair, Italian Vogue, Bergdorf Goodman and Laduree. Ironically at the same time as my work finally took off, I had my first baby. Its funny, I always tell people that I havent really slept since 2006.
Shes since expanded into everything from books to homewares and has just launched a range of hand-tufted and intricately carved wool rugs called The Vintage Jewels Collection. The most exciting project for me right now is my first rug collection with Designer Rugs. Ive been obsessed with their beautiful rugs over the years, so it was such an honour to design a collection with them. And it was such a different design process to create for the floor rather than the walls. The collection is called The Vintage Jewels and it just launched.

On juggling motherhood with work, Hess says: Its not easy. Ive come to realise that striving for everything to go perfectly well all the time is unrealistic. Some days all goes very smoothly and I feel like Ive conquered the universe because my family are happy and Ive done well with my work. Other days, someone gets sick and its all out the window. I just take it one day at a time. Luckily, her darling daughter also helps to keep things in check. Sometimes she looks at me when Im trying to do 100 things at once and says Mum, calm down, do you need my help? Theres also those three little words that every mother loves to hear. When they look you in the eyes and say I love you Mum, I literally almost pass out with joy. There’s no greater feeling than the love that you share with them.

Megans little list of loves:
Anything thats salted caramel.
Tropical holidays.
Tome.
Peeky Me (the most awesome craft for kids).
Chanel jewellery.
Downton Abbey.
The Dolce & Gabbana spring/summer 2014 collection.
Cuddling Will (my four year old in bed each morning)
The incredible work of the team behind the Ovarian Cancer Research Foundation.
Date night with my husband.