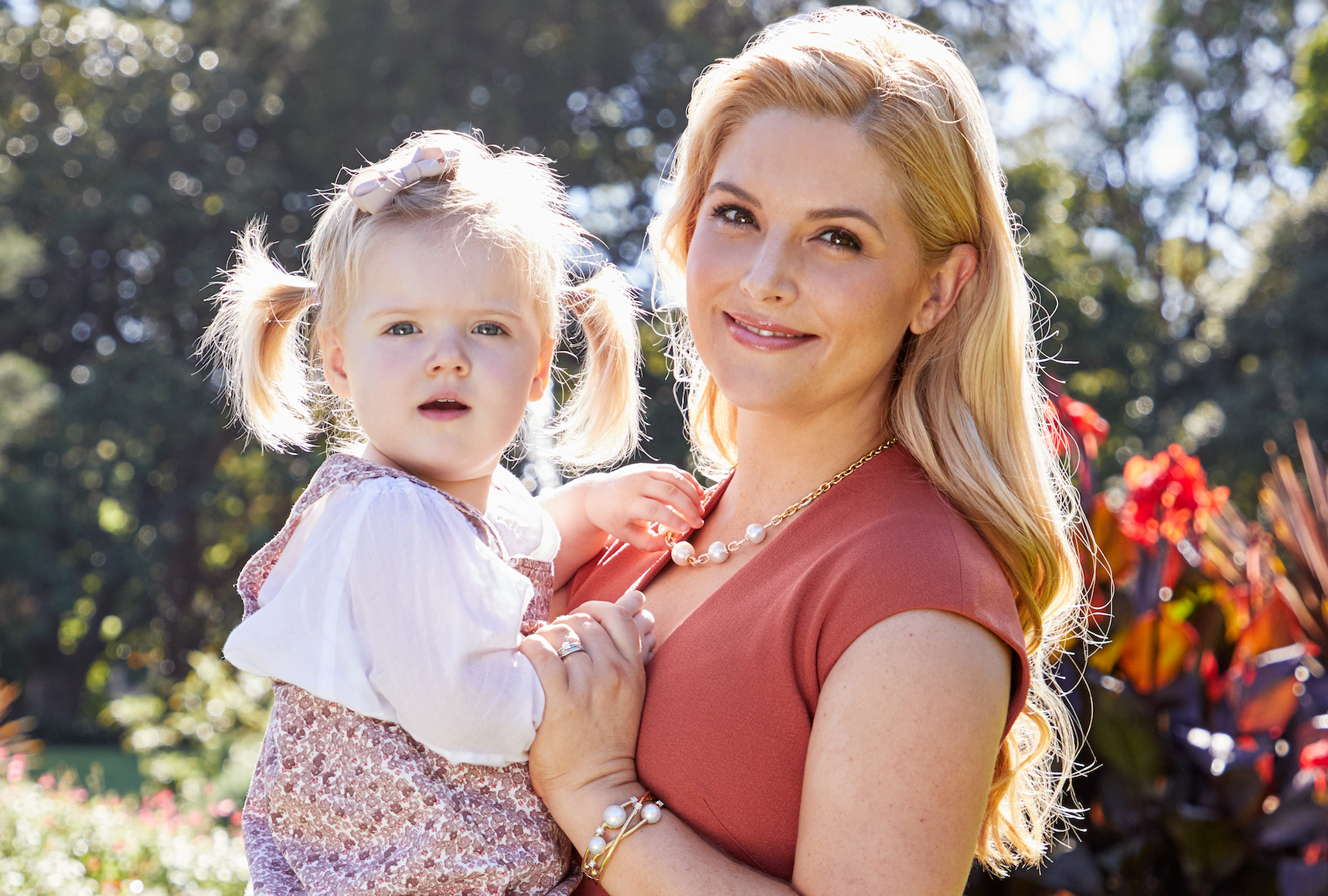 Perth-born stage and screen star and Kailis Jewellery ambassador Lucy Durack has an infectious smile and bubbly personality. Both of which she’s passed onto her 22-month-old daughter Polly, who has also inherited her mother’s warm, friendly personality...

Together, they make quite the pair. “When Polly was only a few weeks old, I spilt an entire session’s expressed breast milk (aka liquid gold) all over a beautiful black ball gown I was wearing. I was about to sing at an important event and I had no time to change, so patted it down and went out on stage and did the gig. No one seemed to notice! So one of the most important things that motherhood has taught me is the importance of dark coloured clothing,” she says, laughing. Another great quality of Durack’s? She’s fantastically honest. As one of Australia’s most exciting leading ladies of stage and screen, you’ll know Durack for playing Glinda in the Australian production of Wicked. Or Elle Woods in the Australian production of Legally Blonde: The Musical (she won both a Sydney Theatre and Helpmann Award for this role). She’s regularly in concert throughout Australia – she sung the British and Australian national anthems for Queen Elizabeth II. Her radio show My Soundtrack has been the ABC’s most downloaded radio show for three summers running and is back for a fourth season this year. She’s also about to start filming a new series called Sisters by the creators of Network Ten’s Offspring. Did someone say #superstar? Yet despite her tremendous career success, motherhood continues to teach her the most about life. “As a mother, I feel like I have so much ahead of me to learn. Just when I feel like I’m getting a handle on one phase, all the rules change again. I hope I am learning to let things go a bit more and be less of a control freak. I want to let myself enjoy the good times more,” she says. Again, there’s that honest, open nature. For Mother’s Day, she’d love a handmade card (“last year I got my first handmade Mother’s Day card and it was honestly in my top five presents of all time”) or there’s always jewels, of course. “Growing up in the 80s, I have always loved bracelets and bangles. I also don’t leave the house without putting a pair of earrings on. I love my Kailis pearl earrings as you can wear them as casually as you like, or if you’re going somewhere glamorous they translate so beautifully as well.” Ahead of Mother’s Day next month, we sat down with the beautiful blonde star to talk motherhood, jewellery, and what’s in store this year for Durack… Photographer: Michelle Holden | Hair and makeup: Andrea Black | Styling and story: Georgie Abay | Kailis jewellery worn throughout

“ My single most favourite moment as a mum so far happened earlier this week. Polly and I were right up in each others faces playing after her bath... she cupped my face in her little hands and looked in my eyes and said 'ruf you' ” 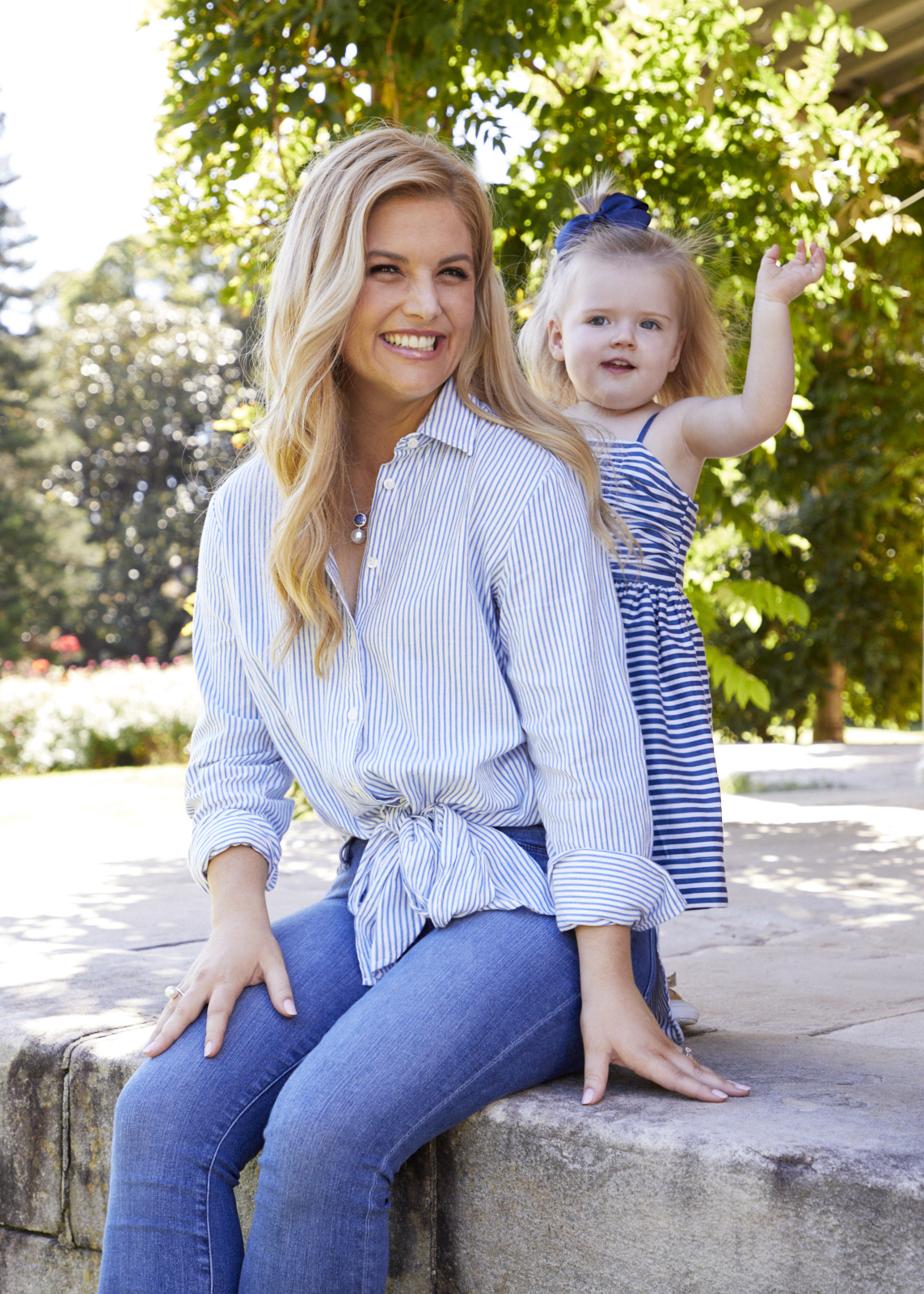 How would you describe yourself in three words?

How will you be spending Mother’s Day?

Good question, I’m not sure yet, but definitely on Facetime at least with my mum and grandma, and in person with my husband Chris and my daughter Polly, who I hope has been practicing pancake making in her spare time.

Tell us about your own mother…

My mum set the bar WAY too high. Mum is the sort of person who people befriend on planes and want to catch up with her for coffee weeks after the flight has landed. Mum has instilled in my sisters and I the idea that we should follow our dreams and work hard towards them. She is smart, kind and a lot of fun. She will always help you justify a shopping purchase you feel guilty about, always makes you feel like things are going to be ok and is my whole extended family’s rock. As you can imagine, she was also destined to be a rock star of a grandma, which is what she now is too.

What has been the most challenging part of motherhood?

I realised motherhood would be a challenging, full time job, but I didn’t realise how challenging! I was fairly naïve about the basics such as my baby eating and sleeping. Polly found both a bit tricky and this left me feeling very emotional. I felt like a failure. Existing without sleep for many, many months was one of the hardest parts of my life so far.

What’s your approach to health and wellbeing?

My gym has a wonderful crèche and I like the routine of exercising for my mental health as much as for my physical health. I sort of have to trick myself into exercise though, so fortunately they have some great classes and inspiring teachers that help me do that. I love sweets and am in the process of reigning myself in from the Christmas festival that I accidentally let continue well into March.

Describe how you feel when you’re on stage…

I feel happy, comfy, peaceful, often a bit nervous, sort of on edge with anticipation, joy and excitement.

What has been your favourite production to work on?

I have LOVED so many. Highlights have been Wicked as well as Legally Blonde, which was a challenging joy. 42nd Street will also always have a very special place in my heart, the original Australian cast recording was the first CD I bought with my own money back when I was a little girl. When I was cast as Peggy Sawyer, I worked pretty much every day for a year in the lead up. I needed to get my fairly average tap dancing up to scratch! I think I managed to just pull it off, which was tremendously satisfying and the day after we closed, I got together with my now husband Chris, who, by the way is a magical tap dancer. 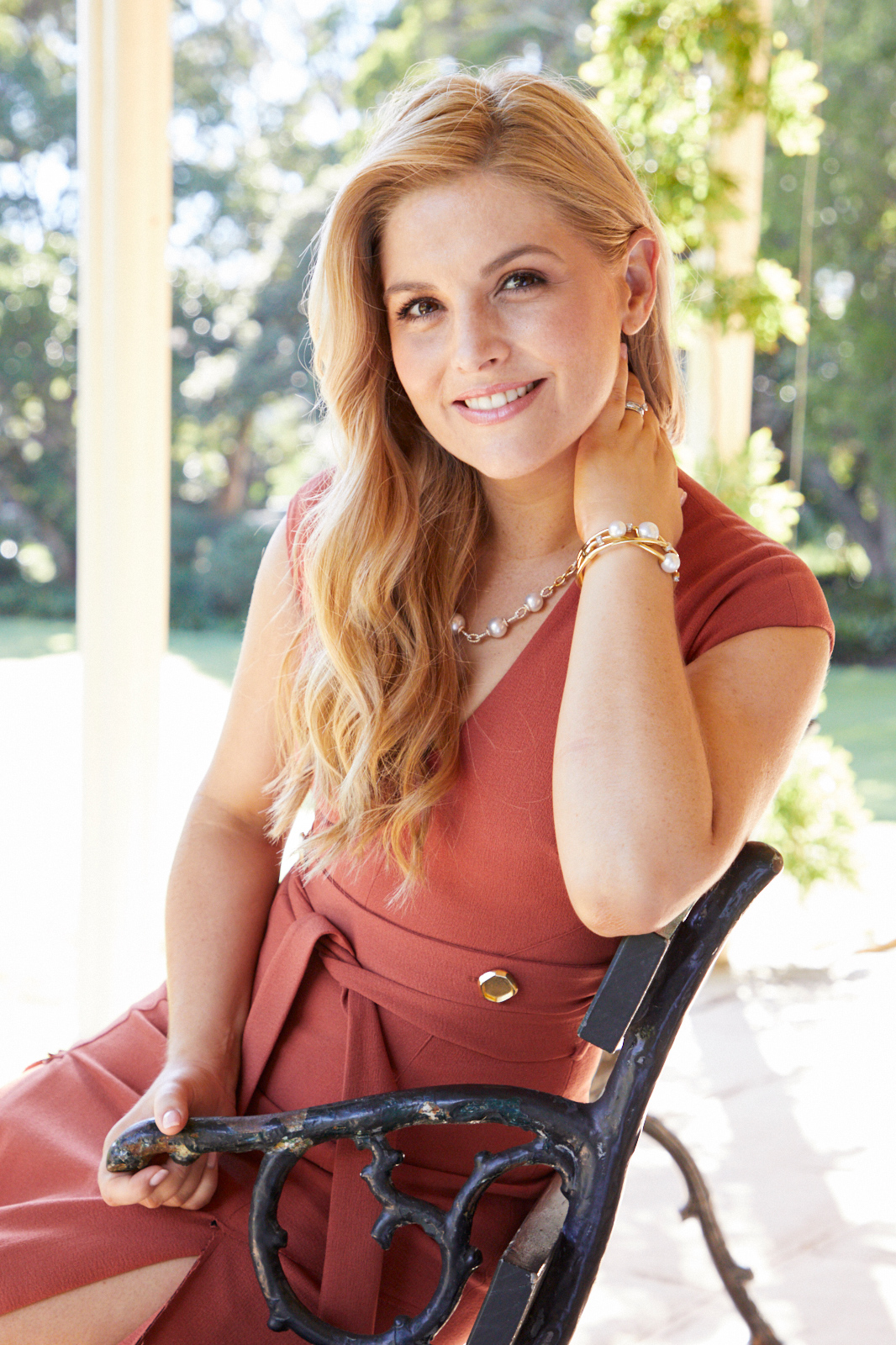 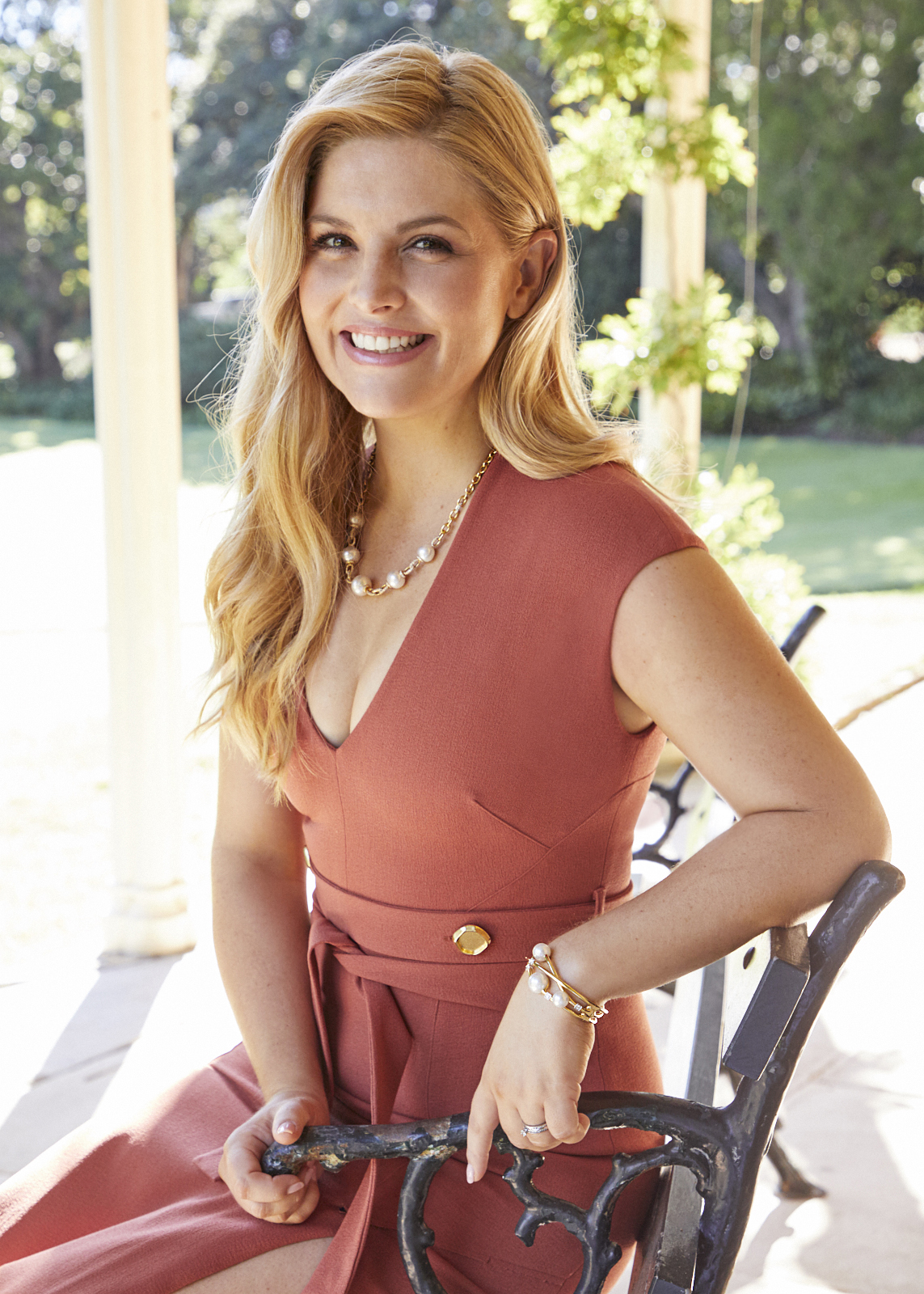 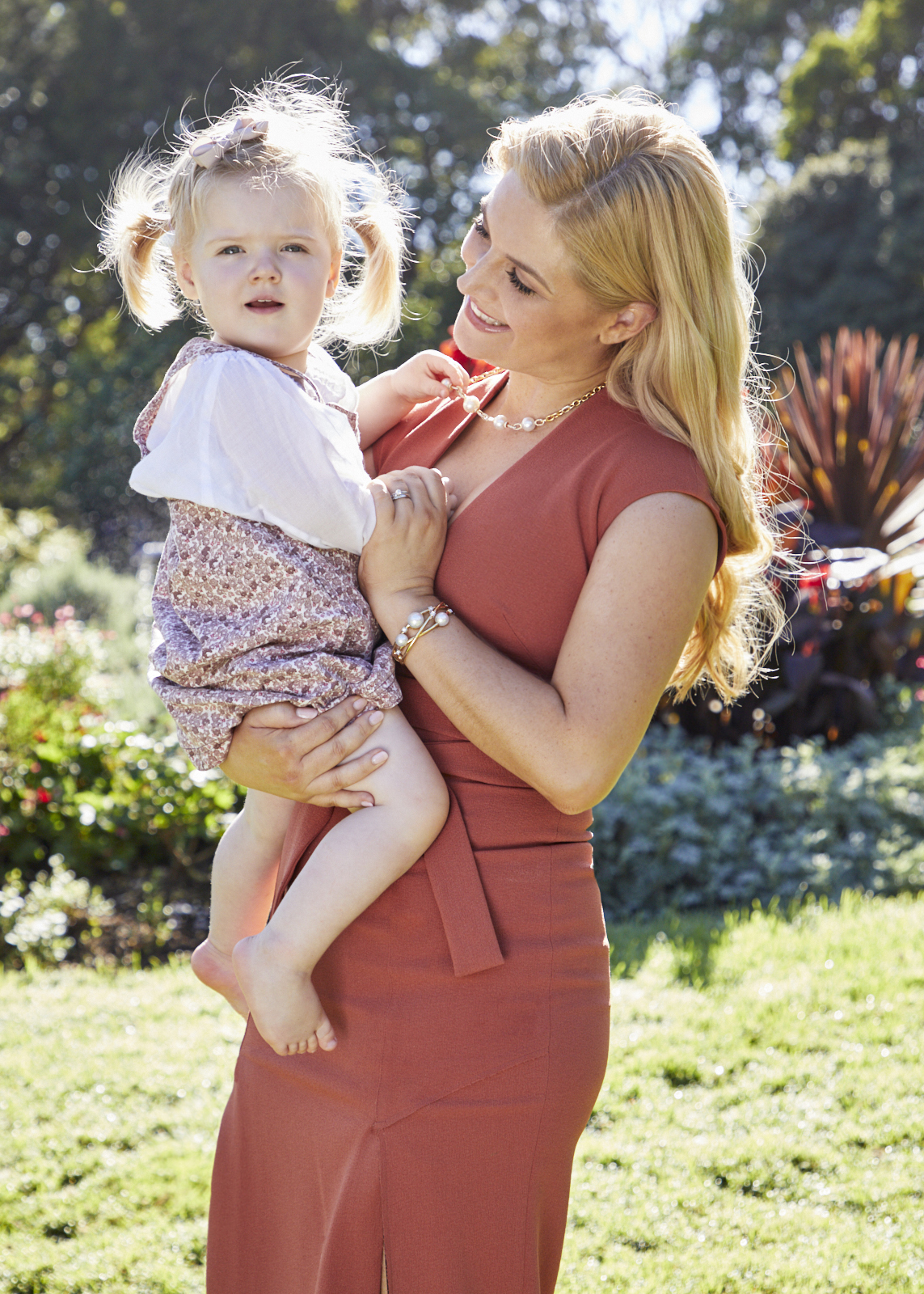 What does the year ahead hold for you?

Polly turns two in June, so lots of fun and new times for Chris and I with her. We have a few family trips planned including one celebrating my dad’s 60th, which I’m really looking forward to. I’m currently recording my 5th season of a radio show I host for ABC radio called My Soundtrack and am about to start filming a little of season 2 of Doctor Doctor for Channel 9 and another new TV show that hasn’t been announced yet. Then Sisters for Network 10, as well as a couple of other projects that I am excited about but also haven’t been announced just yet. I am also really hoping to get Polly to eat healthier food. I have bought Jessica Seinfeld’s book Deceptively Delicious and have high hopes for her clever recipes where she hides vegetables in nuggets.

What are some vivid memories of your childhood?

I grew up in City Beach, which is a suburb in Perth. I spent my whole childhood in the same house with my mum, dad and two sisters whom I am very close to and for a large part of our time growing up, we had four aunts, three uncles, eight cousins, our nanna, grandma and grandad all living in walking distance of our house. It was pretty idyllic. I was very interested in drama from a young age and the head of music and head of drama at my school (John XXIII College). Toni Strong and George Tsakisiris were/are amazing and passionate teachers of the arts and greatly inspired me towards the career I have today. I did every musical theatre and drama elective I could, and Mr Tsakisiris even let me do one drama elective twice so I didn’t have to go a term without theatre in my life.

What’s your approach to wearing jewellery?

If I am singing on stage somewhere special like for Carols by Candlelight or with a symphony orchestra, I have a really amazing Kailis diamond and pearl necklace that I love to wear. I have been a Kailis jewellery ambassador for a couple of years and I love not only their beautiful, classic yet modern designs, but everyone I have met who works in the Kailis ‘family’. They’re all such lovely and graceful people, which makes me love the jewellery even more.

How would you describe your approach to parenting?

Sometimes I am strict and sometimes relaxed. I am trying to set up boundaries with Polly as she is very awesome and funny and loving, but also pretty spirited. I have had a few of “those moments you hope your child’s sass will help her lead a company and not a gang in prison.”

Did you enjoy pregnancy?

To be honest, apart from being excited about having a child with the love of my life, which was (and is) mind blowing and thrilling and fills me with love, pregnancy and I did not really gel. I had gestational diabetes, carpal tunnel syndrome and bad morning sickness everyday of my pregnancy. During the first five months of my pregnancy, I was still on stage eight times a week playing Glinda in Wicked. I worked out pretty quickly that there were seven little offstage breaks during the show where I could run away and be sick and sometimes I used all seven. I ended up in hospital for a spell with hyperemesis (the same as what Kate Middleton had), where I was being sick every 20 minutes, but once that happened they gave me some stronger medication and I went back to work. Very fortunately for me I had this angel Teresa who was my dresser and she had been really sick during her pregnancies. She was so extremely kind and totally saved me, she was a gift from the universe.