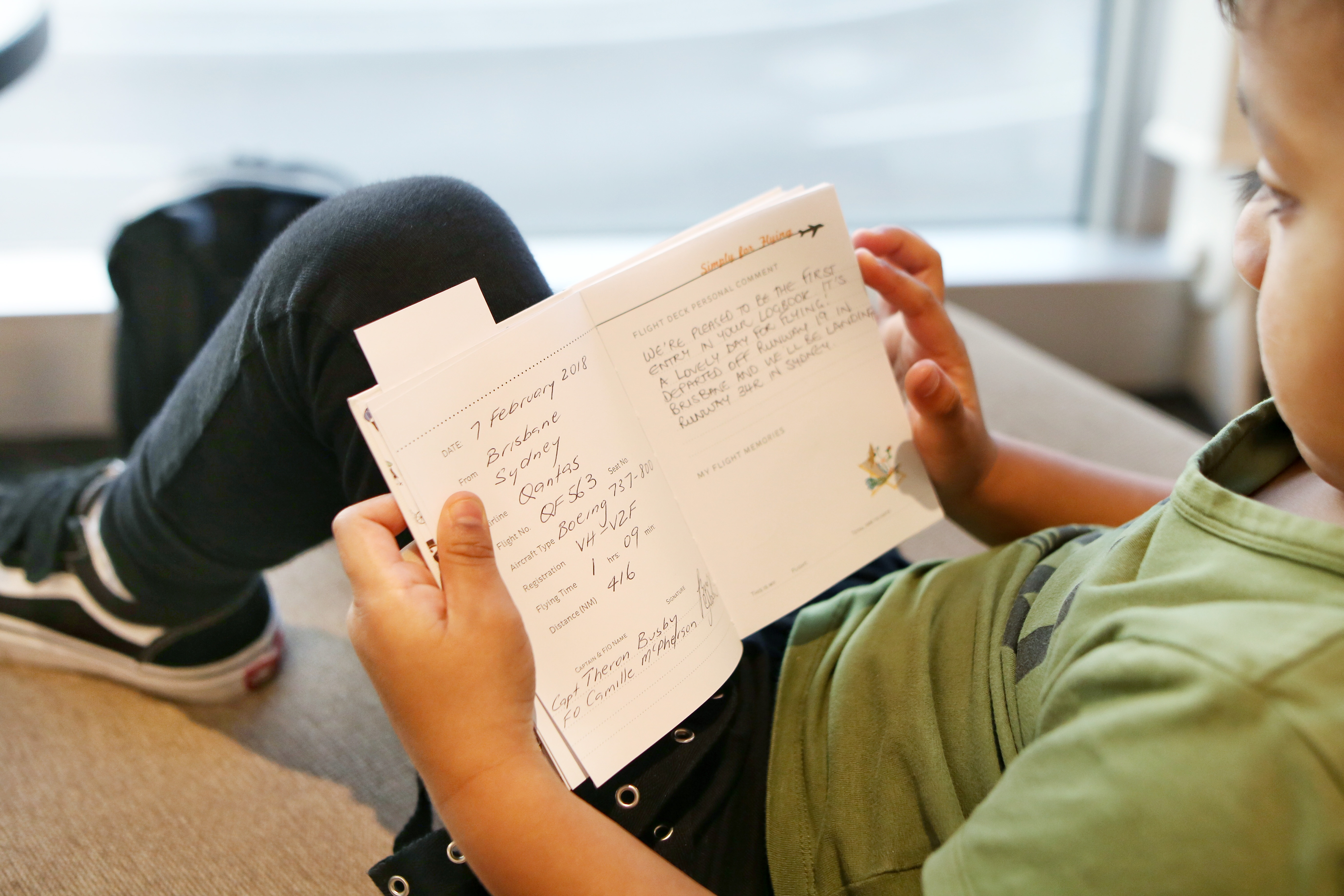 Late last year, I took my two sons on a trip that involved over 24 hours of flying (each way). Yes, I'm still tired.

While my youngest decided to while away the time by running up and down the aisles, my 5-year-old powered through activities, proving once and for all that screen time holds no appeal when you truly invite them to succumb to it. It was about 13 minutes into the flight (when we had not yet even taken off) that I thanked the team at Simply For Flying for creating a genius product that proved to keep Isaac occupied for a good chunk of our travel time. Created by Zurich-based Australian mum of three, Bronwyn Darnoc, Simply For Flying was born out of Bronwyn’s own memories of flying adventures and the records she kept in her very own flight logbook. Searching for a similar product when she had her first (of three) children without any luck, she decided – like so many entrepreneurial mothers do – to simply make it herself. A timeless keepsake that is made up of questionnaires and activities, Simply For Flying’s logbooks encourage children to create memories of their flying experiences, with the help of the captain and crew. It’s not only a brilliant way to pass the time on the flight while generating excitement, but creates a beautiful memory for years to come. We spoke to Bronwyn about Simply For Flying, including what it’s taken to launch the brand, through to her tips for travelling with children (as you’ll see, she’s well equipped to give advice – with three children born in three different countries!).

Simply for Flying can be shipped globally from Europe, and is also available through distributors & retailers worldwide. The team have also kindly extended a 15% discount to all readers. Simply use “THEGRACETALES” at checkout. Shop Simply For Flying. 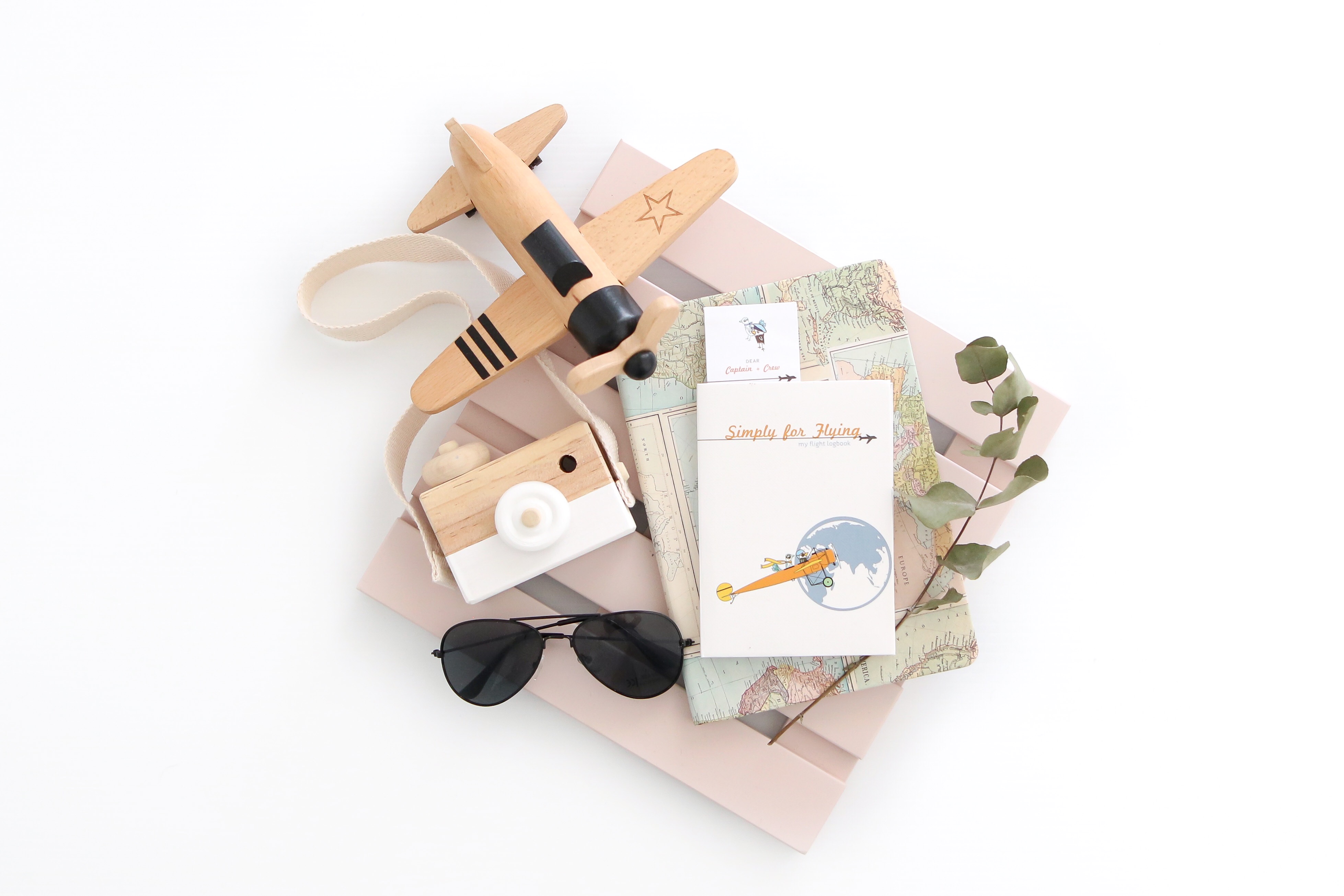 What prompted the launch of Simply for Flying?

It was 2008 when we left Melbourne with our then 8-month-old son Luca and relocated to Germany. This was his first international trip and I wanted to document it the same way my parents had for me in a flight logbook. I tried to source the same flight logbook but the airline had stopped making them so I had to resort to a professional flight logbook which was quite boring, heavy and bulky looking. It wasn’t until a couple of years later when I tried to source further logbooks I noticed there still weren’t any products on the market that I liked. I pretty much created the flight logbook out of sheer necessity. The intention was actually just to create something for my own children but I quickly realised that others might benefit from my design as well. 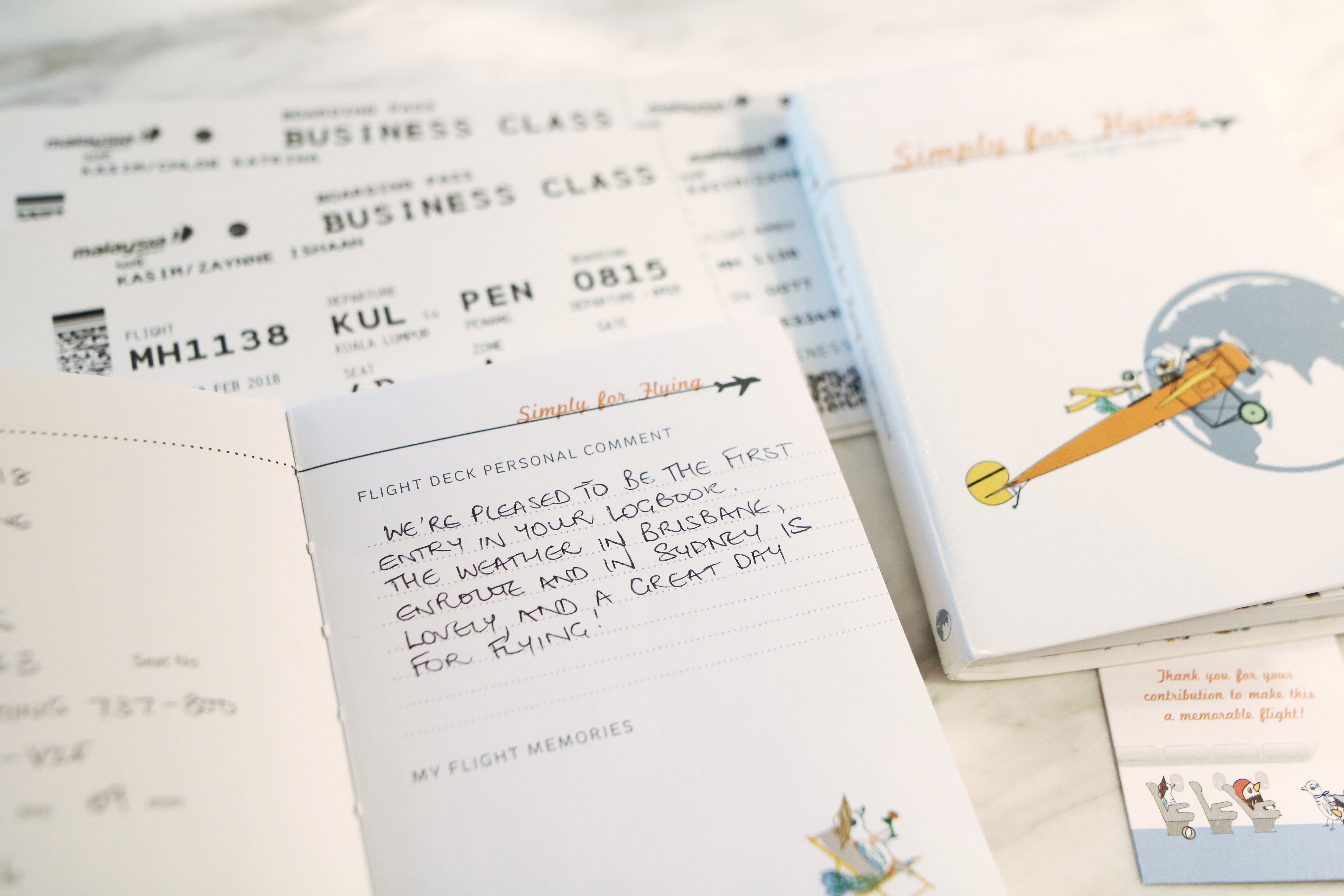 Tell us about the flight logbooks - what is the intent behind them?

There’s simply no other means to keep a record of your child’s flight history in this way. We have all saved our kids’ boarding passes but to have each and every flight recorded from a baby’s or child’s very first flight with all its flight data, personal flight memories, the Captain’s Signature and personalised comment is just so special and unique. This can’t be recorded on a tablet or a photo. The flight history will always be something this child can take with them into adulthood and can one day share with his/her own children. 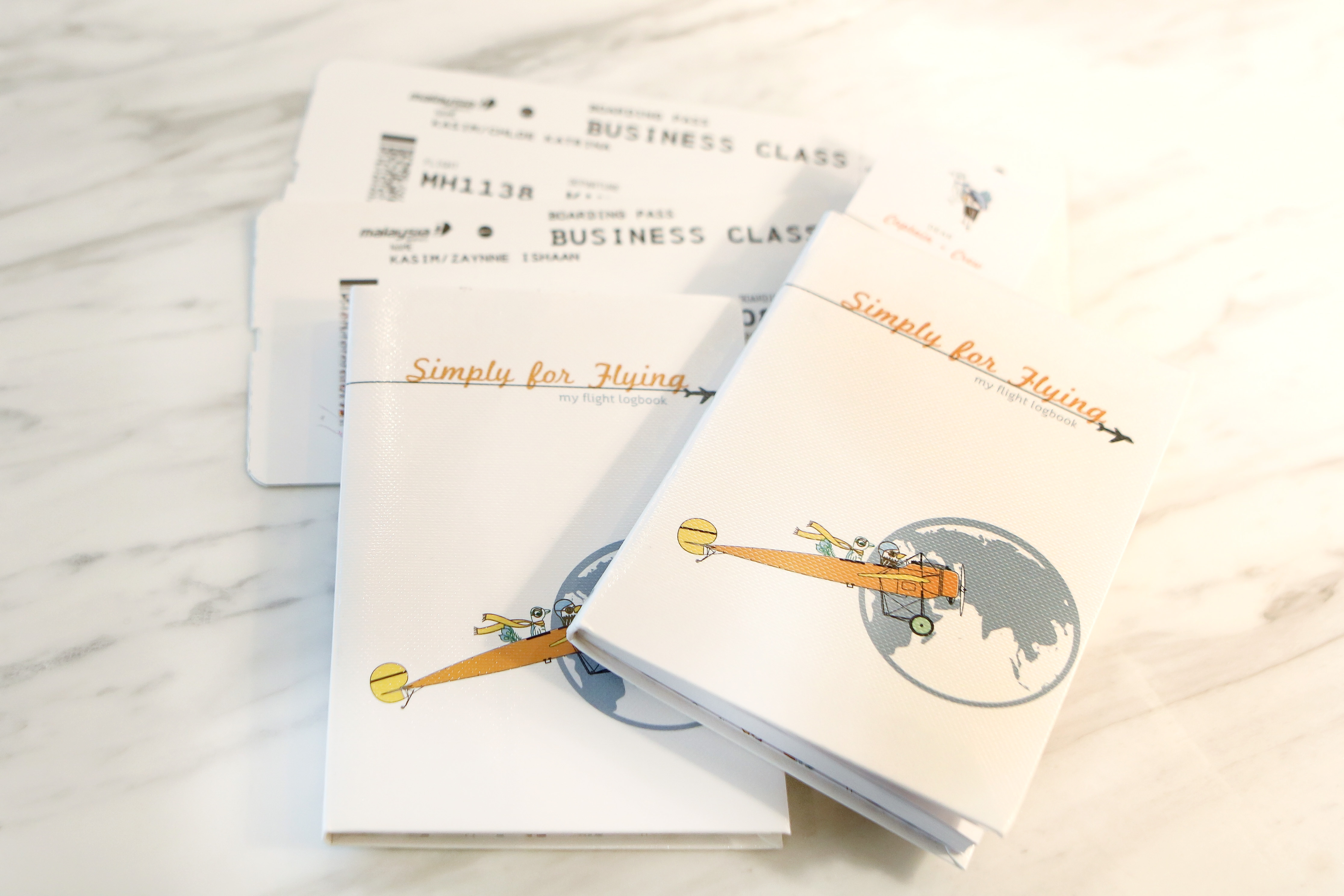 Where have your own flight logbooks taken you and your children?

My eldest son now 11 years of age has flown on 232 flights in his short life and visited 22 countries, soon followed by his sister who is two years younger. The youngest – aged two – recently completed her first logbook which can log 42 flights with over 80,000+ Nautical miles already flown. She still has some catching up to do! Their favourite aircraft is the A350, and this year their logbooks will take them to already planned trips – Berlin, Sicily, Amsterdam, Lisbon/Porto, Lombok and Melbourne. 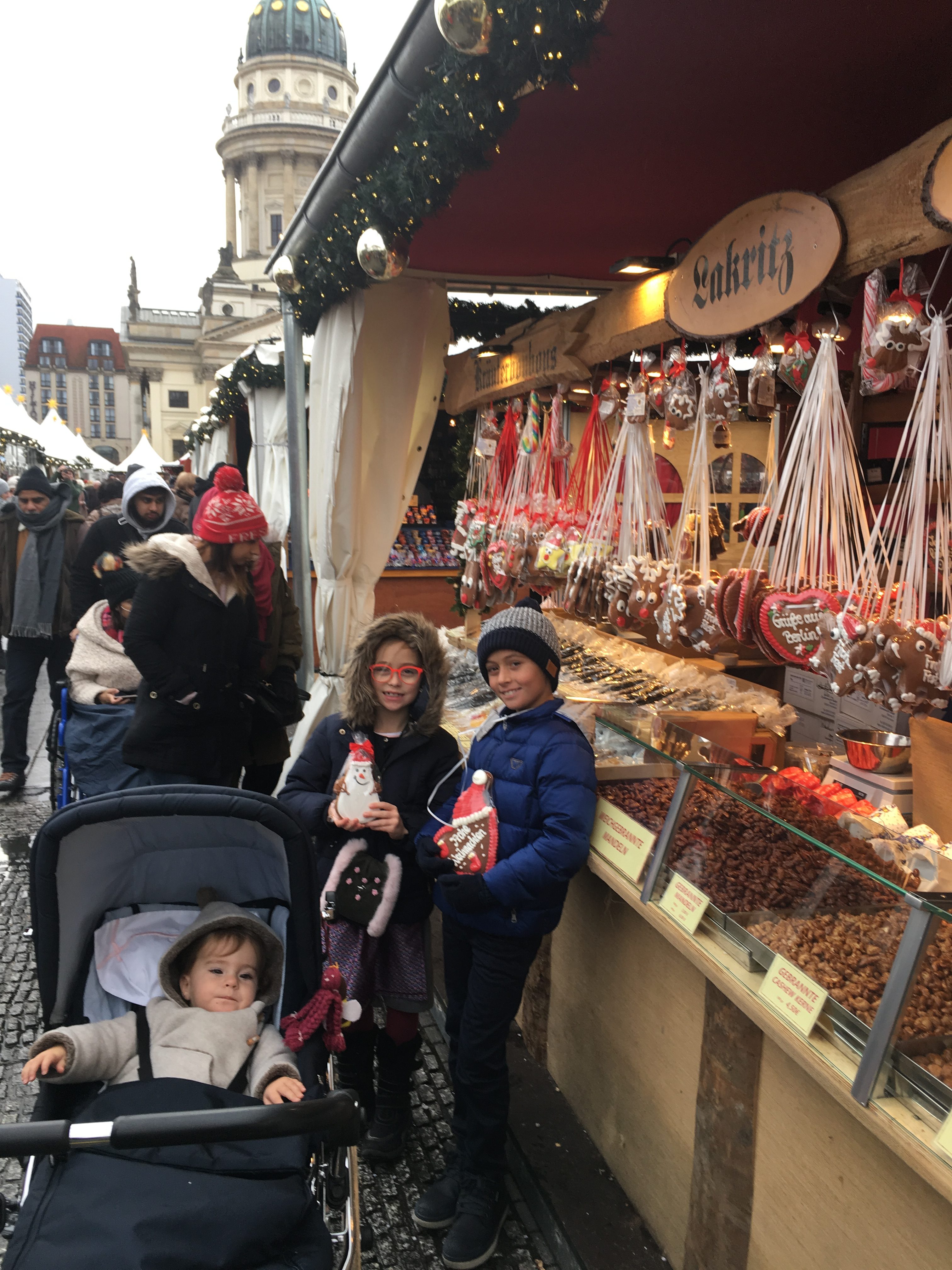 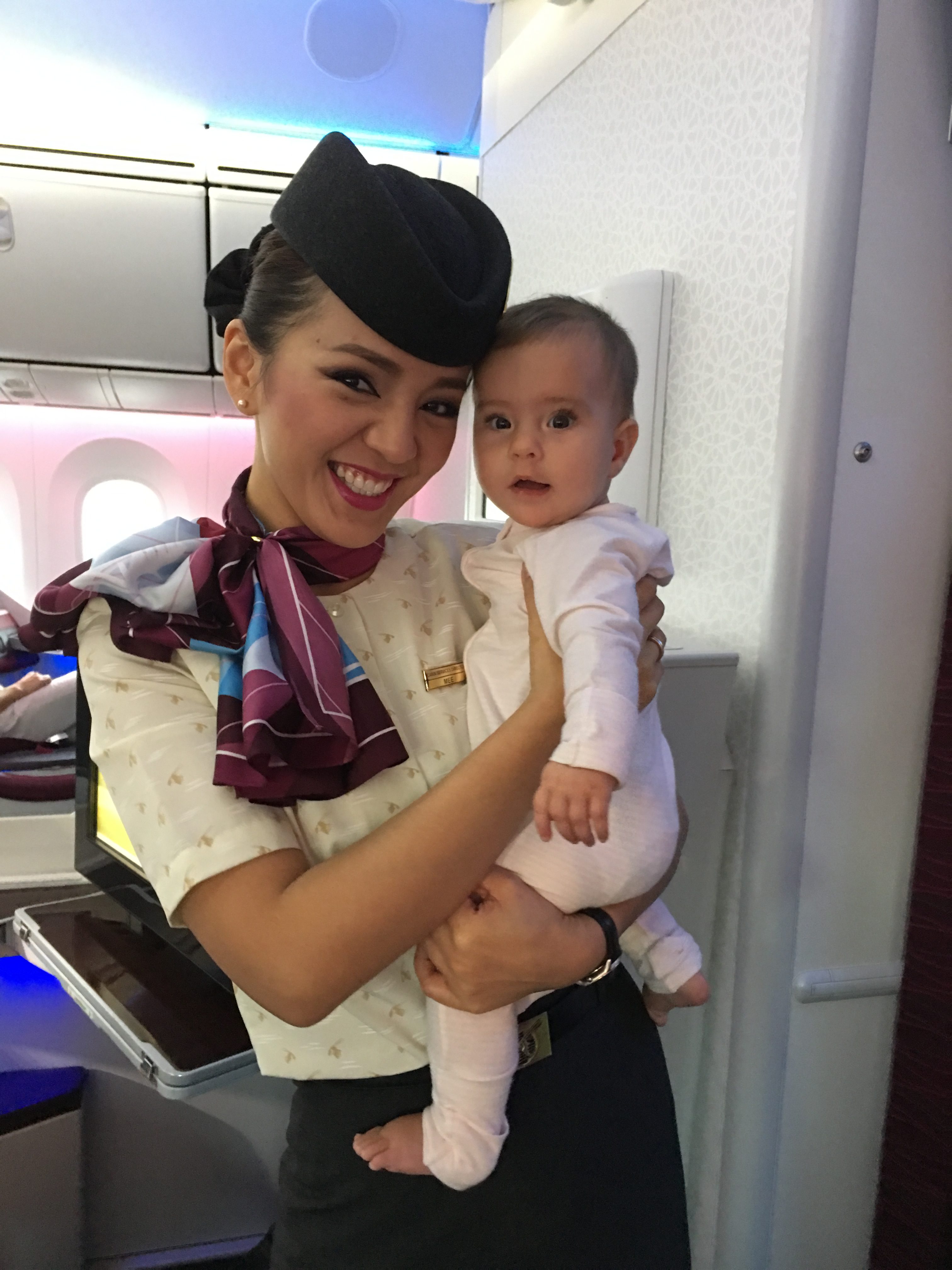 What are your tips for travelling with children?

That’s like opening a can of worms! There are so many tips and they differ so much depending on the age of the children, how many children you are flying/travelling with, flying/travelling solo or with your partner/husband, where you are travelling to and class of travel … But here are my top tips! 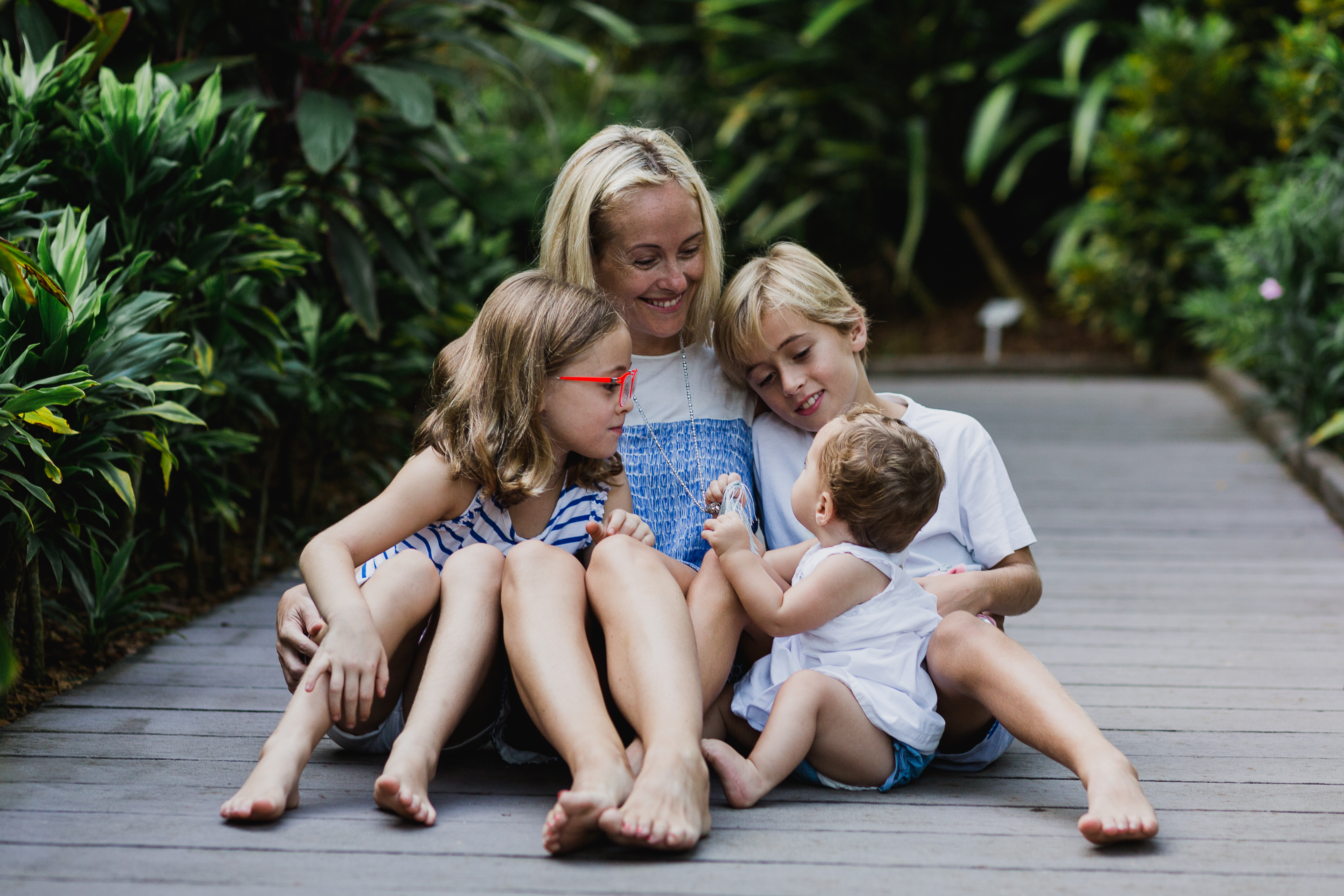 Oh, so many! I’m currently revisiting this time with my youngest and it sure is a test for the survival of the fittest! Not only do you as a parent have to be well rested you always have to expect the unexpected. It certainly is the hardest period as their attention span is so short and they are restricted to a small space for the duration of the flight. Before embarking on your flight do consider what time of the day you are flying as this will determine what you end up taking on-board. 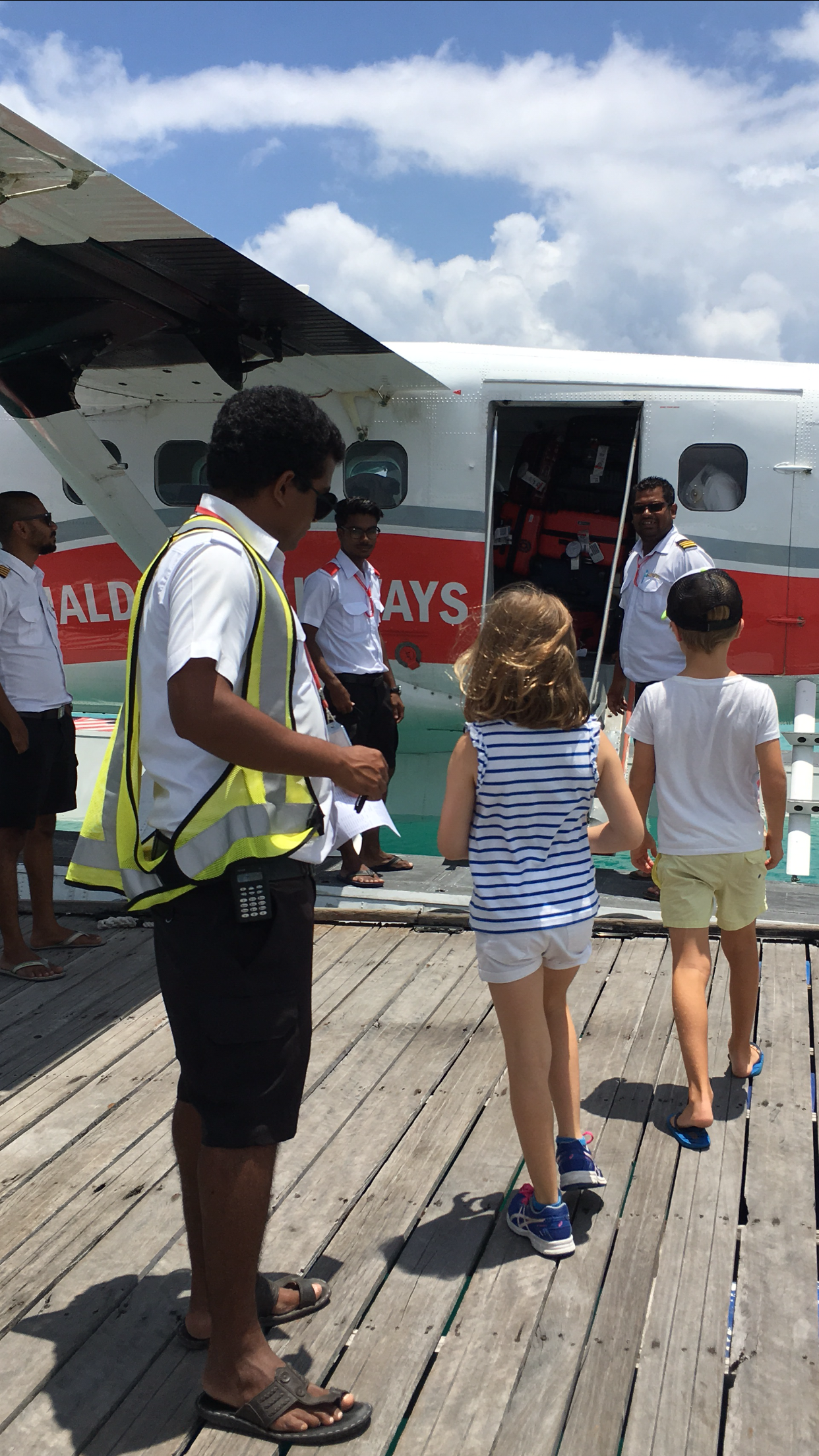 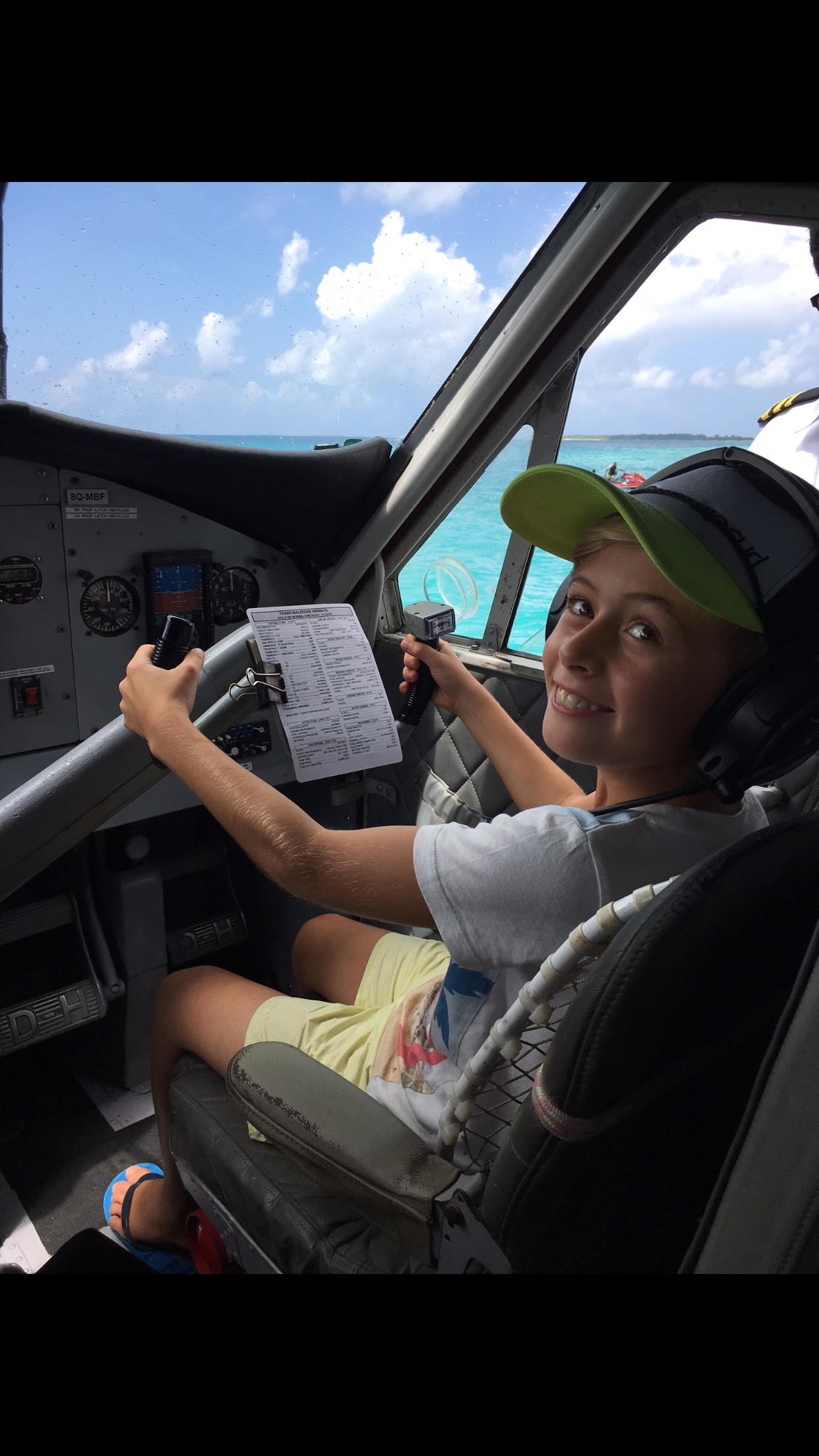 Where are your favourite places to travel to with children?

Maldives If you would ask my son that very same question he would answer it quite simply with the Maldives! If you asked him where he’d like to spend the next holidays it would be the Maldives. He’s itching to go back. Our first trip to the Maldives was in September 2015 and we’ve returned another 3 times since then. From Singapore it was only a short 4.5 hour flight and then another 30 min via seaplane so totally manageable. Our favourite resort would have to be “LUX SOUTH ARI ATOL”- it has such a relaxed yet fun vibe to it. It’s also not totally overpriced in the shoulder periods, best time to visit the September/October holidays/not at full occupancy. Our kids don’t spend much time in kids’ clubs so that’s never a selling point when selecting a resort. All my kids need is a beach, water activitiess= and ice cream! Yet the main reason would have to be the chance to snorkel/dive  with whale sharks. We’ve been fortunate to snorkel with them each visit, although diving with them has eluded us. Just last year our 11 year old son completed his PADI diving course at the resort for kids aged 10 years and over. My husband and I love diving so being present on his very first dive was so special. We just love that the kids are always outdoors and no ipads are in sight for the entire stay! Sri Lanka Just last year we travelled to Sri Lanka for the very first time. We always try to balance sightseeing and beach time so there are no complaints. Our trip was tight with just under 2 weeks so we knew it was impossible to see everything we wanted to see so we definitely will return! This trip took us from Colombo to Kandy, train ride to Ella which was definitely the highlight for the kids. Visited several tea plantations, climbed Little Adam’s Peak, onto Udawalawae National Park for some local animal action and then ending up on the south coast in Galle for 2 days for some relaxed beach time! Next trip will be the South Coast of Sri Lanka only. Singapore Having lived in Singapore for 5 years I can vouch for this little island also known as the “Little Red Dot”. Such a great place to take the kids. A super family friendly country and with a tropical climate kids love spending time outdoors. Our favourite places The Singapore Zoo, Sentosa Island, The Botanic Gardens, Garden’s By the Bay, Bounce Lab for some indoor trampoline fun and biking along the coast! Oh how we all miss the variety of food in Singapore and the dumplings! My kids love watching Crazy Rich Asians because they miss it so much. 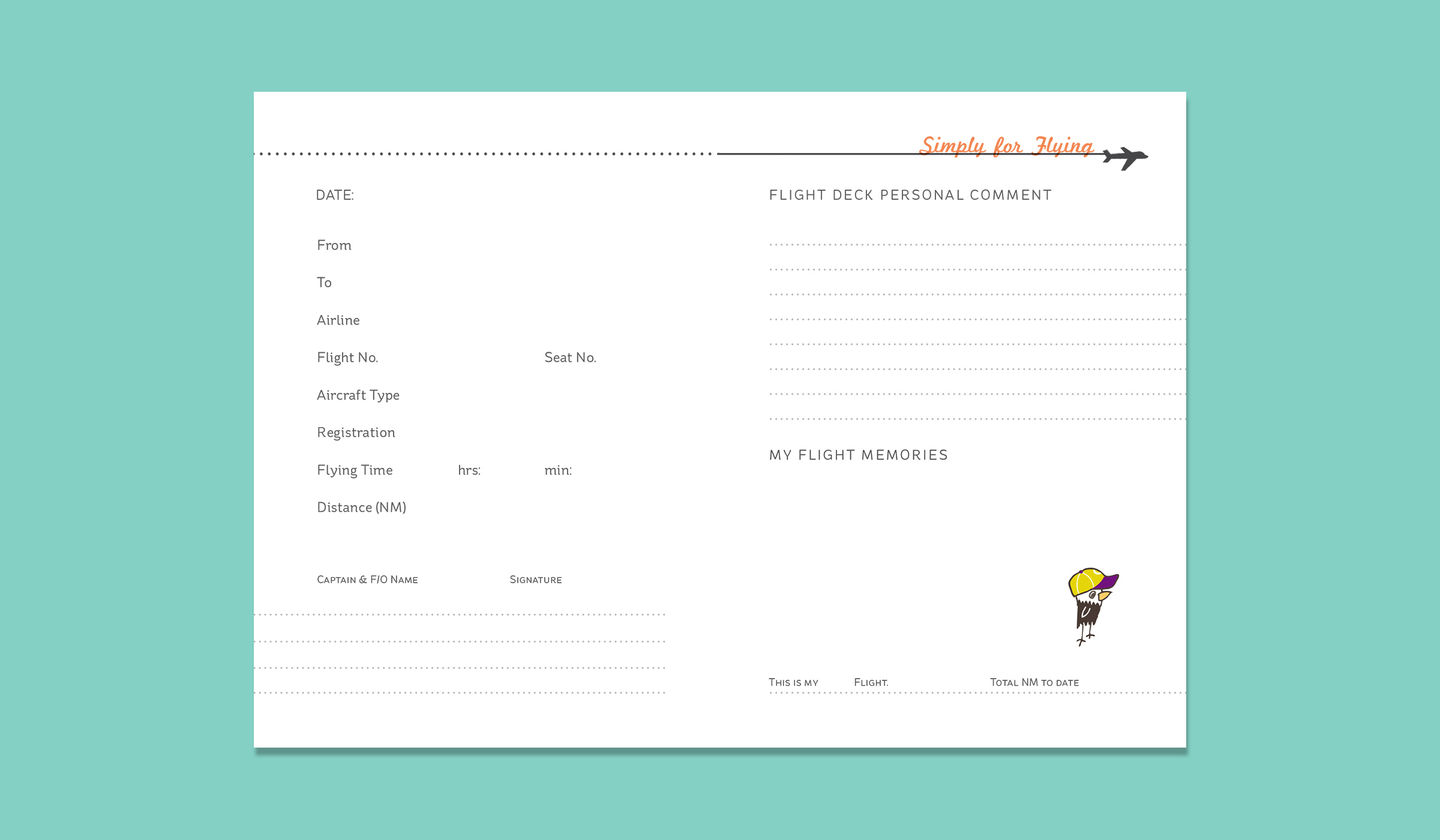 What important lessons/memories/etc do you think are created through travelling that children simply don’t get at home?

I’ve met many families who either just don’t see the value of travelling with their children while they are young or think it’s a complete waste of money, these are the extremes but more common than you may think. They also have the belief that their children won’t remember anything. Of course, they won’t remember every little detail, but they will lock in moments and memories which they will relate back to like my children do. I’m often surprised what they do remember even if the memory is sparked again our annual photo albums. They definitely remember the good and the bad haha! As a child, I was given the gift to travel and live aboard so it feels natural to pass this onto my own children. I have always wanted them to feel as though there are no borders, that it is only us who creates them! I have also found those who don’t travel to be less tolerant of others and even my children have experienced this first hand. I’m by no means saying that you have to fly and travel to far away destinations but exposing children to what’s out there beyond their own backyards gets them thinking, exploring and questioning. I love the fact that my children can relate to so many of the places they hear about in their classes and can share their own experiences of these places with others. My brother in law and his family (3 kids aged 3-6 years) just recently returned from a 3-month caravan trip which took them from Victoria to SA/ WA and NT. We were able to actively take part in their day to day adventures via their FB page. We all know being cramped into a confined space for all that time certainly wasn’t always easy but the happiness on their children’s faces was worth GOLD! To witness through pictures and stories what they were experiencing each day just can not be learnt in a classroom or read in a book! 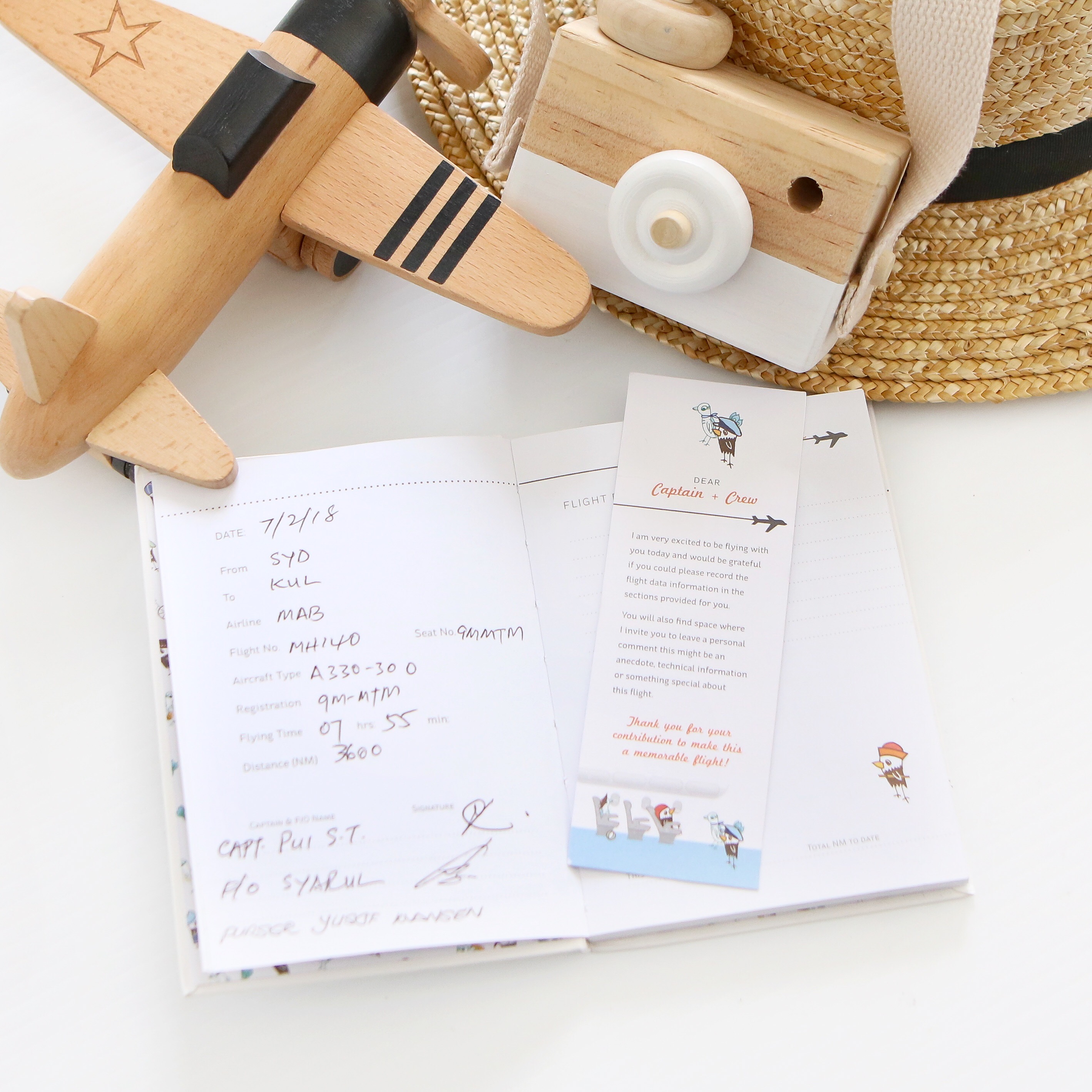 Your books are a beautiful opportunity to create memories. What are some of the favourite memories you have travelling?

The lovely fact about the books you can flip through the pages and the memories keep flooding back. In my son’s first logbook, at the time we were living in Germany and were booked on a flight to Australia. The Volcano had erupted in Iceland and the skies were filled with ash over the UK and parts of Europe which meant planes were grounded. Added to this I was with on my own with our children in Germany and my husband was still stuck in London due to a work related trip. There were no flights out of London for days and we were at risk of being delayed by days even out of Frankfurt with the backlog of flights. He managed to use his superpowers, ferried across the channel, hitch a ride, hopped on a train and found his way home to us. We managed to be on the very first Qantas Plane out of Frankfurt which the Captain had noted in our son’s flight logbook. “First flight out of Frankfurt after the volcanic ash.” The flight logbooks open doors as many of my customers say! What they mean is that the logbooks bridge the gap between children travelling and the flight deck. We like many other flight logbook owners have enjoyed personal visits from the Captain/ First Officer, received invites to the flight deck to meet the Captain/FO after landing, received pictures, flight maps, weather maps, personal flight announcements and even an upgrade! I feel that if the flight deck know there is an aviation enthusiast on board they’ll often go the extra mile to make the trip even more memorable.