Are These The Sleekest Prams On The Market?

When I used to work in the VOGUE office, we’d lust after accessories straight off the runway. Prada shoes, Dolce & Gabbana earrings and Celine bags. Isn’t it funny how things change. The moment I fell pregnant, my attention turned to the new accessories I’d be needing. Designer earrings certainly weren’t on my radar anymore. Nappy bag (I ended up never using one and went for a basket bag instead), nursing bras, car seats, and of course, The Pram...

Now, The Pram is a big purchase for a mother-to-be. The father-to-be will often try and offer his opinion on what pram he thinks you should purchase, but he is usually shut down immediately. He doesn’t get that it’s more than a piece of equipment to push your new baby around in. It’s undeniably the biggest accessory – literally – a mother will ever purchase, so it has to look good. She wants to feel proud pushing it, but more importantly, it needs to be functional and easy to use (seriously some of the prams I tried were near impossible to work out). I still remember the first time I spotted the Joolz Geo. One of my dear friends had it. I noticed the luxurious brown leather handles immediately. I then noticed the chic parrot blue colour, which contrasted beautifully with the leather. Next, the sleek silver frame. It was all just so stylish. It’s not surprising that Joolz’s single goal is making your life as easy and beautiful as possible. It’s what they call ‘positive design’. I examined her pram closely. The removable XL basket held all of her essentials (why is it that we need so much stuff to leave the house with a baby?!). And then I watched in amazement as in one motion, the pram folded up in one compact piece with a transport lock. Talk about sleek. 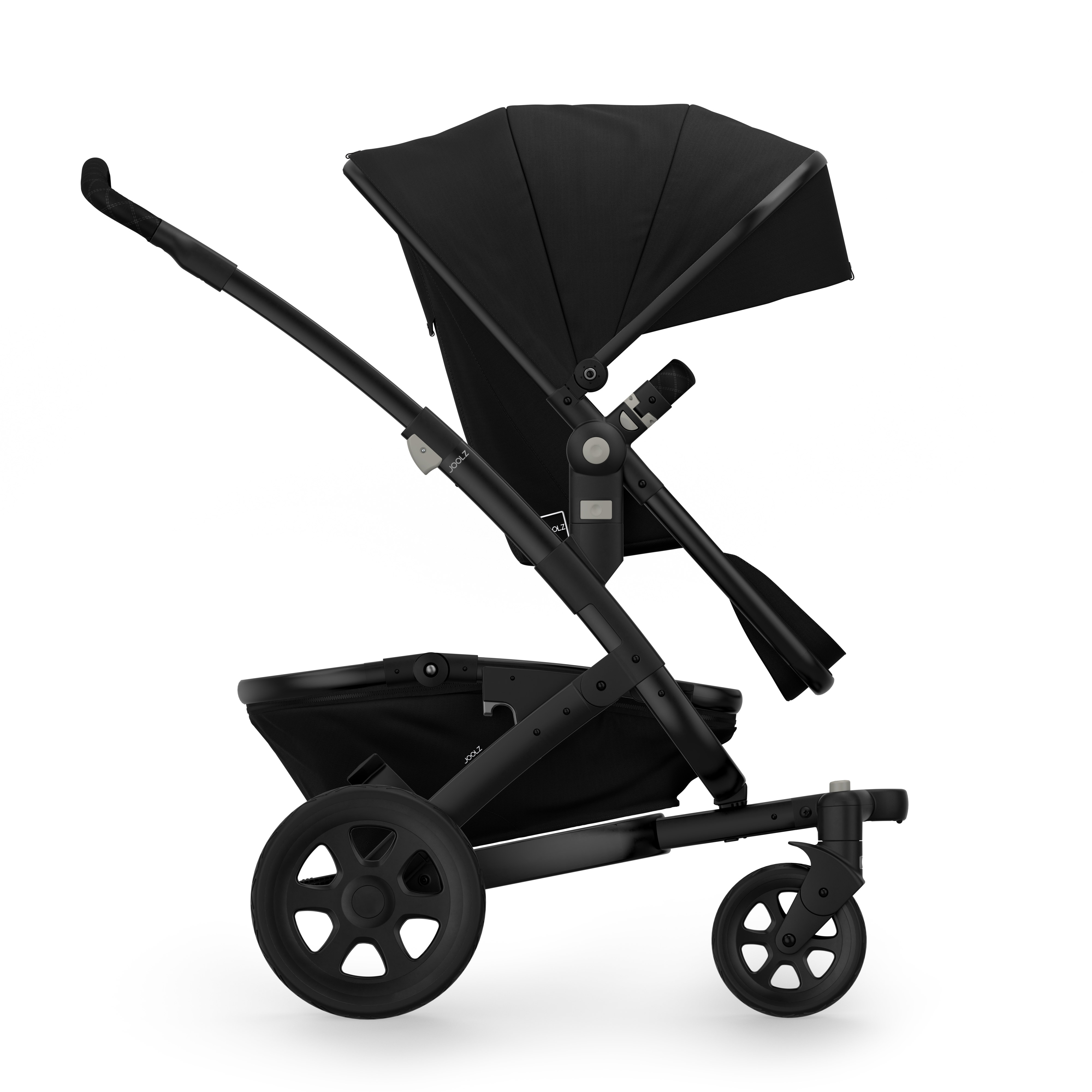 The good news? The Geo has just got better (and so has their other iconic pram the Joolz Day, but more on that later). The brand has just launched the new Joolz Geo² in Australia. It’s just as chic, of course, but they’ve added a few new features to create the new and improved Geo². The ergonomic seat with an open harness and magnetic buckle, the puncture-proof tyres, and the extended large sun hood (UPF 50+) with see-through ventilation are the most notable new features (any mother who has tried to shield her child from the glaring Australian sunshine will greatly appreciate the new sun hood). Now, if you’re anything like me, you’ll also appreciate the fact that the creators have taken into account the fact that mothers seem to do most things with one hand. There is one-hand steering (has anyone else out there tried to push a pram while talking on the phone and drinking a coffee? We just love to multi-task). It also only requires one-hand to open the bumper bar. You’ll also love the four-wheel suspension and large wheels. I live in an area where the streets are quite narrow and bumpy, so love how smooth this pram is. It’ll basically take you on any family adventure. The bassinet and seat have a high position, so you don’t have to bend too far (this is ideal for a tall person like me) and you can easily pull your little one up to the table if you’re out and about. The new Joolz Geo² is available as a mono or duo pram. The mono configuration has a large bassinet or seat on top and an easy-access removable XL basket underneath. Planning on another baby soon? It’s easy to expand for a second child by exchanging the basket for a lower bassinet or seat. This compact duo configuration lets you carry two children together; whether that’s twins or a younger and older child. And even with two kids on board, you remain perfectly mobile thanks to the compact size and the compact one-piece fold.

Now, before we sign off, that’s not the only big launch for Joolz this year. They have also taken their best-selling Joolz Day to create the new and improved Day², with 20 changes in total (pictured above). Just like the new Geo – the functionality mentioned above is the same but the storage is a little smaller – they have combined ergonomic comfort, ease, style and sustainability together in one product. The Joolz Day² has the same sleekness of the Geo² : streamlined chassis, leatherette touch points, sophisticated fabrics and a new aluminium logo. Two new fabric colours and new leatherette designs have been created. First to be released in Australia is the Earth Collection; colours include Parrot Blue, Camel Beige, Hippo Grey and Elephant Grey. Also, check out the new selection of accessories that perfectly match the Joolz Day². There’s more: the brand will even plant a tree in the Joolz birth forest in Columbia for your newborn when you register your pram online (read more about this incredible initiative here). We certainly know what pram our team will be pushing next.

The new Joolz Geo² Studio Collection is available along with matching sleeping bag and nursery bag. The RRP starts from $1,969. The Joolz Day² is available now in the Earth and Studio (Gris and Graphite only) Collections. RRP starts at $1,869 for the Earth Collection. For more information, go to www.my-joolz.com.au