The Face Behind the Faceless: Artist Guady Ramon on the Art of Motherhood 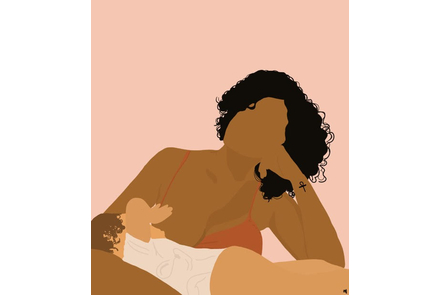 “I love the idea that none of my subjects have faces”, she tells us. “I feel like it really unites us all, as mothers that share similar experiences…Yes, we all live different lifestyles but all of those feelings you have after becoming a mother, those are what make motherhood universal.”

That facelessness might be part of the reason why her work resonates with so many women, allowing them to really see themselves in her art. As Guady puts it, “I am her, she is me, we are one”. And when a picture tells a thousand words, there is something in Guady’s work that perfectly describes the joy, messiness, and exhaustion that is parenting.

Like all the mothers she portrays, Guady’s experience has been peppered with ups and downs. She found the transition from one to two children hard, although once her daughter arrived “it all made sense”. And despite the challenges – working late nights after the kids are in bed – she tries not to be too hard on herself. “With time”, she says of motherhood, “you learn to give yourself grace and try your best to go with the flow. You realize that you too have been born, into a new person, and just being mindful of that part is very helpful.”

We speak to the California-based artist about everything from diversity, to the newborn phase, and to making a career out of a side project. 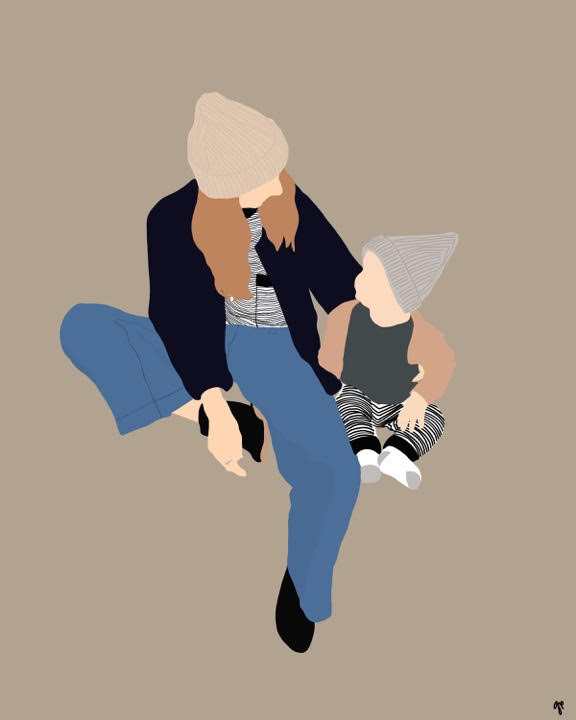 Tell us about your childhood…

I was actually born in Argentina, and my parents moved to California when I was really young. We lived in LA for a bit and then moved to Orange County, California, where I’ve spent most of my life.

You've described motherhood as "one of the toughest, most rewarding things I’ve ever done". Did you always know you wanted to be a mother?

Yes! I’ve always know that I wanted to be a mother, since I was young I always had that feeling like it was important to me. Luckily I am able to experience this lifetime as Lucas and Vivian’s mom, and it makes me so thankful.

After you had your son Lucas, what was the transition into motherhood like? Did you enjoy the newborn phase?

I was lucky to have family nearby when Lucas was born so that made a huge difference. My mom helped me a LOT. I probably would have lost my mind if she wasn’t there most of the time. Looking back, I really enjoyed the newborn phase but in the moment, it was hard to soak it all in because there was so much going on. Some days were smooth and great and others were really tough. So many emotions, so many things to learn and all while trying to hold on to the person you were before and not feeling totally lost— that was hard. But with time, you learn to give yourself grace and try your best to go with the flow. You realize that you too have been born, into a new person, and just being mindful of that part is very helpful.

Do you find being self-employed and working on commissions gives you flexibility?

I love being self employed and being able to work around my family’s commitments. Although sometimes is can be a little lonely to work alone all day, or even work late at night once the kids go to bed, it really is nice to have the flexibility.

What was your training and how did you come to be a graphic designer and illustrator?

I graduated from CSULA with a degree in Graphic Design/Visual Communications. Shortly after I graduated, I worked for an advertising agency and it’s there that I was able to refine my design skills. I was doing everything from logos, to web design and really diving in and learning as much as I could. The transition to illustration came later after I became a mother to my second child, my daughter Vivian. I think that having two kids under two challenged me in so many ways, and I knew that I wasn’t alone in these feelings and I wanted to somehow share this with other people. I felt like all mothers had their own stories to tell and that’s what I set out to do. Initially this started out as an experimental project that I called ‘The Motherhood Series’. I really wanted to get feedback from people and see if my art resonated with anyone. Once I saw that people were enjoying this type of work, I couldn’t stop drawing, and it almost became therapeutic for me. Also, having a background in fine art, I just knew that my career would some how involve some type of creation of art for other people.

Tell us about your work. What is it about motherhood that you want to capture?

I want to capture how universal yet different all of our stories as mothers are. When I’m drawing I can almost feel the emotions of the mothers in the photos and it helps me interpret them in the most beautiful way possible. Motherhood is messy but it’s also so beautiful and I think that this type of art really captures that in a really simple way.

Your work really shows the diversity that is motherhood. Is that an important feature of your work?

We are all so different yet we are all going through the exact same emotions, in a sense. Yes, we all live different lifestyles but all of those feelings you have after becoming a mother, those are what make motherhood universal. Diversity is huge. Mothers of all races, shapes and sizes should always be portrayed because: I am her, she is me, we are one.

Your work is quite minimalist and pared back. What is it that you love about faceless portraits?

I feel like this style was achieved pretty organically. I didn’t really set out to design like this but once I started playing with shapes and colors I really loved how the minimal objects looked together. My initial illustrations were super minimal and as time went on I started adding a little more texture. I think this is one of my favorite parts about being an artist, the fact that your design style can change and shift as you grow and learn new things. I also love the idea that none of my subjects have faces. I feel like it really unites us all as mothers that share similar experiences.

How did you find the transition from one to two children? Was it harder or easier second time round?

HARD! One to two children was definitely harder than going from none to one. But once Vivian was here, it all made sense. She was supposed to be here. She is fearless and so independent, she’s a bubbly ball of fun and because of her, Lucas and I are always learning – she balances us out quite well. 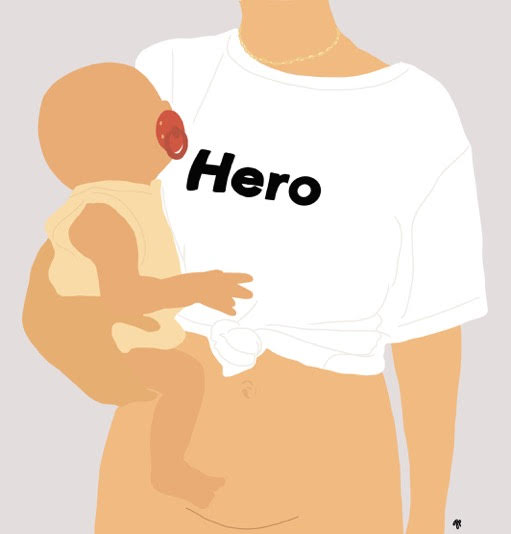 What's been your career highlight so far?

I’ve gotten to work with a few great brands in the mom world that make me very proud but I think the true highlight so far is all the wonderful women and mothers I have met along the way. I am constantly inspired by so many people.

What would be your dream commission?

Wow, I’ve never thought about this…I really don’t know. Maybe to illustrate a book for a writer I love?

What's been your favourite part of motherhood?

Realizing that my children are helping me grow into a new version of myself. They are my teachers and they are actually teaching me so many things I did’t know about myself. It’s like we are all growing up together, and that is the best.

And the most challenging?

Giving both of my children the attention they crave at the same time. Sometimes it gets a little crazy when everybody needs mom. These are the times I try to breathe, relax and try not to freak out. Also working late at night after everyone is sleeping, that can be draining at times.

Don’t let fear keep you stuck. Do it. Whatever it is, do it. You won’t be perfect at it (none of us are), there will be really great days and then days you second guess literally everything you are doing, but you will learn so much about yourself when you challenge yourself to be uncomfortable. From the uncomfortable comes the growth, the re-birth.