The New Normal: Melanie Dimmitt Wrote The Book On Raising A Child With Special Needs

Writer Melanie Dimmitt has a sense of humour. It’s both a good thing, and a somewhat remarkable thing, when you consider what she’s laughing at. At 40 weeks pregnant with her first child, Arlo, Melanie felt that something was off with his movements. After presenting to hospital, Arlo was born in the space of ten minutes, via emergency caesarean, and with a brain injury that would later lead to a diagnosis of cerebral palsy.

It wasn’t exactly the start to motherhood that Melanie had been expecting. In her own words, she felt “devastation, fear, disbelief, sadness, denial, why me?!”

Those feelings were temporary. In their place, the now mum-of-two lives the entirely ordinary, joyful, all-consuming and mundane reality that all parents do. When we asked her what the best and worst things to say to the parent of a child with disability were, her answers were frank and funny: “For me, the worst thing you can say is ‘I’m sorry’. The best thing you can say is, ‘Red or white?’”

Although, perhaps that life isn’t entirely ordinary. After all, most mothers don’t quite find the time to read a book, let alone write one. But the proudly published author of Special: Antidotes to the obsessions that come with a child’s disability quickly realised that in her newly minted special-needs parent’s role, she needed a guidebook. And there wasn’t one – or not the kind she needed, anyway. So she wrote it. Like Melanie, Special is wry, clever, warm and honest. Despite its subject matter, it’s absorbing and voraciously readable (a career in journalism and magazines makes for one hell of a storyteller). And while there are moments of heartbreak, there’s plenty of light and laughs to be had alongside. If you missed our extract from Special last week, you can read it here.

We chatted with Melanie about pregnancy, life with two (“more than twice as hard as life with one”), and how exactly she manages that everlasting juggle.

Tell us a bit about your childhood. Where did you grow up and do you have siblings?

I spent my childhood and teenage years in Perth, accruing an impressive collection of freckles. My happiest memories are of camping with my parents and younger brother, Eamon, swimming in rivers and reading Harry Potter by head-torch light. Eamon and I both wound up in Sydney working in creative industries (he’s a cameraman) and our folks come over to visit a lot, especially now that there are grandkids on the scene.

Have you always wanted to be a mum?

Absolutely not. Despite coming from an enormous extended family with babies aplenty (my mum is one of 10) I was never all that into them. It wasn’t until I’d been with my partner, Rowan, for a few years that I thought it might be nice to try and make one, but we were very ‘if it happens, it happens’ about it.

How did you find out you were pregnant with Arlo?

Row and I had just come back from a trip to Europe where we’d bought a ring from a charming Parisian called Pierre and, as you do, got engaged. A week or so after we’d arrived home I realised that my period hadn’t done it’s usual, completely un-ignorable thing, so I took a test and two lines appeared. Row and I couldn’t believe it, and made our excited-but-shitting-our-pants way to the chemist to buy loads more tests. All positive. Evidently, this was happening!

How old was Arlo when he was first diagnosed? What was your initial reaction?

Arlo was six months old when he was diagnosed with cerebral palsy and my initial reaction was a lot of things: devastation, fear, disbelief, sadness, denial, why me?! Our smiling little guy hadn’t hit any gross motor milestones – he couldn’t hold his head up, roll over, or sit – but I just couldn’t accept that he wasn’t going to get off scot-free. I’ll venture back to our birth story for a bit of context here…

When Arlo was still very much in utero, four days past his due date, his movements felt weird so we went into hospital. Nothing appeared to be wrong but the doctors decided to induce me, and right before they did, Arlo’s heart rate dramatically dropped. A general anaesthetic (for me) and emergency caesarean later and he was out, all in the space of 10 minutes. And despite spending his first week in the NICU, and an MRI showing he had brain damage, we were doggedly determined that Arlo would be ‘perfectly fine’. Right up until that diagnosis.

In the weeks that followed I must have Googled ‘cerebral palsy misdiagnosis’ a million times. I was miserable for months. It took ages for that funk to lift, but by the time Arlo got his second diagnosis (epilepsy, common in kids who have CP) just before he turned two, it was a different story. In just a couple of days we were back down to business, getting on with life and letting Arlo lead the way on his not-so-typical path. 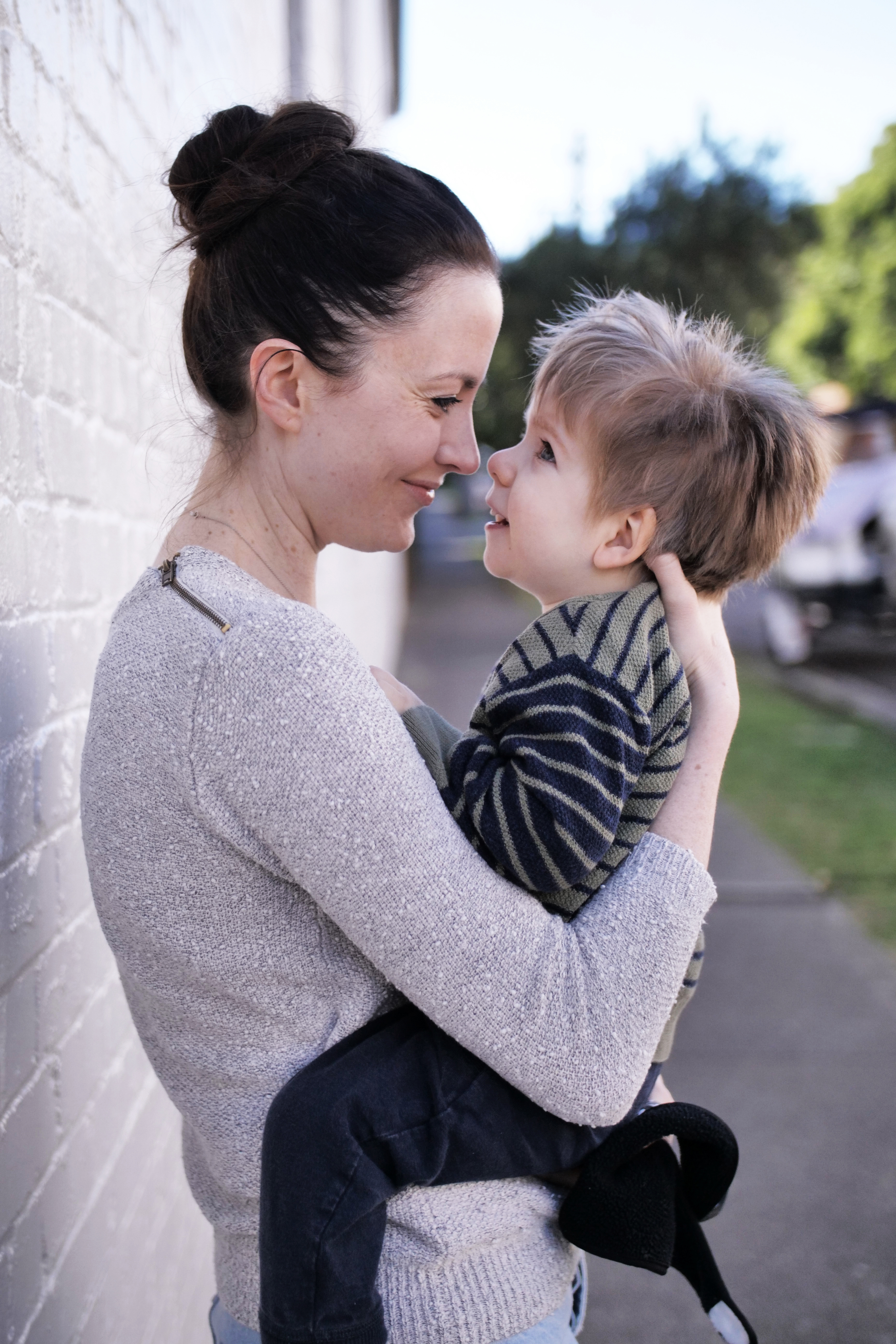 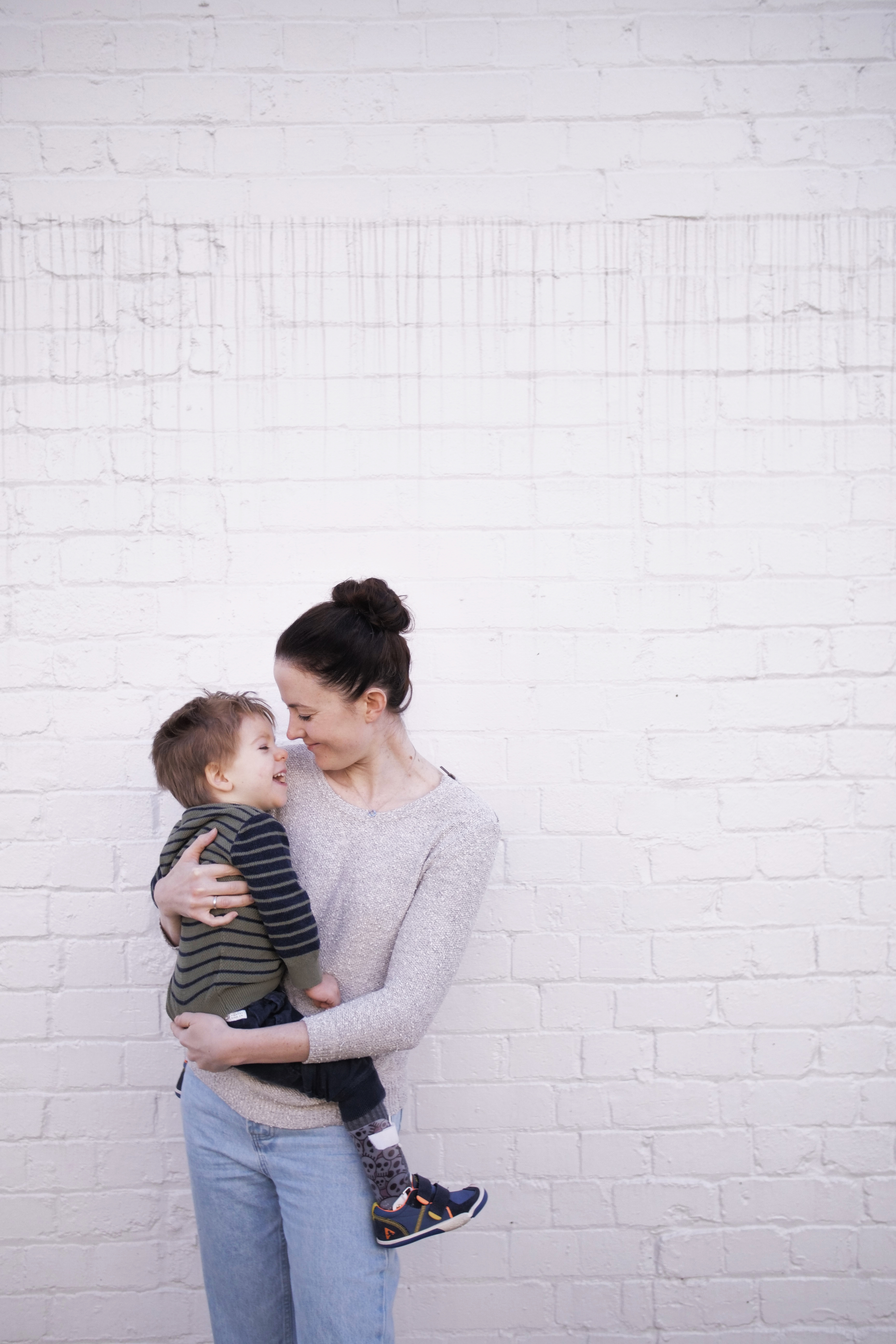 How has life had to change to work around Arlo's condition?

The plan was to return to my job at a magazine when Arlo was six months old, and I’d been back in the office for a couple of weeks when we got his diagnosis. As his early intervention therapies – physiotherapy, occupational therapy, speech therapy… the works – were kicking off, I asked the owner of Arlo’s physio centre to be straight with me: ‘Would it be better for Arlo if I went freelance and could take him to more therapy?’ She told me that if I could, it would. We took Arlo out of daycare and he and I spent our days doing our thing – going to his appointments, circling the park and finding that pesky green sheep.

These days Row’s work is super flexible so we’re 50/50 in the parenting and appointment-attending department (Row probably pulls more weight there, if I’m honest) but I’m so darn grateful that I got to spend those early years with my boy.

You've continued writing and working throughout your parenthood journey. Has that been an outlet for you or is it just your work?

It’s both. I’m lucky to love what I do but it’s also my livelihood, so as much as I’d like to luxuriate in every sentence, I can’t. Deadlines are deadlines, and because we often wind up in hospital unexpectedly (when Arlo picks up a bug, he tends to go all out) I’m wildly protective of the work hours I have and spend them violently attacking my keyboard. That said, writing is a fantastic distraction. In my early years as a parent it was the only thing that hit pause on my obsessing over what was happening with Arlo.

Most parents harbour some fears or guilt in the lead-up to the birth of a second baby. Did having a child with a disability exacerbate that or was it irrelevant? Were you worried about not having enough hands or time to devote to them both?

Going in for round two was terrifying. Arlo’s brain injury was apparently a ‘random’ incident so there was no logical reason to believe it would occur again, but we had the alarming knowledge that babies don’t always arrive by the book. Yes, I was very worried that we wouldn’t have as much time for Arlo’s therapies and exercises, and we don’t. I was also worried that Odette (our little Miss, who just turned two) would spend her childhood schlepping to Arlo’s appointments. But we do our best, and seeing those two make lovey-dovey eyes at each other takes the edge off the guilt.

How is life with two?

More than twice as hard as life with one. Any hope of unbroken sleep, an orderly house or day when Row and I don’t snipe at each other has gone out the window but somehow we are happier than ever. I didn’t think it was possible to love another kid as much as I love Arlo but my heart just got fatter, and that is a very cool thing. This year we’ve ramped up the daycare days for both of them so here’s hoping the juggle gets a wee bit easier.

What's been something that's surprised you about Arlo's condition?

I knew nothing about cerebral palsy – I still don’t know a lot – so everything has come as a surprise. Some surprises have been challenging, like realising how his physical disability affects his eating and speech. Some surprises have been amazing, like realising this kid has a zest for life that outshines Olaf’s love of summer. I guess the thing that has surprised me most is how ordinary life feels, even with some pretty extraordinary stuff going on.

What are the best - or worst - things you can say to a parent of a child with a disability?

What's the biggest lesson you've learned since becoming a parent?

That stuff will happen to you in life and you want it to – that’s the point. That things you think are ‘bad’ are not necessarily so, and that nothing is black and white – there are shades of grey to every experience. That’s three lessons. Sorry.

What are you loving right now?

I’m very late to the Zadie Smith party but lapped up Swing Time and loving On Beauty. Fashion-wise I am big on the basics so stick with Assembly Label, Nique and the occasional Bassike splurge. Not-so-patiently waiting for The High Low Show to come back from maternity leave but Madeleine Dore’s Routines & Ruts podcast has been doing a nice job of filling the void, and I got suckered into renewing my Stan membership for The Bold Type Season 4 which I’m not even sure I like, let alone love, but am totally addicted to. Best to stop now before I further embarrass myself. Thanks for having me!