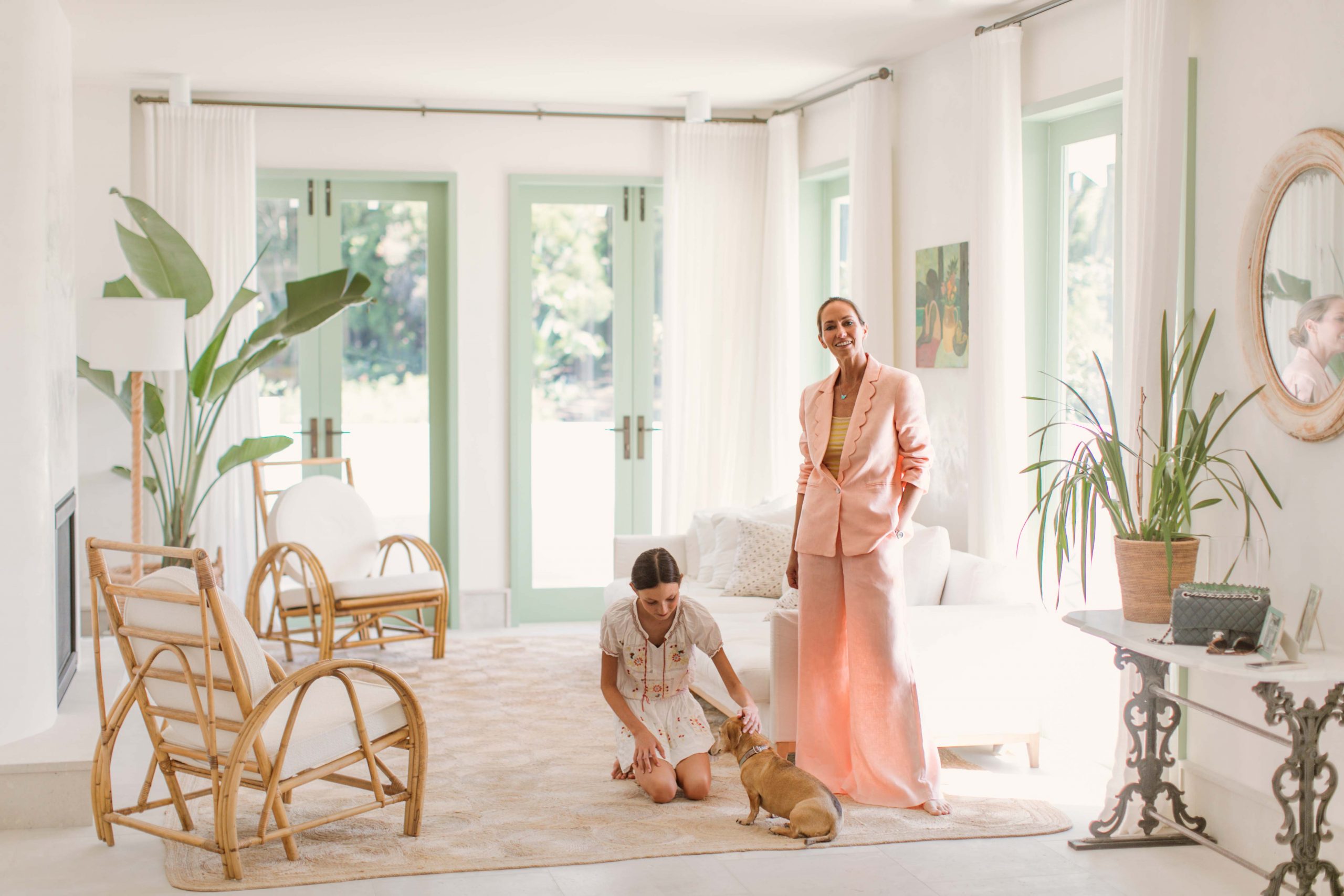 I interviewed Heidi Carter two years after I launched The Grace Tales. At the time, she was running a hugely successful fashion brand Paddo to Palmy while raising two young girls...

Those young girls – Ella and Gisele – are now teenagers. And to the disappointment of many Grace Tales readers, she made the decision to close her fashion brand. When I interviewed author Pandora Sykes, we talked a lot about the importance of knowing when to quit. Because it’s never easy, is it? You feel like you’re letting yourself down. You tell yourself you should keep going. Don’t stop. But as Heidi realised when she decided to quit – your self-worth is not dependent on how much you do. We don’t always need to be doing something (this is something I personally battle with and have written about in my new book Best Laid Plans).  Her friend reminded her to Eckhart Tolle’s words: “we are human beings not human doings”. So she stopped – and closed that chapter of her life.

As well as having a great eye for fashion, Heidi’s got interiors in her blood. Which is why we were so excited to visit her at home in Sydney. Be prepared to be inspired by her honest words and spectacular interiors… 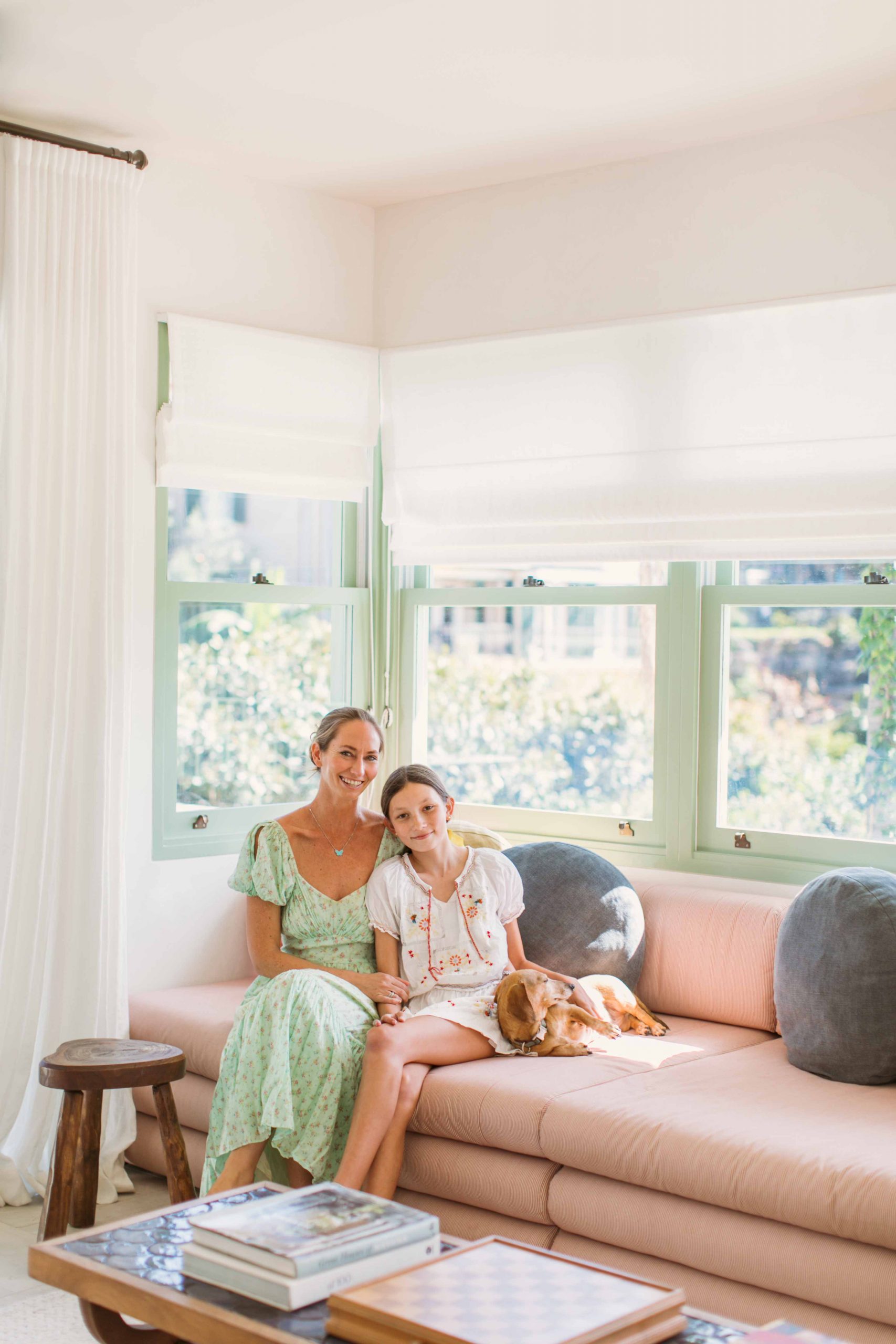 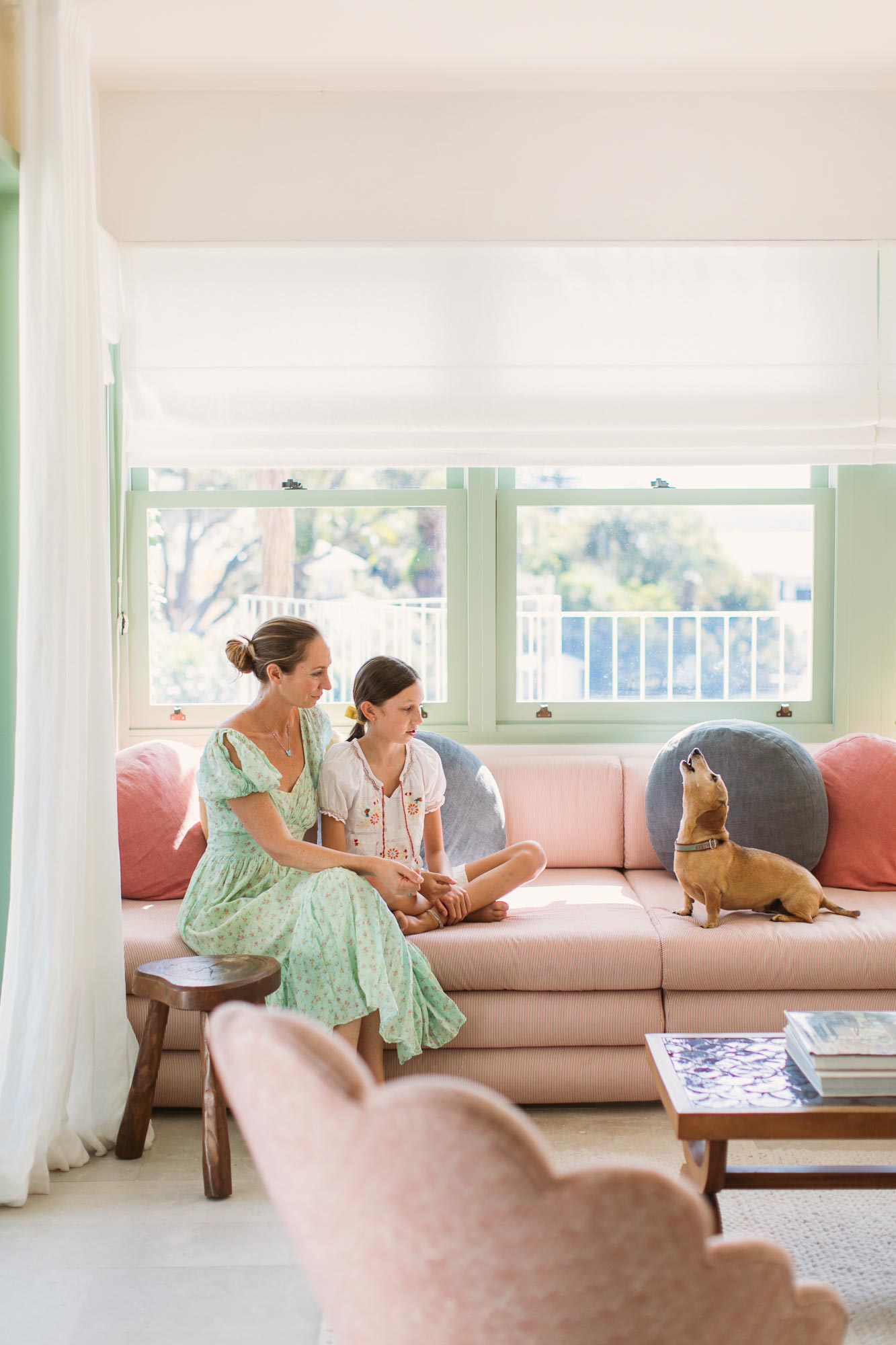 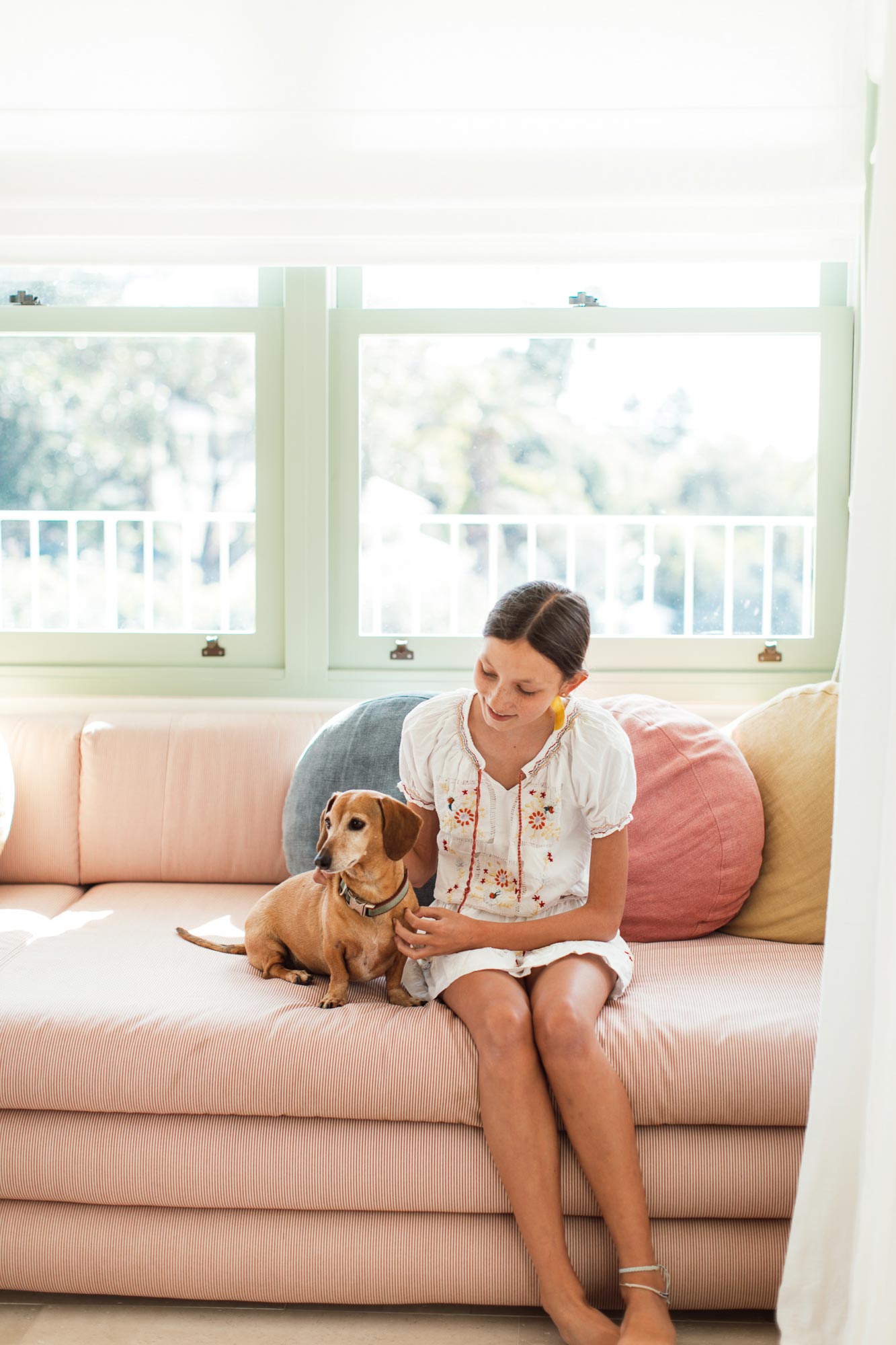 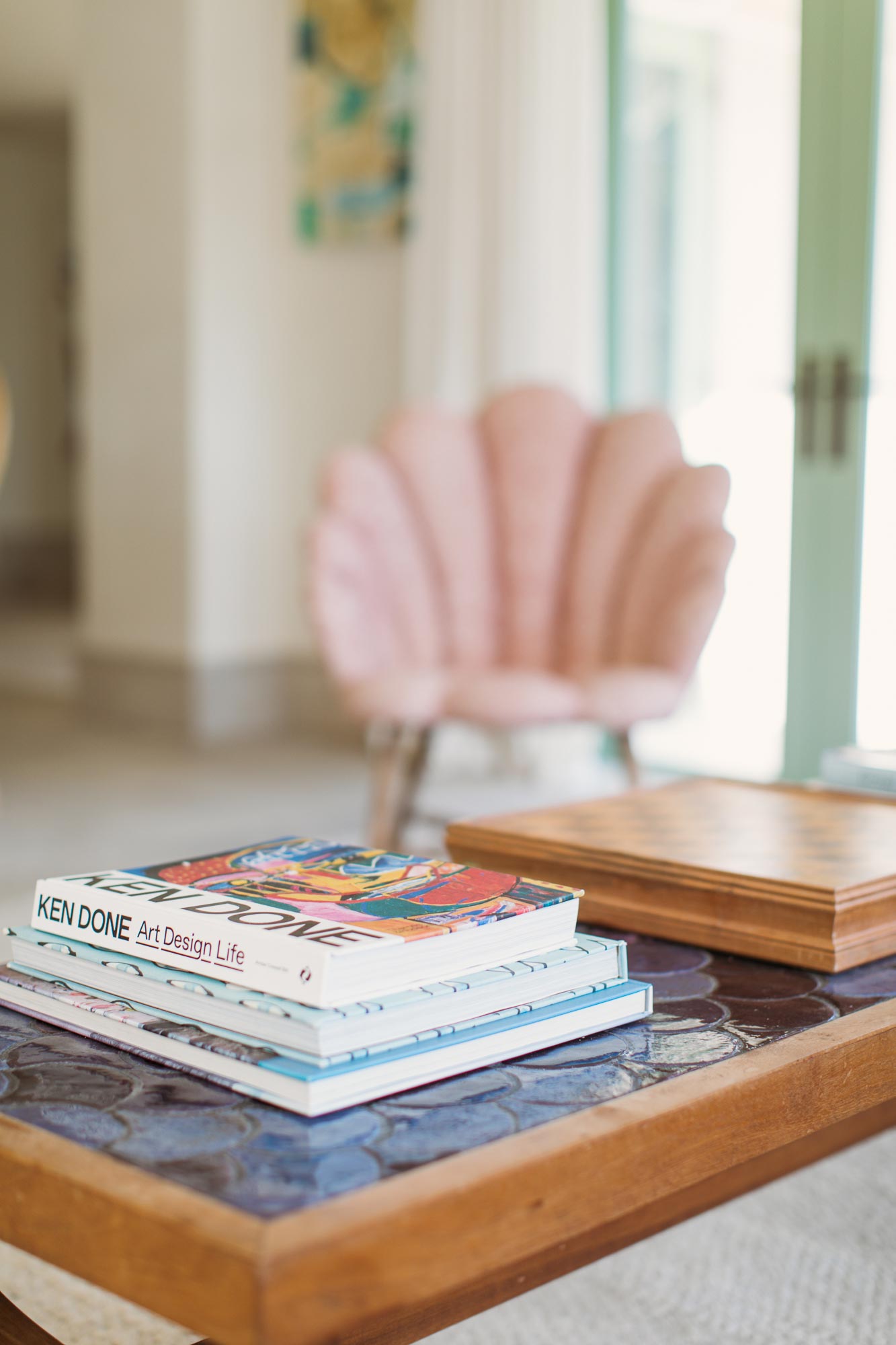 Tell me about your time in Singapore…

It was our second time living in Singapore, so it was an easy move for us. I had given birth to my first daughter there, so it was really nice revisiting all of our favourite spots and as much as we loved living in Sydney, we did miss the ease of travel that comes with living in Asia. There is something very welcoming about living in a large expat community – the people are very inclusive we made some beautiful lifelong friendships there. Lastly the food! We love our Asian food. My youngest daughter craves chicken rice most days.

You live by the ocean in Sydney – what’s your favourite way to spend the morning on a weekend?

During the Covid lockdowns I started ocean swimming in the middle of winter and became utterly addicted to it – I rallied our neighbours to join me, and we started a swim club so each morning rain hail or shine we swim laps at Camp Cove then have coffees at the kiosk. It’s the best way to start any morning.

You founded fashion brand Paddo to Palmy which was loved by so many women – tell me about the decision to close it down?

There were a number of factors involved. The main one being burnout. It just turned into something that I wasn’t enjoying anymore. There were the constant production battles and shipping delays and I also felt like I wasn’t making the best contribution to the environment. There is so much waste which occurs in fashion manufacturing. As much as I was loving the design process and creative side of it, there was a lot of day-to-day daily stress running a business like that largely on your own, and I just needed a break which when you have your own small business is not an option. 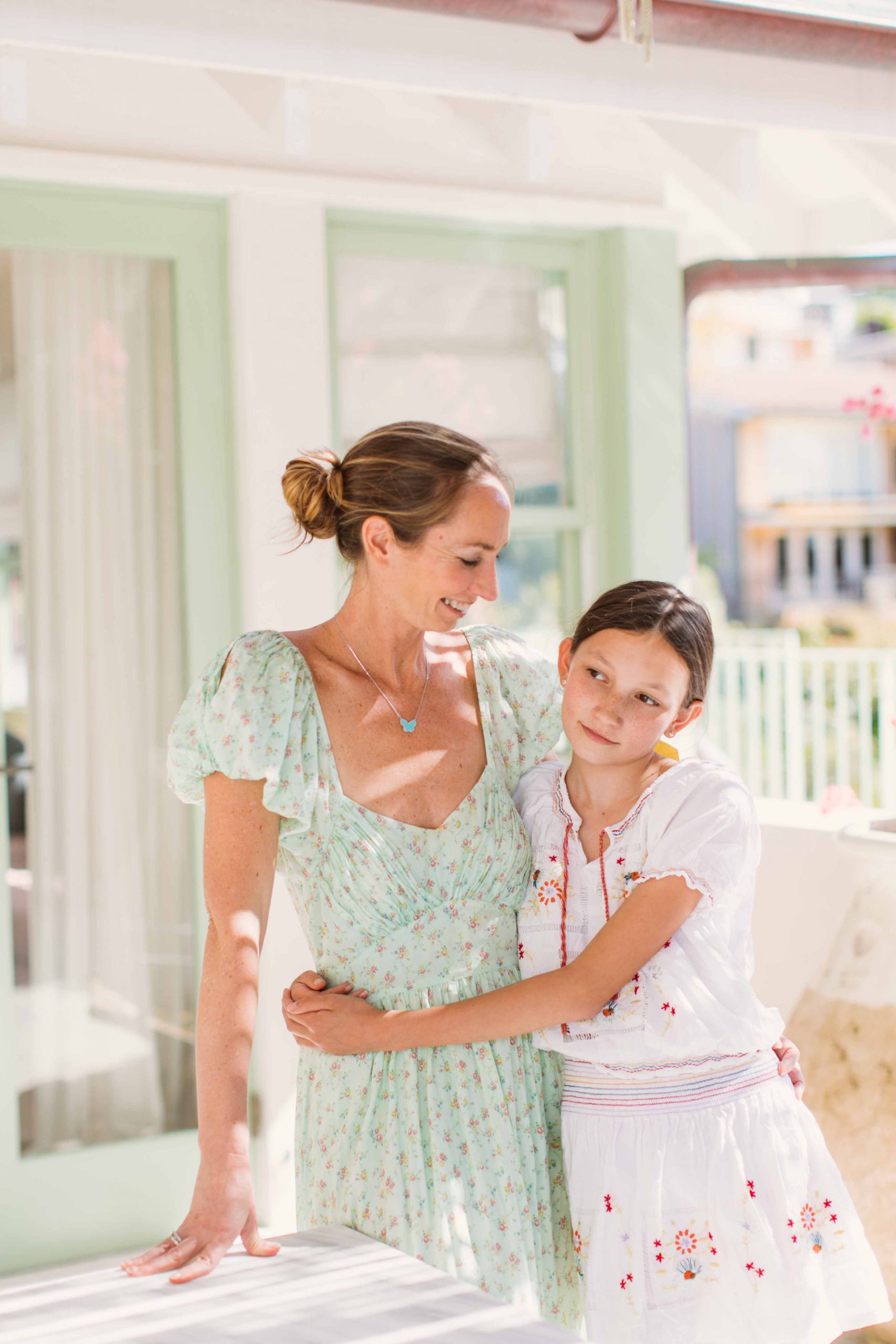 Did you feel a loss of identity after you shut the business?

There was initial relief, then yes there was definitely a loss of identity moment/period of time where I literally was like ok what next. It really made me question what was important in life I did a lot of soul searching and it was one of my old and wise friends that reminded me of Eckhart Tolle’s words. She said to me: ‘Heidi we are human beings not human doings’. I had felt like if I wasn’t constantly doing, I was worthless. These words took a whole lot of unnecessary pressure off.

What was the most challenging part of running a fashion business?

Designing a line and prints and organising the shoots and even selling the clothes is the easy bit. It is getting them manufactured to your specs and quality expectations and then actually delivered in time which is the hard part. Then there is managing the returns – unfortunately it’s just the nature of the fashion business. I vowed in my next business I would design a product or service that could not be returned.

And what did you learn about what women want from clothes?

They want flattering easy to wear and versatile clothes that are comfortable. 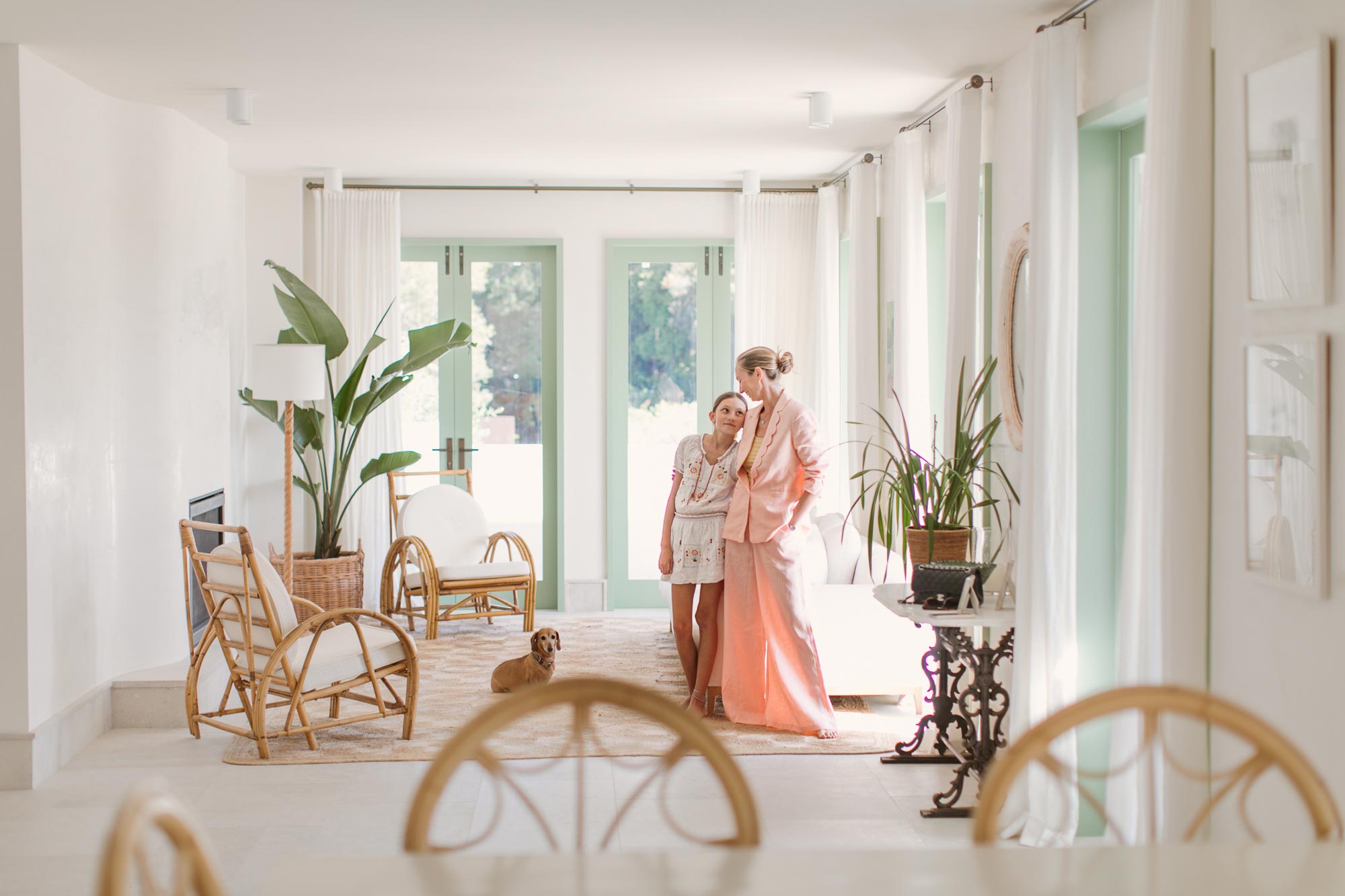 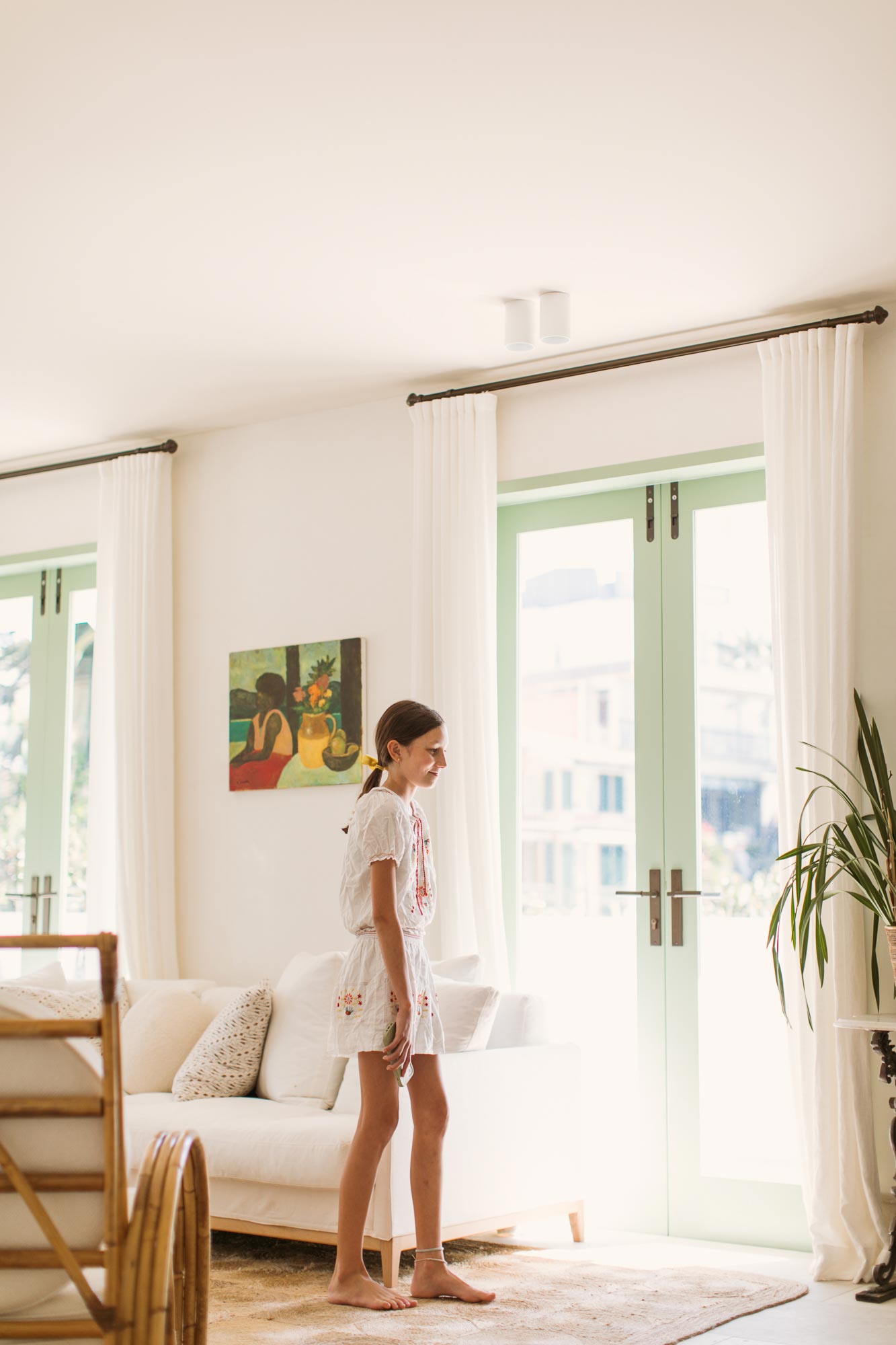 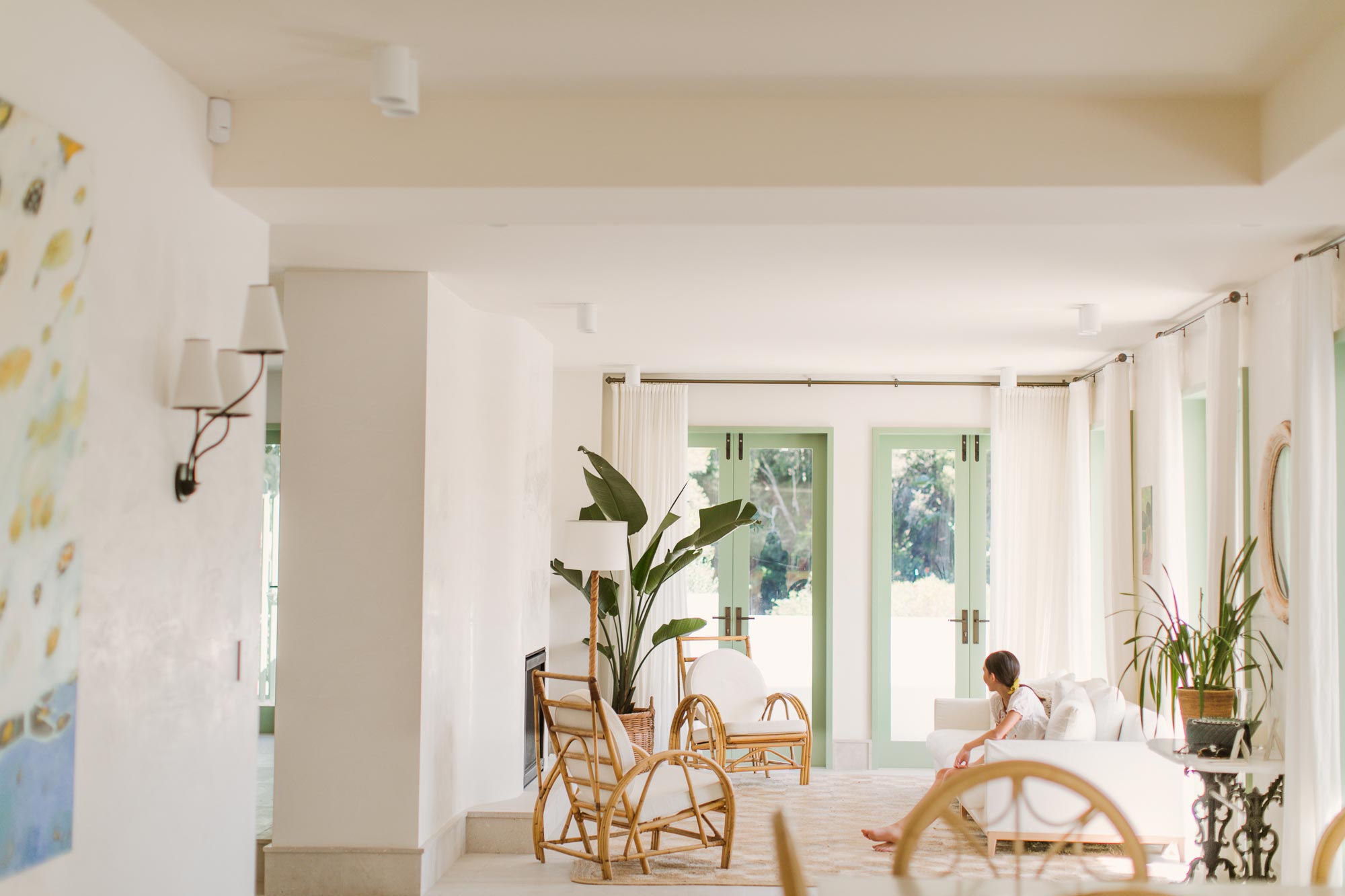 To women who dream of running their own business, what’s your advice?

Go for it. I am so glad I did it, but know that once it starts it’s hard to stop so build your business in a way that will allow you to have a break because everyone needs a break, especially as a mum with a young family.

When I interviewed Pandora Sykes, she talked about the importance of knowing when to quit. How did you know it was time?

Mentally I was waning and then when my supply chain started breaking down beyond my control, I was like ‘ok I think this is a sign its time’.

You’re moving soon – tell us about your next adventure and where you are off to?

Good question as we don’t have any firm plans – we have rented around the corner and will be on the lookout for a new project whether that be in our current hood or Byron Hinterland. We will see what comes up. We have a partnership in a building company Verdecon so the idea of doing another reno or build is quite appealing. We also have a place down in Melbourne so that the girls will hopefully want to see us on the weekend as they will both be down at school in Geelong so we will be all over the place! Which after two years of being locked down is quite a luxury.

You’re the mother to two girls – how would you describe raising teens?

Hard! But oh so rewarding. I now know there is no set way to raise teenagers. You need to be flexible and have a lot of intuition and what may work for one daughter does not work for the other one. All you can be is the best example to them as boy are they observant and judgey! 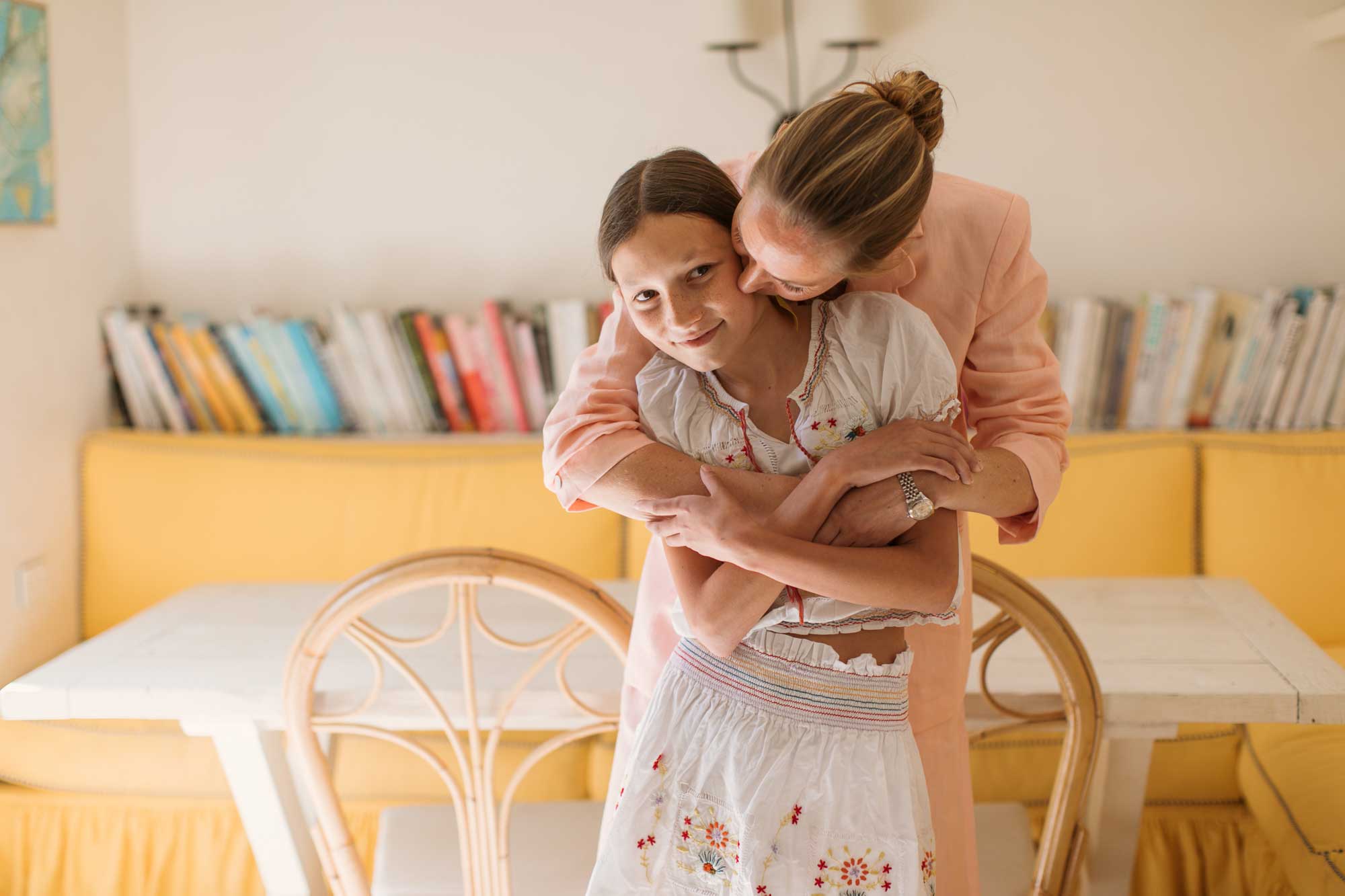 Looking back, how is it different to toddlers and babies?

I don’t think it’s that different at all – they very much model off your behaviour but obviously it’s easier once they are older as you can have heart to hearts with them and reason with them – this wouldn’t go down with a toddler!

Your eldest daughter is away at Timbertop – as a mother, how have you navigated letting her go and become more independent – something we all need to do eventually!

Gosh it has been so hard given letter writing is the only form of communication, but this has been such a beautiful and intimate way to communicate. I think it has brought us closer and seeing the emotional growth, resilience and independence that has evolved – it’s honestly been the best decision we ever made and Ella also has the same sentiment that it’s hands down the best year of her life. When we said our goodbyes at drop off at the start of the year, I thought I would be rocking in a corner but instead I was just grateful that we had the incredible opportunity to send her there to be in nature for a year without any access to technology. It was the best time and best place for her to be. As parents, we want to raise independent and emotionally balanced children so as much as we have missed her, it has been well worth it.

Your interiors are very joyful – how do you approach interiors and tell us about your current home and how you’ve decorated it?

Colour plays a big role in my interiors. I try to have a neutral base so that I can inject colour in through art and upholstery. I am very much drawn to European style architecture so we drew inspiration from the Amalfi coastline to Spanish style Finca’s even colonial era architecture from Mustique. We used my good friends Gillian Khaw and Tania Handelsmann of interior design firm Handelsmann and Khaw as we were actually in Singapore during the reno – they knew exactly what we were after and did the most incredible job. It was really hard to sell that house as we put so much into it but as I am often reminded it’s not the bricks and mortar that matters it’s the memories you make and friendships that you make that brings you the joy.

Finally, over a decade into motherhood, what does being a mother mean to you?

The meaning of motherhood and my attachment to it has had a huge shake-up this year given both my girls will be boarding in Geelong next year. I am gradually finding peace with it as it definitely wasn’t ever on my cards as my planned motherhood journey but it’s what my girls were drawn to. They wanted a co-ed education and were both very keen to board and seeing how happy Ella was it was very hard for us to pull them out of that and say no you are coming home. So, motherhood to me is about being the best example of a human to them, loving them unconditionally and always being there for them and having fun with them. It’s the most special feeling in the world to me.