The Tale Of Sabine Getty

Home » The Tale Of Sabine Getty


As we all settle - or, perhaps, unsettle - into our new normal of self-isolation and social distancing, the news is increasingly bleak. And in the face of our uncertain reality, we're seeking colour, beauty, and simple pleasures. One of our favourite stories from 2018, the Tale of Sabine Getty delivers in spades. She is as vibrant and playful as her spectacular home, enviable wardrobe, and unique jewellery designs (inspired by one of her daughter’s bright geometric toys). And with Sabine’s unshakeable positivity, and belief in keeping things simple, we felt there was never a more apt time to revisit this Tale…

Luxury jewellery designer Sabine Getty is getting her 17-month-old daughter Gene to climb on her back – much to the delight of The Grace Tales team.

Poised and self-possessed, there is also a childlike-thinking that is spontaneous to Getty.

“Growing up is not so interesting to me,” explains the 33-year-old. “I think the way I see the world is more through the eyes of a kid.”

Her latest jewellery collection, Big, named after the Tom Hanks movie classic, was inspired by a colourful geometric wooden toy belonging to her daughter, which she has transformed into pink, blue and yellow sapphires and tsavorite pieces – bringing a light-hearted air to the serious world of fine jewellery.

To star in the campaign, Getty invited some of her favourite mothers and their children – shoe designer Charlotte Dellal and her son Guy, model Jacquetta Allsopp and her son Sam, and art dealer Monika Sprüth and her daughter Paolina. “They are all good friends of mine and people I look up to and admire for who they are and what they do,” she explains.

“Charlotte is an incredible mum and a great businesswoman who just had a boy, Monika is such an incredible, strong woman and her daughter has so much character so I wanted them to be in the story as well. It really is all about personality and character over anything.”

An element of theatre permeates all elements of her brand. She grew up between Geneva, Beirut and the south of France, with aspirations of becoming an opera singer (although she no longer sings). “Thank God for my family I don’t,” she says. “Just to my daughter – she can’t complain yet.”

She found her vocation at New York’s Gemological Institute of America (GIA) creating her luxury jewellery line in 2012, which is now worn by everyone from Kaia Gerber to Rihanna. Music may no longer be a focus, but home with her husband Joseph Getty, a financier and descendant of the Getty oil dynasty, is a symphony of colour. Their three-bedroom Mayfair apartment (previously owned by Sir Paul Getty) behind the Ritz and overlooking Green Park is a zesty homage to the Memphis movement founded by Ettore Sottsass in the 80s.

Her mother, Egyptian interior designer Karine Ratl, was an early fan and a pair of asymmetric ‘Flamingo’ side tables designed by Michele De Lucchi once flanked Getty’s bed while growing up. There is a magnificent use of colour. From the ‘hamburger’ sofa – so named by her husband because of the cheese, lettuce and ketchup colours which complement the painting by artist Andre du Besset behind it – to the tangerine dining room with shots from Sabine’s Memphis jewellery collection and the blue kitsch kitchen with handpainted tiles and coloured glass doors. It is unique and original – like the huge Getty Oil sign that the couple discovered by chance at a Providence gas station.

We caught up with the inspiring designer, socialite, and mother to discover more about her style, her approach to parenting and her childhood memories. 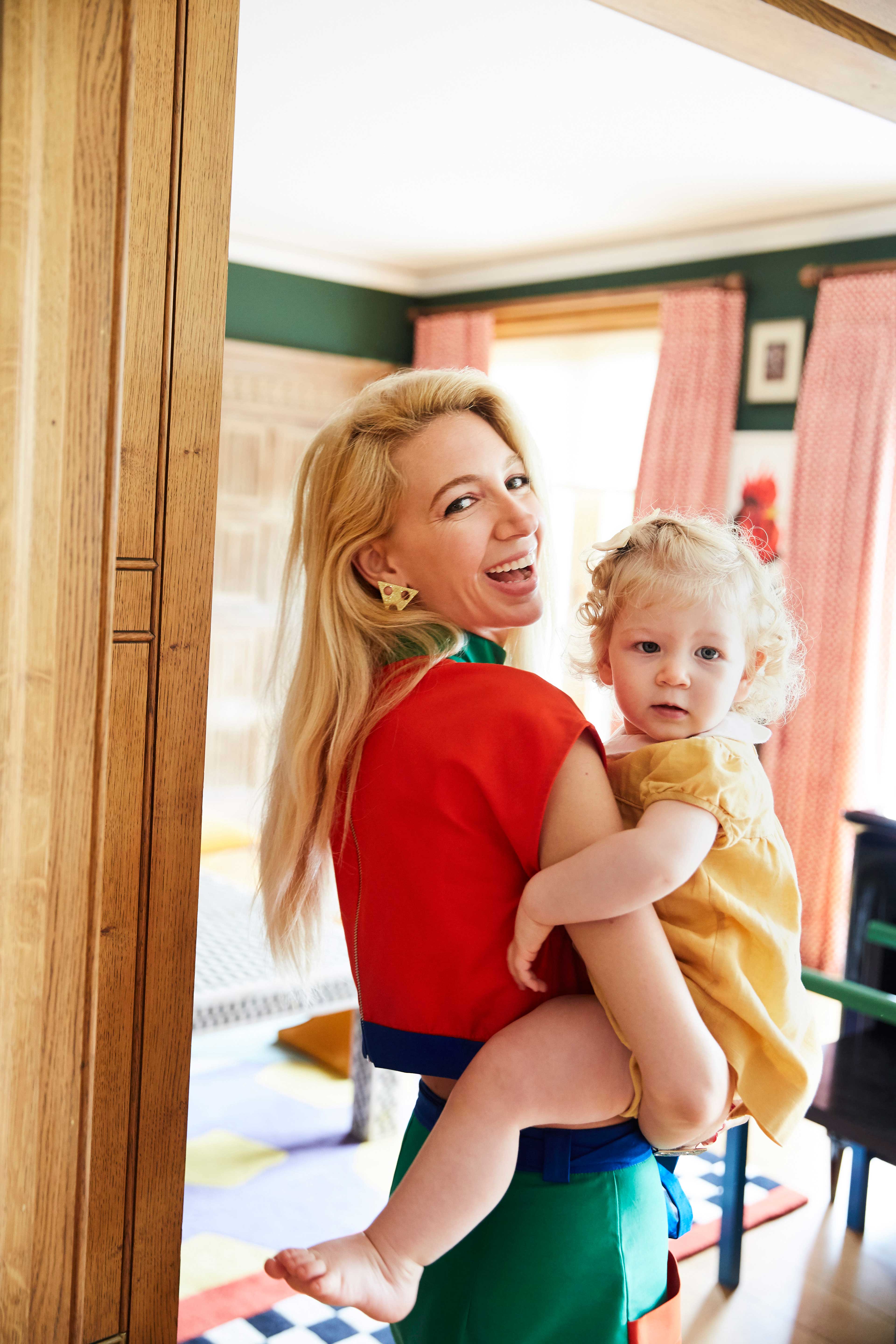 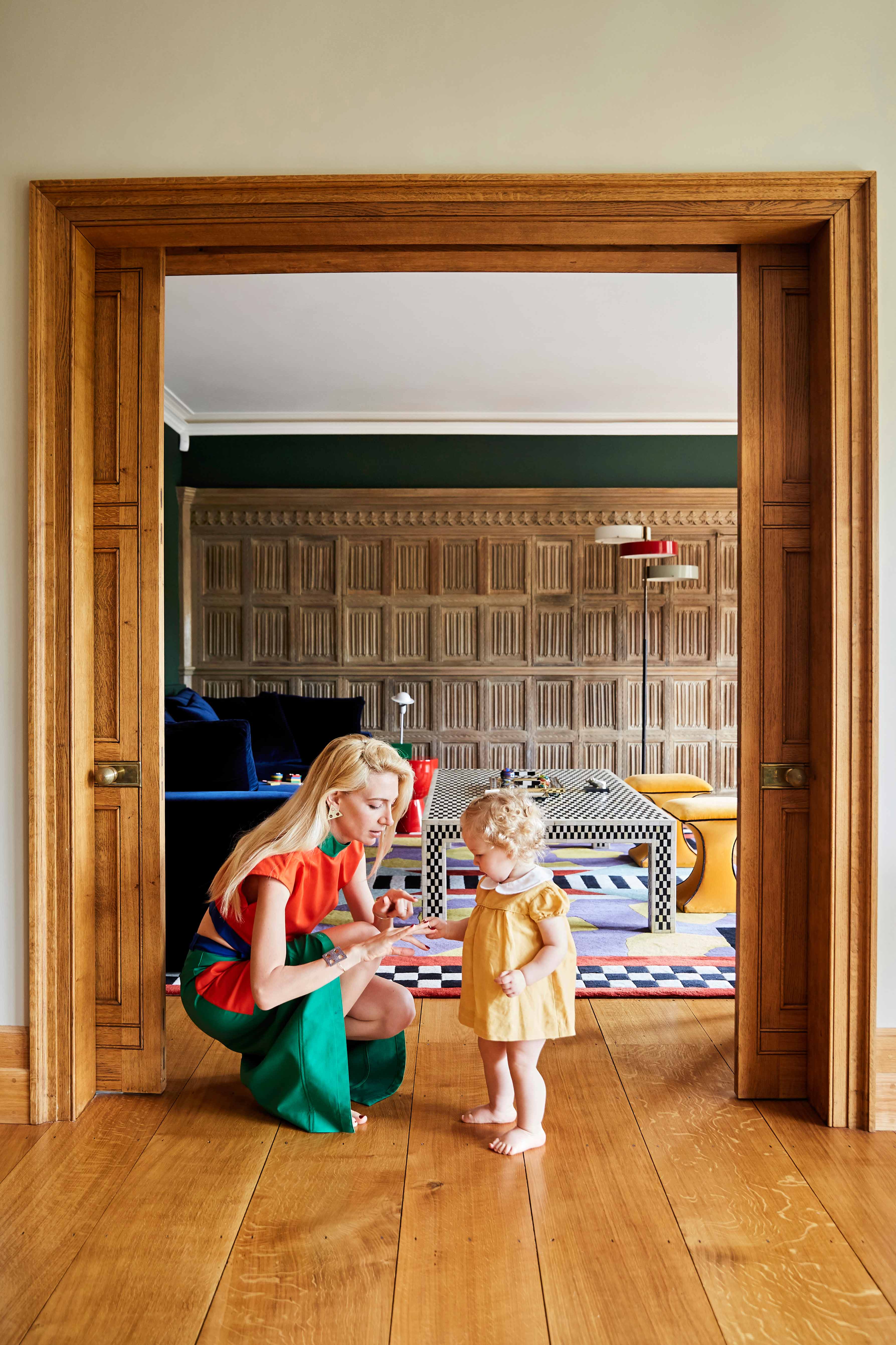 What inspired your latest jewellery collection?

I was playing with my daughter and I had bought her these geometrical shaped wooden toys in primary colours. I raised two of them next to her face like earrings and I was like, ‘Oh my God, they would look amazing’. Straight away I started drawing them. That is where the idea came from – so it’s thanks to her.

And why did you name the collection, Big?

It has always been one of my favourite movies because of the piano scene, Zoltar and the magical idea of a little boy trapped in the body of an adult who has to behave all grown up. We are all kids inside, that is why he was so creative, so free and so brilliant and that was one of the messages I wanted to come through in the jewellery – that we all have a childish, very creative, dreamy part in us. I wanted people to reconnect with that side, especially because jewellery is something taken quite seriously.

Do you ever feel that you too are playing at being ‘grown-up’?

Constantly. That is why I can relate so much to that film. Another favourite movie is Mary Poppins and even when I designed my wedding dress I wanted to look like a Disney character.

How do you channel your inner child?

In every way. I think it’s a certain innocence and naivety to things. I’m quite simple – that is the best way to put it. I look at things in a more simple way. I look at the shapes and the colours for what they are – it makes you more creative to see everything as if you are seeing it for the first time. I can’t help it – it’s hard for me to describe how as it’s who I am. There is something that’s just not quite grown up in me.

Did you find motherhood came quite naturally to you? Were you given any good advice when Gene was born?

Yes, it came very naturally. I didn’t want to have much advice I just wanted to live it and experience it and learn to really use my instinct and intuition and it was great. I didn’t really feel like I had that many questions to ask.

Was your mum very present?

She was an amazing help when my daughter was born. That is when you become very grateful (to your mum) when you have a child, it reconciles a lot of things with her.

What do you admire most in your mother?

That she is a very genuine person. She is true to who she is. I have never seen my mum being fake to anyone – she has integrity, that is what I admire.

Is that something you have inherited?

Yes, I think I have and it is almost a problem because you can really read my face straight away. I cannot pretend even for a second but I think it is a great strength as well because I don’t even have an option to not be myself and be completely true to who I am – like it or not. 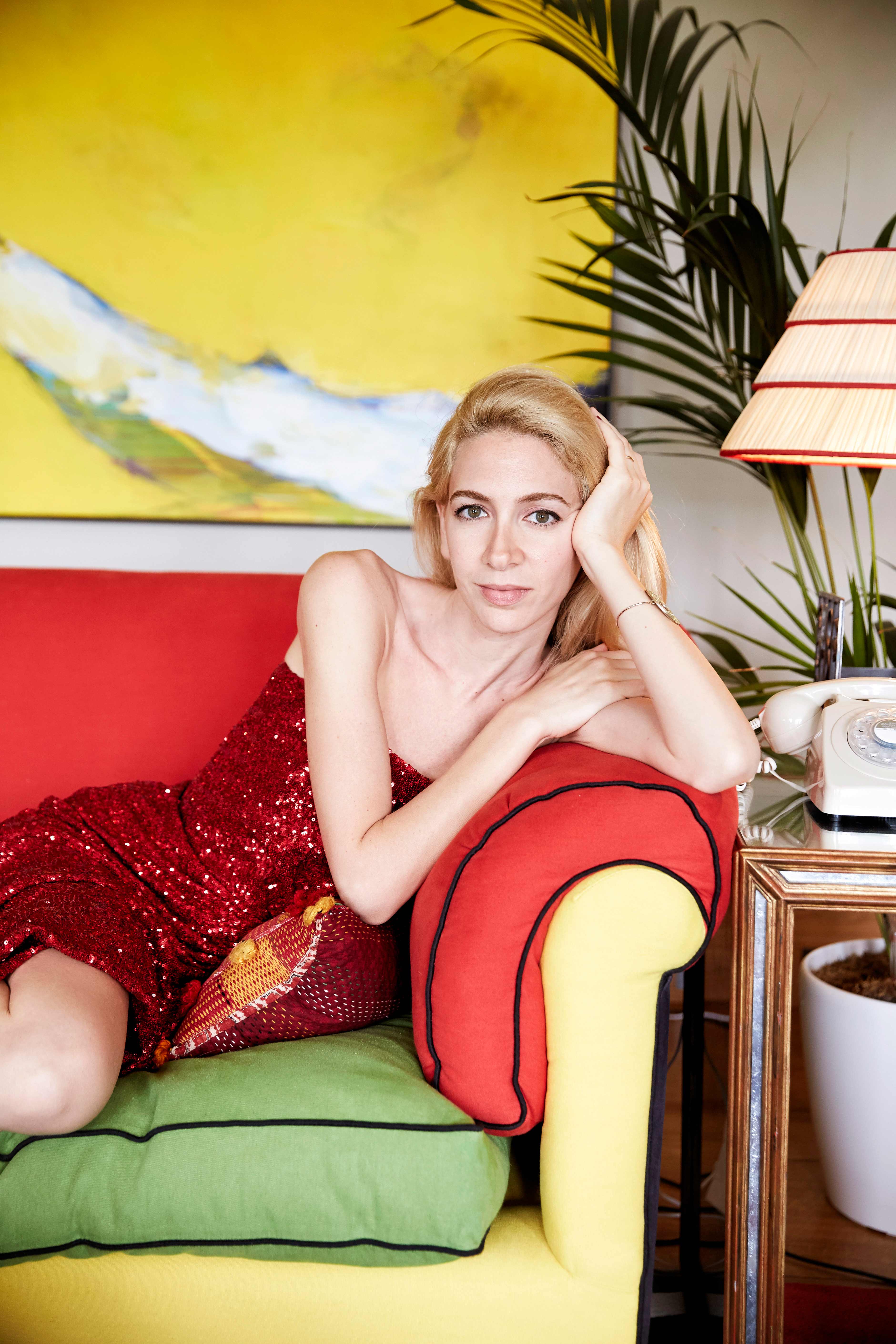 Can you tell us about your childhood – what do you remember most?

I remember nothing. I have the worst memory ever it is so bad. I actually only remember through music, movies, objects and colours – that is probably why I love Memphis so much and I love cinema because it reconnects me to things I have seen growing up.

Is this since becoming a mum?

No. I have always had a terrible memory.

Your mother was an interior designer – what was your bedroom like growing up?

My mum had so much Memphis furniture when I was a kid so I grew up surrounded by that. I was all about fantasy. I remember at some point I wanted to have a bed that was two metres high that I could walk under and she was like: ‘Sure. Fine’. We drew the design together. It was an amazing bed. It had to have a stairway to go up and four floating columns with curtains so you had this whole play area underneath. It was very much a dream room.

What did you want to be?

A singer for sure, I wanted to be some sort of singer/superstar. And then it became opera. I did opera lessons and I wanted to become an opera singer. But it was so hard. I have always loved drama and theatre and all of that world, that is why I like to bring it into my jewellery, I bring in characters, almost like characters of a play.

I was very extroverted and very much the little leader of the group, I would drag all of my friends to see Hair the musical four times in a row and do dancing and films – I was really creative. At 15 or 16 I became a very shy, insecure teenager. I had a very insecure period but at the core, I was a very happy extroverted person. And then I had to find myself back in my 20s – I am sure it happens to a lot of girls. I did a lot of work on myself. I just looked inwards. I realised I am not how I used to be and I tried to work on myself.

What have you learned about yourself since becoming a mum?

Love – to love and connect with the ability to give love and to be more tolerant. It has made me realise it’s not easy being a parent, everyone has their struggles that we don’t know about. 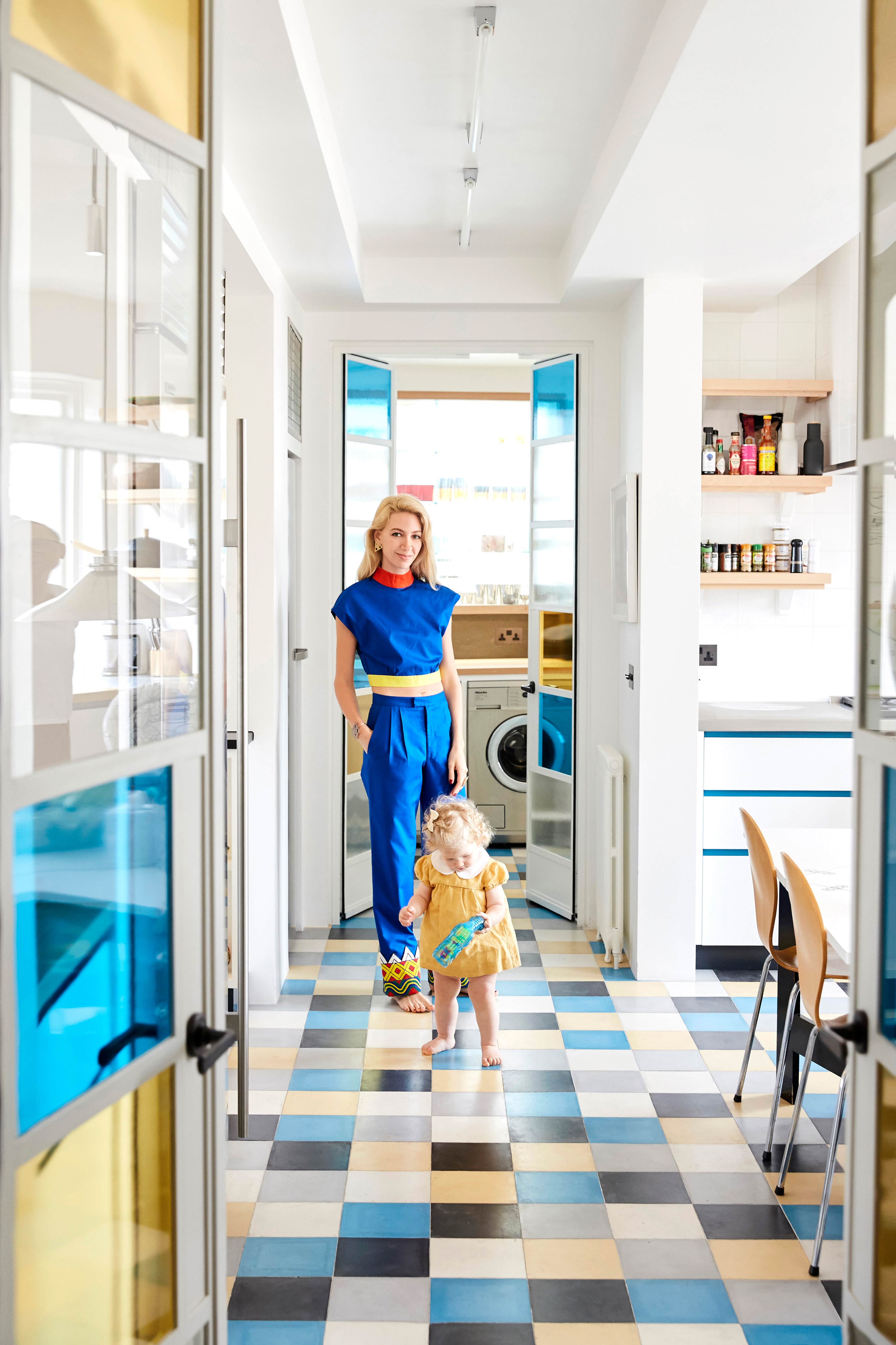 What has surprised you?

The amount of love – I didn’t know it was possible to have that amount of love inside of oneself. I’m like a river, a cascade of endless flowing love for her. I have no idea where it comes from. It’s insane to know that you have all of that inside of you.

But do you find it hard?

I’m lucky, I remember nothing. Again I only remember the good times – it’s so worth it.

How do you juggle being a mum with your business?

I have it very easy. My office is above my flat so I can come in and out and right now my daughter is my complete priority. She has helped me be creative. She was very involved in my creative process and also in the pictures – it’s not that difficult. I don’t like to be away from her so I make arrangements so that I am never away and if I have to be, I cancel the plan.

Has your perspective on business changed?

No it hasn’t. I like to have the direct link from my website to customers, it’s much easier and they like it too as they can make changes to the colour and stone. They like having a direct relationship.

Has your style changed since becoming a parent?

Not really. When I am at home I am extremely casual and when I have to go out, I am extremely glamorous – it’s like two ends. For day I wear a T-shirt, usually James Perse, jeans by Re/Done or Brock Collection and Superga shoes. For evening, I like Alessandra Rich, Mary Kantrantzou, Emilia Wickstead and Saint Laurent.

How do you encourage Gene’s creativity?

She is so creative she doesn’t need encouragement – everything is interesting. She is extremely curious – she can have fun with a key, doorknob, anything is a potential toy – it is more that I learn from her.

And finally what in your wardrobe would you like Gene to inherit?