The Tale of Silvana Azzi Heras 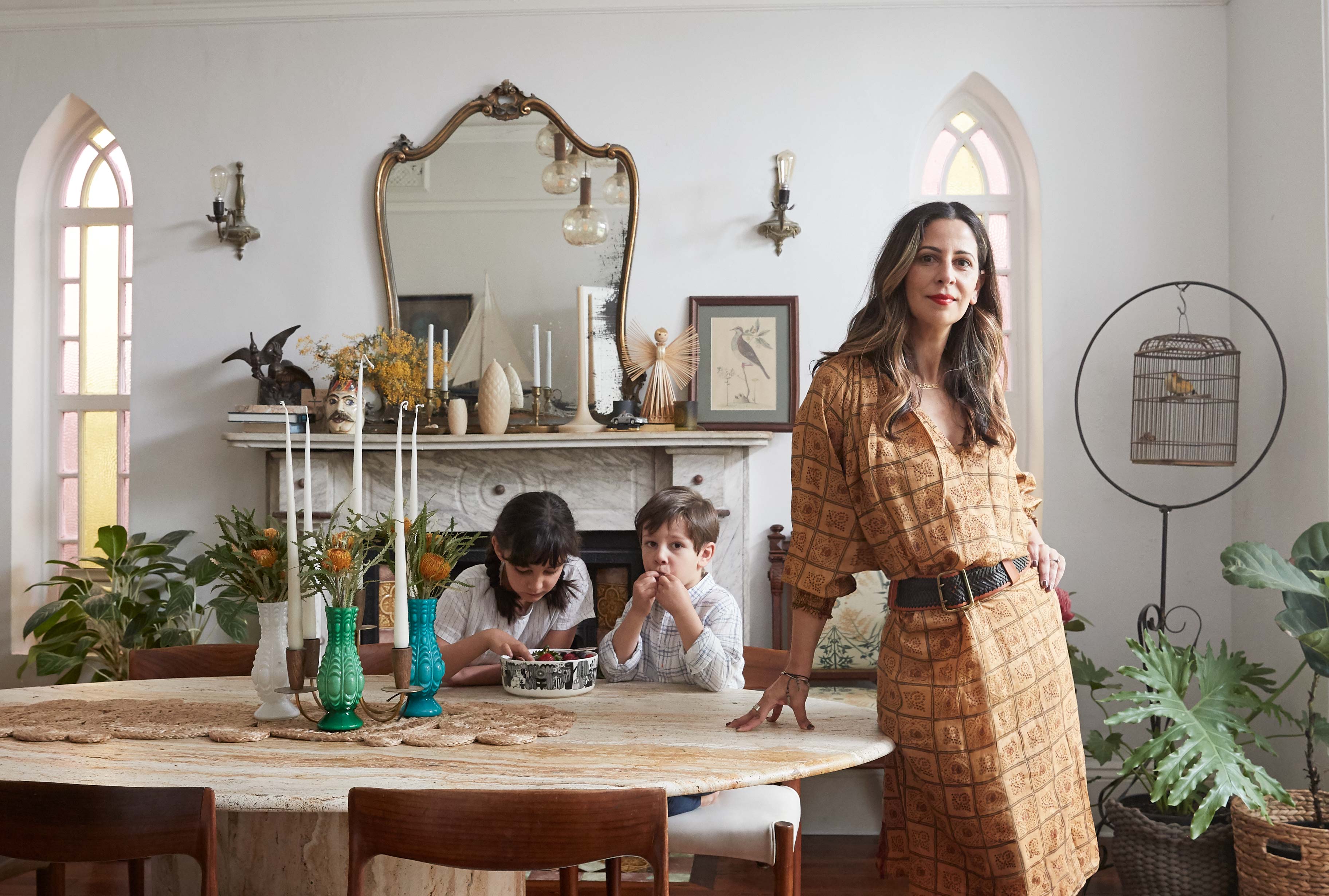 When Silvana Azzi Heras arrived in Australia from Lebanon, her mother worked in a factory in Sydney’s Summer Hill sewing womenswear. As a child, she’d sit with her mother and experiment with different fabrics, colours and techniques. “I would design and mum would sew,” she recalls. That creativity has carried through to adulthood. “I’m a very visual person, constantly focussing on patterns, colours and beautiful typography. It is all about symmetry for me, it makes me feel happy and at ease.”

It was during university, while she was working at David Jones in the men’s shoe department, that she received a call from renowned costume maker Catherine Martin. She needed a design assistant during post production of Romeo and Juliet. “I’m so happy to have picked up that call,” she says. That call led to her first role at Bazmark Inq, a role that, over 17 years, saw her move from design assistant to head of design for the company, and allowed her to work with Martin, her husband Baz Luhrmann and an amazing group of colleagues and collaborators around the world on a number of iconic projects. She worked on films such as Moulin Rouge and most recently The Great Gatsby where, as assistant costume designer, she won her first Australian Production Design Guild (APDG) and Australian Academy of Cinema and Television Arts (AACTA) awards. The Great Gatsby also received an Academy Award and a BAFTA for Costume Design. “There have been so many memorable moments,” she says. Moments such as going to the Cannes Film Festival in 2001 and 2013 when Moulin Rouge and The Great Gatsby opened the Film Festival. Or there was the time she worked behind the scenes as the assistant costume designer to Martin on the Academy Awards show with Beyonce and Hugh Jackman. Or attending the Baftas and Oscars with Martin for The Great Gatsby.

Yet it was another side project at Bazmark Inq which inspired her next move: the creation of Catherine Martin’s CM Home business. “It opened my eyes to where I wanted to focus my attention for the foreseeable future. During the formation and commercialisation, I worked closely with Catherine and a small team designing wallpaper, fabrics and rugs, collaborating with Mokum Textiles, Designer Rugs and Anthropologie. I’d built a career off designing things that were beautiful to look at, but the way the decorative arts forced me to consider both form and function was an epiphany. From there, the seed for House of Heras was sewn and, well, here we are,” she says.

Her textiles brand House of Heras began when she was invited to design the Emirates Melbourne Cup marquee a few years back. The theme was Australia. “This allowed me to start the House of Heras “Australian” range where rugs, wallpaper and cushions were designed for this marquee,” she says. She launched the House of Heras rug range through Designer Rugs last year. Currently, the range includes cushions, linens, wallpapers and rugs. What’s next? “There is an exciting collaboration that I can’t say much about yet with a US company that will be launched in the Fall,” she says.

We caught up with the unstoppable creative at her spectacular home in Sydney to find out more about her career journey, her family life and what 2020 has in store. 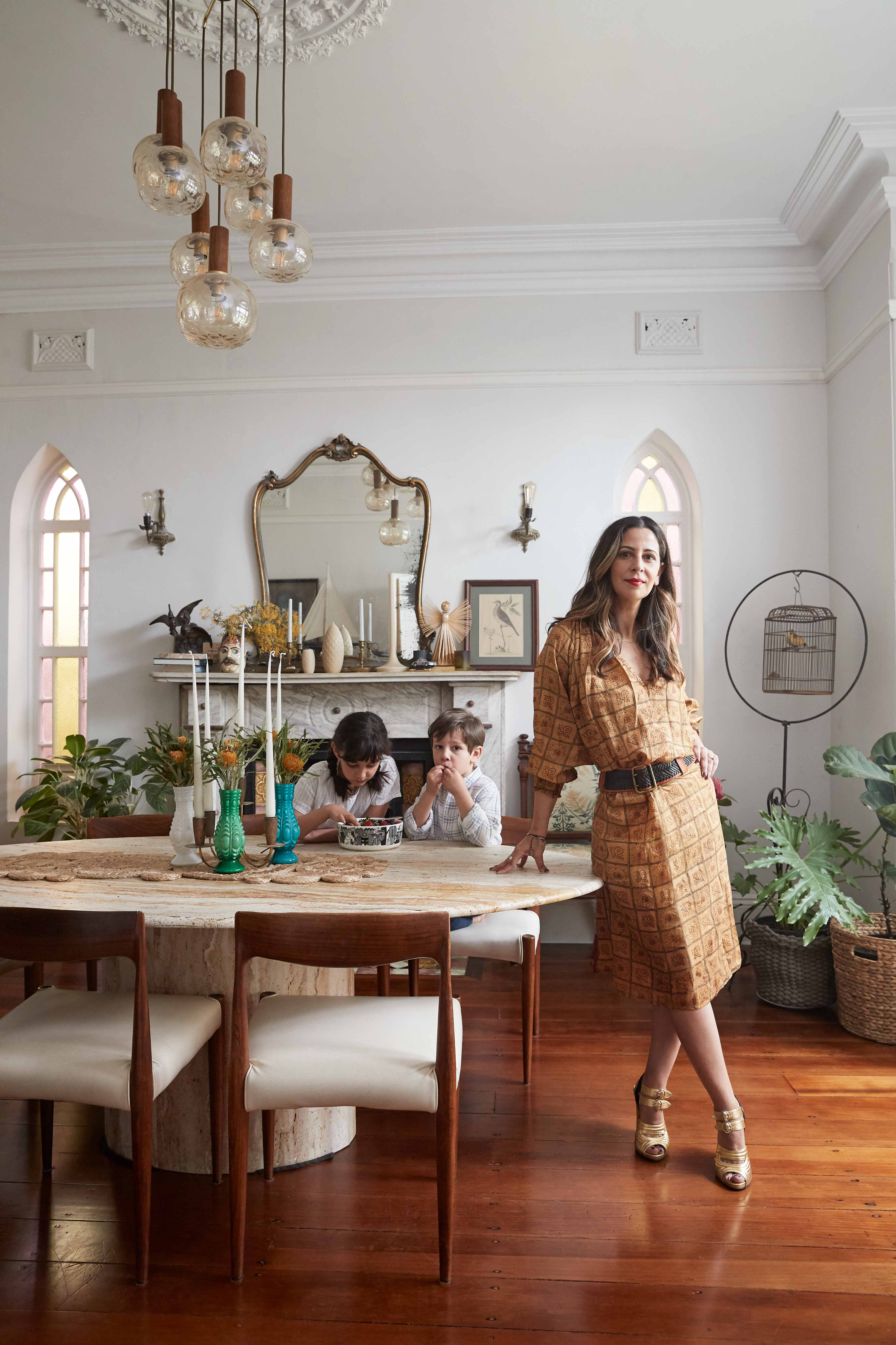 How has travel influenced your work?

I find travelling to be the best way to re-energise and refresh your creative juices. It resets the brain and declutters all your ideas. It allows me to focus and realise what I want the next range to look like.

The architecture, fabrics, food, smells and people all contribute and inspire me. I also love taking photos of different skies, trees, flowers, details and try to capture the vibe of every place we visit.

Tell us about the beginnings of House of Heras?

I was invited to design the Emirates Melbourne Cup marquee a few years back where the theme was Australia. This allowed me to start the House of Heras “Australian” range where rugs, wallpaper and cushions were designed for this marquee. I launched the House of Heras rug range through Designer Rugs last year.

And what does the future hold for House of Heras?

So as well as our Australian designed and made cushions, linens, wallpapers and rugs, I am currently working on something more wearable, whether it be a kimono or swimwear. I am also working on our next range, which will be something different to our first Australiana collection.

Also there is an exciting collaboration that I can’t say much about yet, with a US company that will be launched in the Fall next year. How has the interiors market changed since you launched?

I see the interiors market saturated with patterns and bold colours, but I don’t think there could ever be enough. There is something for everyone, and I love how our unique Australian flora and fauna are being interpreted by many designers.

Collaborations are happening all over the place and they are what excites me the most. Two creative minds coming together to create something really special and extraordinary. It is not about competition, it is about sharing the love and helping each other bring out the best.

What have been some of the most memorable highlights of your career – what do you look back on and think 'wow'?

So many memorable moments but the ones that stand out would have to be going to the Cannes Film Festival in 2001 and 2013 when Moulin Rouge and The Great Gatsby opened the Festival. I also loved working behind the scenes as the assistant costume designer to Catherine Martin on the Academy Awards show with Beyonce and Hugh Jackman, and attending the Baftas and Oscars with Catherine for The Great Gatsby.

What traits do you think makes a creative successful?

Believing in your vision and having something to say, staying true to your style and aesthetic, being authentic and producing work that is timeless.

And what traits do you think can hold creatives back?

Being a total perfectionist, and procrastination. Just do it but try not to compromise on quality of design and outcome. 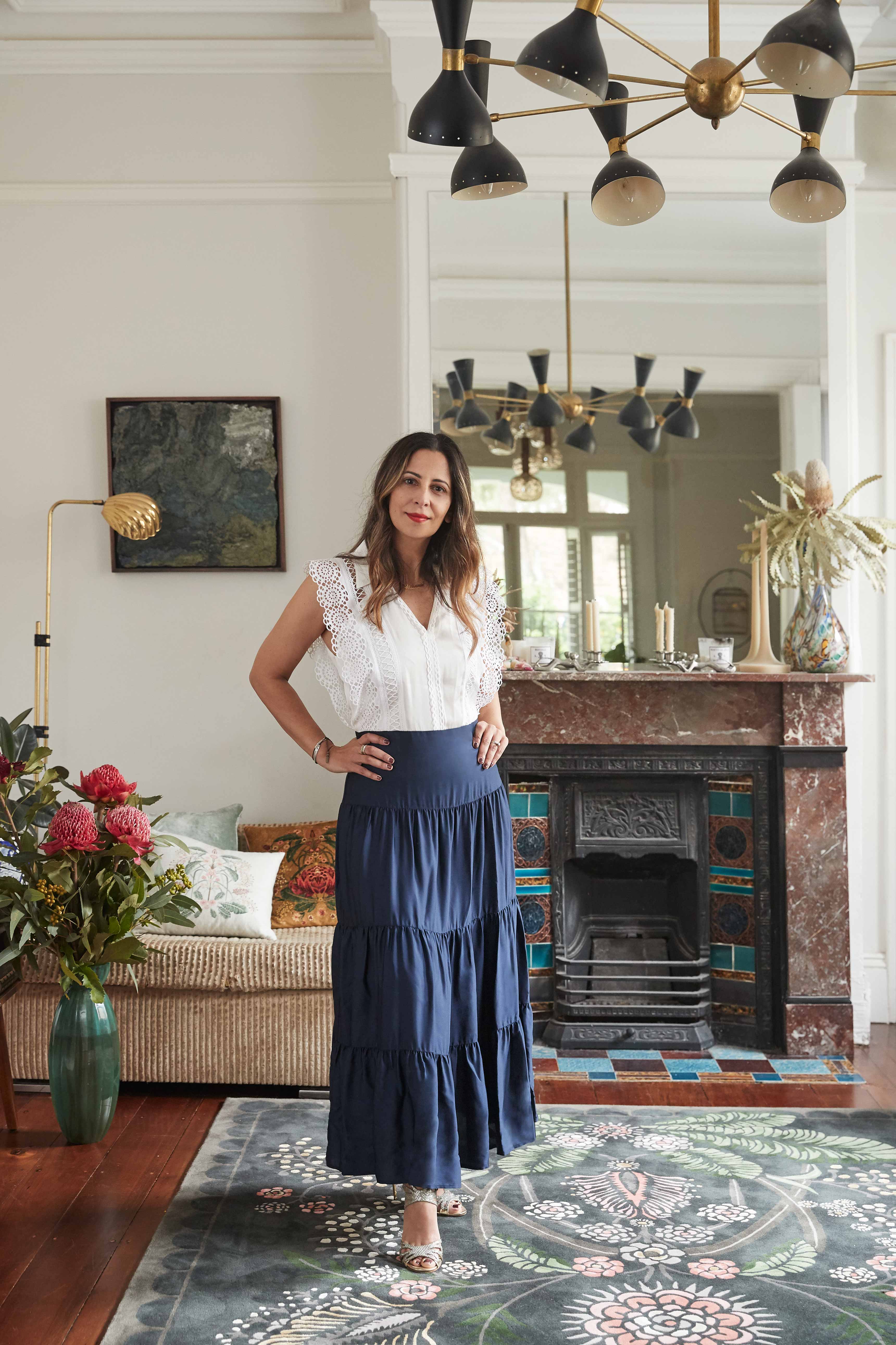 What is your life motto and how do you try to live by it or incorporate it into your life?

Just start today. There are so many times I have wanted to leave things until tomorrow but if you just start today, it is the first step to getting anything done. Also, take risks and learn from your mistakes.

What are some practical tips you have around time management?

Having a home office has been my saviour – creating a space for myself that is filled with light and inspiring. As soon as the kids are out the door in the morning, I’m upstairs working. Sometimes I stay in my PJs until just before school pickup when I shower and run.

Can you tell us about your motherhood journey? What has been the most challenging stage, and the most rewarding stage?

I think the most challenging part was the first year where they are relying on you for everything. I would sit there breastfeeding and think of all the things I could be doing – designing, producing, cleaning, showering, eating.

But looking back on those times, it was the forced reality check that I needed to slow down and focus on these amazing little people we have just created. As they both get older I’m starting to see traits from both my husband and myself in them and it fills me with joy. Having my daughter being so proud of her mummy, and my son wanting cuddles all day every day, makes me want to be the best version of myself. I also have the most incredible husband who is very hands on and supportive in every way.

If you could go back to before you became a mother, what would you tell yourself?

Nothing can prepare you for motherhood. Also, be patient with other mothers out there because one day that could be you. 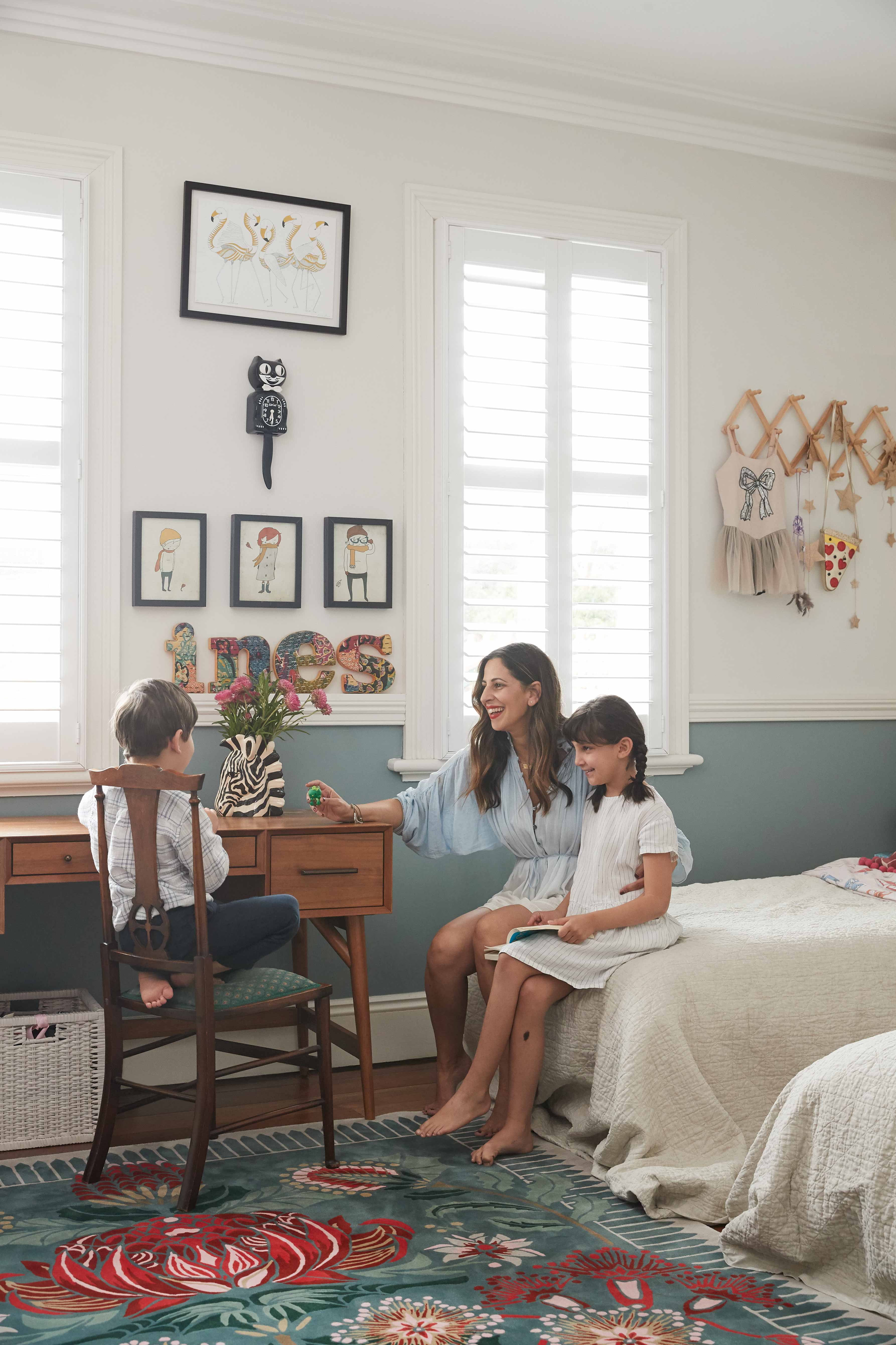 How did having children impact the way you felt about work or your career?

Something always has to give for working mothers – what has it been in your case?

I don’t think I could go back to full time work for a while, so being able to freelance and work on my own brand has really helped.

Keeping a house beautiful with kids isn’t always easy – how do you approach this?

This is very hard. I’m a bit of a hoarder but it is also disheartening to clean a space only for it to be messed up by the kids in a matter of minutes. So my husband’s motto is “there’s a place for everything, just put it back where it belongs.” The house is the cleanest when the kids are asleep. 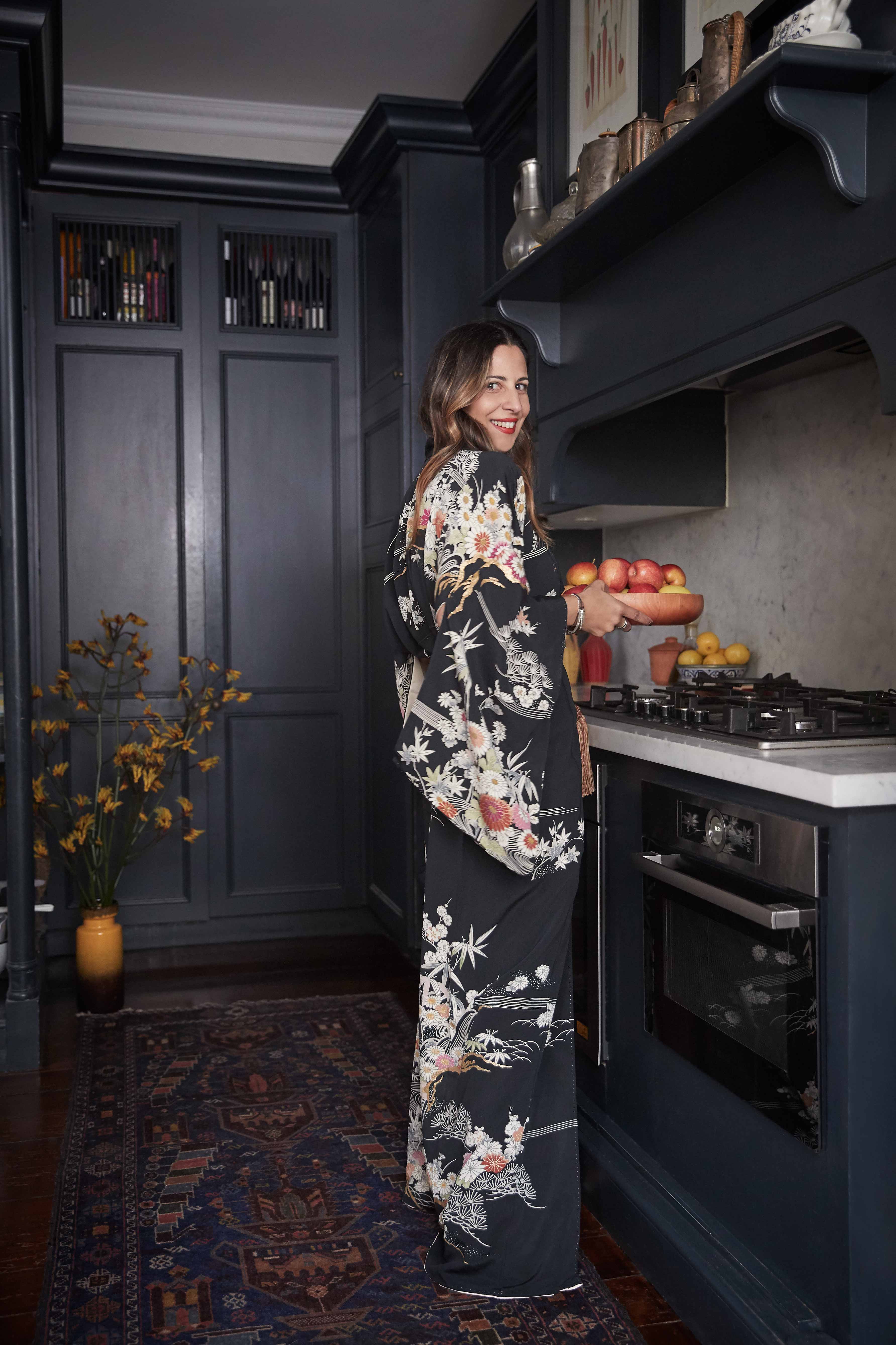 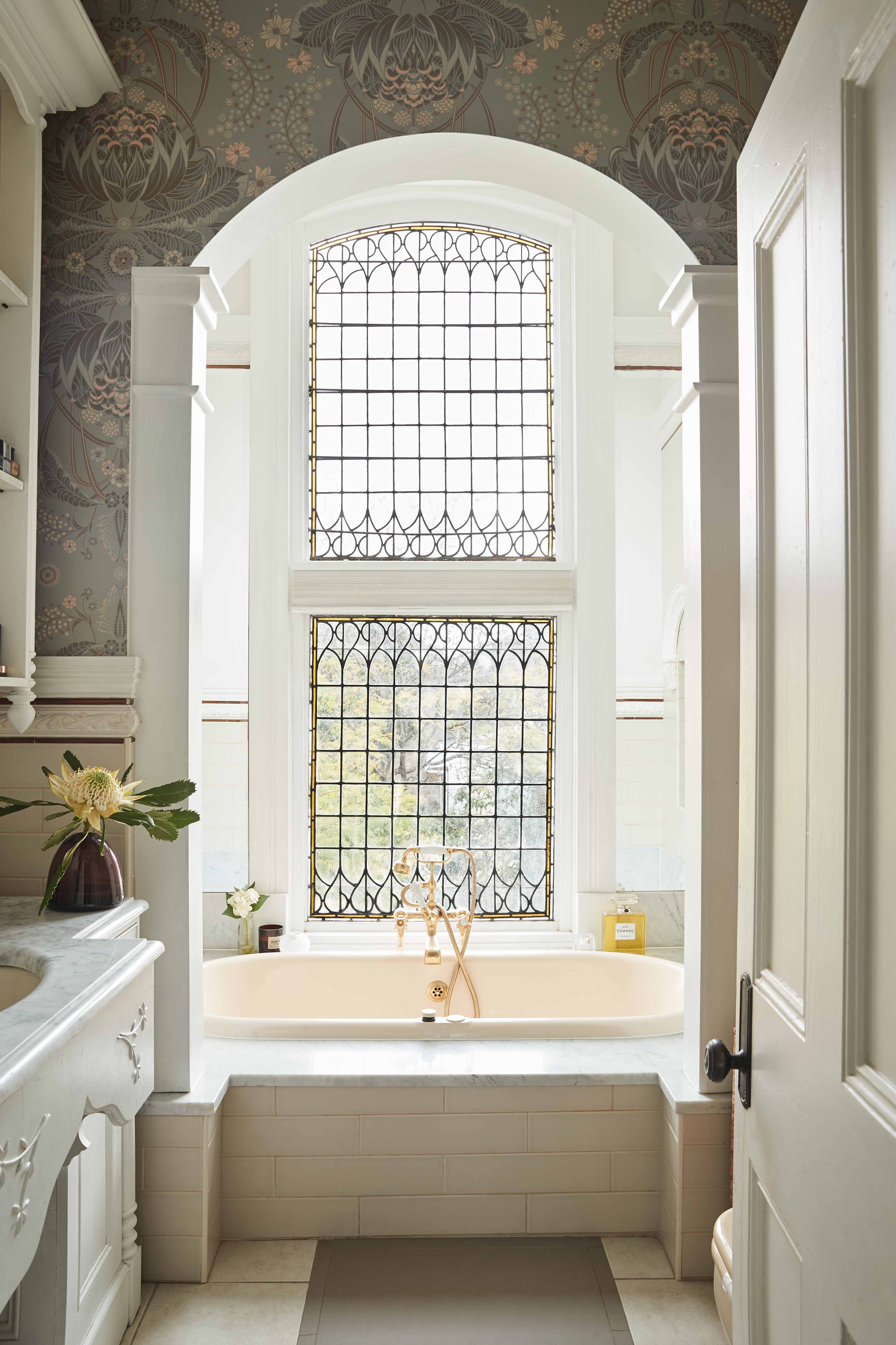 What makes a dreamy room?

A well lit room, preferably with natural light with super high ceilings. Mixing in patterns with neutrals, as well as adding in special pieces that you have designed or purchased on an overseas trip, combining the old with the new. Having corners of interest and pops of colour with inspiring pieces of art on the walls.