Their pathway to parenthood was a little unconventional. Spencer is a transgender man and baby Alexis’ birth father. He carried and birthed Alexis a decade after transitioning, which required him to cease all hormone treatment. After five years of IVF treatments, Spencer says, “Alexis was the only viable embryo from our very last attempt. He really is a miracle baby.”

It’s hard to believe only a month ago, the Gay and Lesbian Mardi Gras lit Sydney’s streets up in a riot of colour and celebration. Those same streets are now stark and empty, as we self-isolate in the face of the coronavirus pandemic. But while the glitter has well and truly settled, the message of pride remains just as important. And as we all move to an even greater online presence, representation matters more than ever.

So when Spencer and Kelly were invited to participate in the Bonds Out Now campaign and exhibition, a “celebration of Australia’s diverse and unique LGBTQIA+ community turning a common fashion phrase into an expression of pride”, they decided to dive in. “I think after having Alexis I had such a strong sense of pride in what I had achieved. I think that’s what motivated me to go through with the project, even in the face of epic levels of self doubt”, Spencer explains.

That doubt, sadly, wasn’t unfounded. “When Bonds posted our photo on Instagram there was a flood of hateful comments. Bonds did a great job of moderating, but it was quite shocking to me just how much an image of two men with a baby could generate so much negativity.”

We spoke to Spencer about his rocky start to pregnancy, the moment he thought he’d lost Alexis, and why raising their son surrounded by a loving queer community is so important: “we are blessed to be part of such a beautiful, creative and strong community of queer folks. Our son will be surrounded and raised by people living their truest lives. He will see just how rich life can be when you let go of that judgement and let yourself be free.” 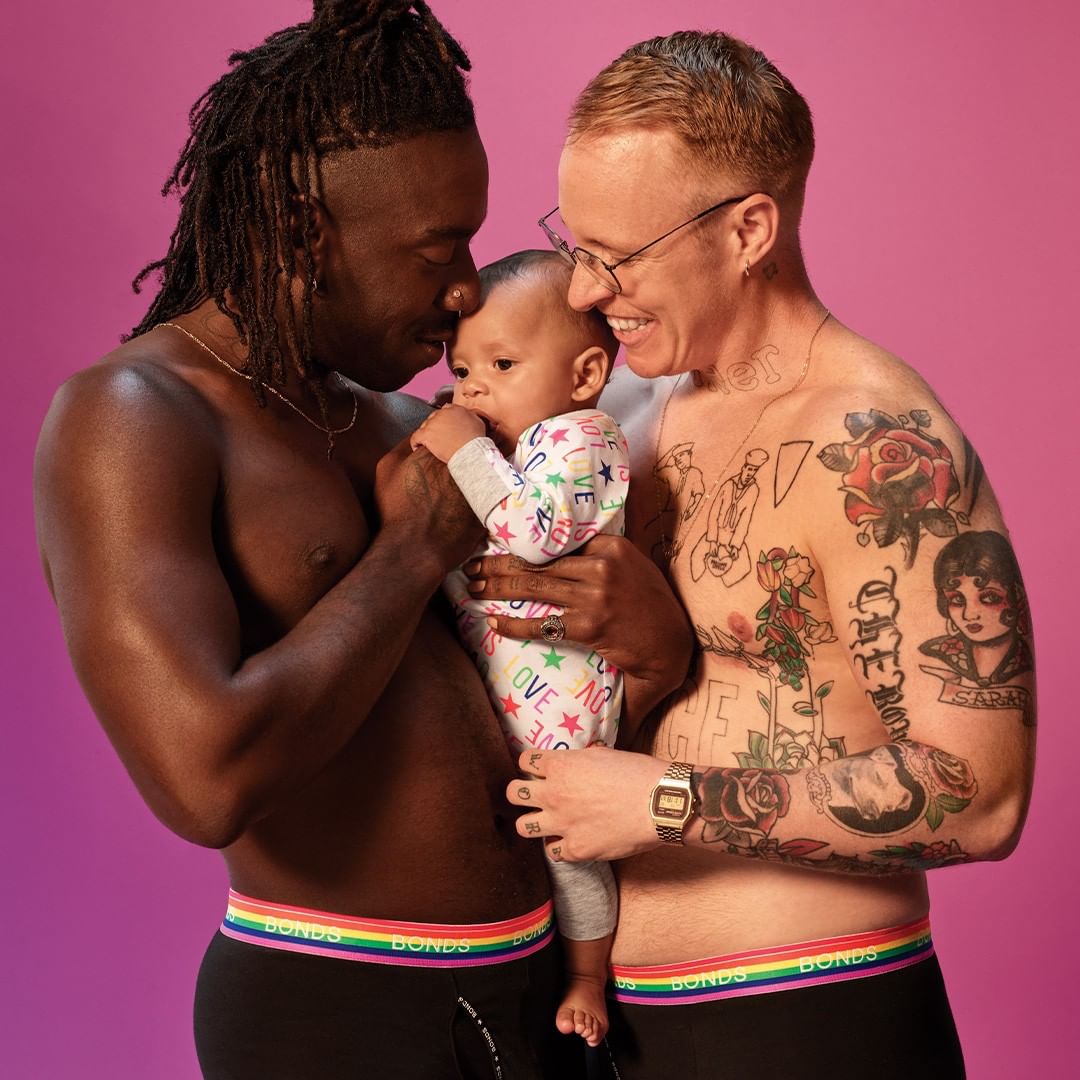 Tell us a little about your family…

We’re two dads with a 6 month old baby boy, Alexis, and two cats. I am Spencer, the birth father of Alexis. I say ‘birth father’ because I am a transgender male who carried and birthed our son. I was born female but transitioned to male over a decade ago. Kelly is my beautiful husband and Alexis’ non birth father.

Congratulations on starring in the BONDS Out Now campaign! Was it a daunting prospect to be featured? Did you have any hesitations?

We actually found out about the audition the day before. We sent in some photos and received a text message that evening, asking us to attend the studio the next day. Kelly is so confident when it comes to be photographed. I, on the other hand, am not. I think after having Alexis I had such a strong sense of pride in what I had achieved. I think that’s what motivated me to go through with the project, even in the face of epic levels of self doubt. Being able to take part in this project as a family was the biggest motivator. Overall it was a beautiful experience.

Were children always on the cards for you? How did you broach that conversation with each other?

I think I have always wanted to be a parent. I broached the topic of having a child pretty early on. Kelly’s response had always been positive, but I don’t think it was something he saw himself doing before we got together. That being said though, it wasn’t until I met Kelly that I had considered carrying a child myself. Being so in love with someone and knowing that a child can be born out of that love is something so magical.

And once you'd decided to take the plunge, was falling pregnant challenging or fairly straightforward?

Falling pregnant for us was actually very challenging. For me to be able to conceive I needed to cease all hormone therapy, and wait for my cycles to return and regulate. This part of the process happened for me quite quickly, but as time went on I just wasn’t falling pregnant. Kelly and I ended up seeing a fertility specialist, and found that we had some issues there, and the only way we could have a baby would be through IVF. IVF is such an intense process. It’s very expensive and emotionally draining. All up it took us 3 fresh transfers, 2 frozen transfers, and 1 miscarriage over a period of 5 years. Alexis was the only viable embryo from our very last attempt. He really is a miracle baby.

Can you tell us about the moment you found out you were pregnant?

I was at home by myself and Kelly was on set of a large art production. I was in what’s known as the ‘two week wait’. Basically, once the embryo is transferred into the uterus, you have two weeks to wait to see if that embryo implants, resulting in a pregnancy. I was one day away from having a blood test when I started bleeding heavily. I was heartbroken. I had been told to stop all medication if I started bleeding, but something told me to take a test before I did that. The test immediately came up as positive. I was in shock. I texted Kelly and told him what was happening. He calmed me down while I am sure, freaking out himself, and told me to call the nurse. The next day the blood test showed that sure enough, we were pregnant! I don’t think we ever really celebrated the pregnancy. We were just too nervous.

How has becoming parents changed your relationship?

Kelly and I had a great relationship before Alexis arrived, and now that he is here, we still have an amazing relationship. We have had a therapist for a number of years now, which has been one of the best things we could have done for ourselves. We spent a lot of time before Alexis arrived talking about what it would be like being parents, and how we ideally would like to parent together. I think now that we’re in it, we’re exhausted but also incredibly calm and supportive of one another. We do our best to give each other the things we need like time to ourselves, sleep, and support. We are doing a really good job of both stepping up to the plate.

The parenting world is full of judgement at the best of times. Did you have any fears about criticism you might face as two men with a biological child?

Sadly, the world can be very judgmental and cruel. I fear for my child being mistreated by people based on his family unit. We will do our best to give our son all the tools he needs to be able to understand where this kind of judgment comes from, and how he and we have done nothing to deserve it. We are blessed to be part of such a beautiful, creative and strong community of queer folks. Our son will be surrounded and raised by people living their truest lives. He will see just how rich life can be when you let go of that judgement and let yourself be free.

And have you experienced much of that judgement? How do you deal with it?

The most hate we have experienced was actually during this campaign. When Bonds posted our photo on Instagram there was a flood of hateful comments. Bonds did a great job of moderating, but it was quite shocking to me just how much an image of two men with a baby could generate so much negativity. I try to not take it personally. We know how beautiful and loving our family unit is. I am happy that our son will never be taught to look at anyone that way.

Do you plan to 'prep' Alexis for some of the more difficult questions he might face, or wait until they happen and deal with them then?

We will tell our son the facts from the very beginning. The more factual information our son has the more powerful he will be to be when it comes to dealing with difficult questions. Children are so smart and open to understanding. They simplify things in the most magical way. No questions that Alexis has for us will go unanswered.

What's been the most surprising thing about parenting?

The absolute joy you feel interacting with your child.

What's been the most difficult?

Do you see more kids in your future?

No more kids for us.

What does a typical day in your household look like?

In the morning we spend time in bed just hanging together, laughing, chatting, and snuggling. We get up and Alexis watches some cartoons while we get ready. I go to work during the week and Kelly stays with baby most days. He is such an amazing father. He takes Alexis on all kinds adventures during the day. Alexis is pretty consistent with his naps and feeds so a lot of the days are based around that. I come home around 5pm and generally take over giving him his bath and dinner, read with him and then put him to bed by 6:30pm. The rest of the evening Kelly and I spend together… being in love.