The Unexpected Joy Of Giving Your Child A Sibling

Home » The Unexpected Joy Of Giving Your Child A Sibling


If you’re anything like me, your heart melted all over the place when you saw the pictures of Princess Charlotte kissing her baby brother Louis...

Now, Chrissy Teigen has added her own unbearably cute shot of her daughter Luna with her newborn brother, Miles. Seeing these kinds of photos aren’t just cute, they also tell a deeper story. Because when you give birth to your second (or subsequent) child, you don’t just give birth to a baby, but to a sibling for your firstborn. And the joy of giving your child a sibling is, in my mind, indescribable. A close friend of mine, who lives halfway across the world, recently had a beautiful baby boy. Naturally, I was thrilled for her. I was also excited to soak in as many delicious photos of her precious newborn as possible. But the photos I love more than the shots of her little man’s cheeks (though don’t get me wrong – I love me some baby cheeks) – are those of her newborn with his big brother. To me, those photos just say it all. Now new research, published in the journal Child Development shows that having a younger sibling has a positive influence on your older child. “Although it’s assumed that older siblings and parents are the primary socialising influences on younger siblings’ development (but not vice versa), we found that both younger and older siblings positively contributed to each other’s empathy over time,” explains Marc Jambon, postdoctoral fellow at the University of Toronto, who led the study. Of course, not everyone wants or can have more than one baby, but for me, it did add another dimension… You see, my oldest daughter was just over two years old when she became a big sister. She took to her baby brother instantly, running over to his cot to check on him, or holding his hands while he lay on his play mat. And my heart, which had already swelled to way over a thousand times its normal size when I became a mother, somehow grew even more. To be honest, I found it so unexpected, too. That’s because, in all my preparation for having a second baby, I never really stopped to think about how much joy the new baby would bring my toddler. I had worried about how having a newborn in the house might affect her emotionally, and whether she would feel jealous, or be able to sleep through the sounds of a baby crying, but I couldn’t have imagined how happy she would be to have a baby in the house. 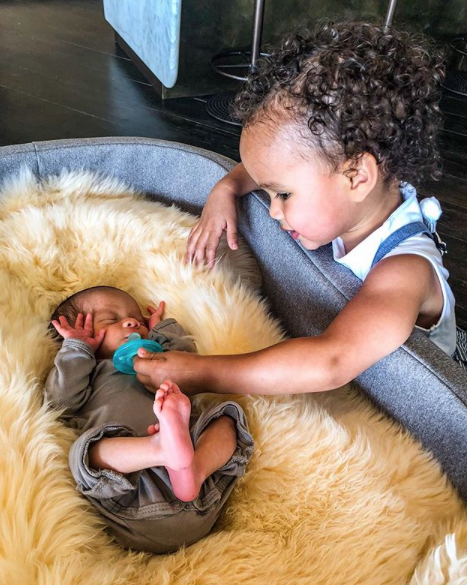 When I was pregnant with my third baby, I had more of an inkling of what was to come. And, as soon as we welcomed our squishy little newborn into the family, I saw my children’s hearts explode too. My third child is no longer a baby anymore. She is now a thoroughly gorgeous (and highly entertaining) four-year-old. And when she’s being cute or sweet, I see her older siblings melt in the same way I do at her antics. In fact, if you ask my older daughter what she thinks of her sister, she’s the first to tell you she thinks she’s the “cutest thing in the world”. Because, the truth is, my youngest child is my baby. But she’s also their baby. So when I saw the photos of the royal family, and of Chrissy Teigen’s little ones together, it brought up all those lovely feelings in me again. And though I have no idea what goes on behind closed doors in either of those households, I bet both sets of parents are marinating in the beauty of sibling love. Words: Evelyn Lewin

The New BING Kids Range Is Here And I...

At The School Gate, I Unexpectedly Found My People

At The School Gate, I Unexpectedly Fo...